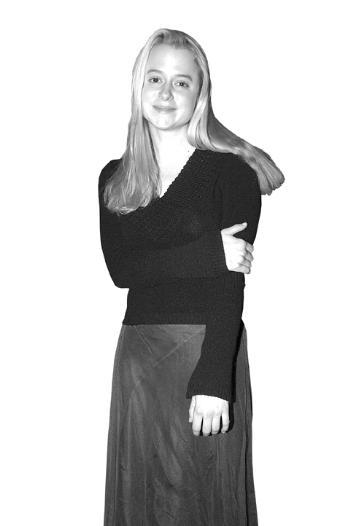 When, at 14, her high school lost accreditation, Mary R. Ziegler left her hometown in Montana for Andover. Once there,
By Simon W. Vozick-levinson

When, at 14, her high school lost accreditation, Mary R. Ziegler left her hometown in Montana for Andover. Once there, she says, she quickly befriended a girl from Indonesia. The only hitch: coming from Montana, Ziegler had no idea where Indonesia was.

“It makes you totally ignorant about everything else,” the fiction writer says of her native state. Sitting in the Barker Center cafe before an afternoon class, Ziegler holds a notebook filled with scribblings in many inks. She thinks about her writing constantly—with a goal of producing three pages of fiction a day, she has to. And inspiration can strike unexpectedly.

“I usually hear something in my head, which makes me sound mentally ill, I realize,” Ziegler reflects.

Ziegler has spent the last few months working with literary agent Esmond Harmsworth on three drafts of a first novel. She says she based its plot —which centers around the disappearance of its narrator’s mute sister—on a real-life murder trial in her home state.

For many Harvard students, Ziegler says, her home state might as well be on the moon. She’s spent the last four years doing what she can to change that, one short story at a time—all of which she’s set in Montana.

Well, almost all. Starting to make that generalization, Ziegler interrupts herself: “That’s not true. One story that won an award was set in Kansas. But it was really Montana.” Ziegler pauses. “I think I liked the rhythm of ‘Wichita.’”

Ziegler is hardly the first author whose fiction takes place in a distinctive homeland. But she readily admits that Montana—once booming with a strip-mine economy, now characterized mainly by casinos, bars and interminable cold—is not an immediately attractive scene.

“It’s a beauty you can’t understand without understanding the despair,” she says. “My hometown is so weird, and rich in its weirdness.”

Leslie S. Jamison ’04, the fiction editor of the Harvard Advocate—which has published several of Ziegler’s stories since her freshman year—says Ziegler’s prose is loaded with repeated phrases and images that “take on this mantra-like way.” Jamison says Ziegler’s work is populated by “people who start as one or two sensationalized details but become fully-realized characters,” including a pair of identical twin brothers and a one-armed fireworks vendor. “She writes fiction in an unusual, complex, cryptic voice full of surprise and mystery,” the agent writes in an e-mail. “She has the ability to write stories that read as if they have been told for hundreds of years.”

Ziegler says she’s honed her literary skills by a variety of methods—including “by failing”—but is not enthusiastic about Harvard’s creative writing program.

“I took a lot of writing classes freshman year and then was told by my agent never to do it again,” she says. “It’s sort of like committing incest. It’s something you never should have done in the first place.”

Though she is still months from sending a draft of her novel to publishers, Ziegler says she and her agent hope her work will create the “big splash” that a short story collection would not make.

“I don’t plan on supporting myself writing,” she says. “Writing is one of my great pleasures, so to make it entirely about money would be bad.”Instead, Ziegler says she plans to go to law school after graduation—a direction that she says was inspired in part by the work she did for two summers with the Refugee Youth Summer Enrichment (RYSE) program, run through the Phillips Brooks House Association (PBHA).

Kerry J. McGowan, the PBHA director of programs who supervised Ziegler’s work there, says Ziegler was able to coax many refugee students into recording their often-harrowing life stories.

“It’s a very hard thing over time...to get these kids to tell these dark stories,” McGowan says. “She did that over seven weeks.”

Ziegler, meanwhile, insists that she got something more than altruistic satisfaction out of the RYSE experience. “Anyone who tells you they’re doing community service purely to give back is lying,” she says. “That, or doing a bad job.”

In her case, she says the writer in her was thrilled to hear the refugees’ dramatic experiences. But they won’t be showing up in her short stories any time soon. “Obviously I’m not just going to go write a book about Sudan,” she says. “It would be so obviously written by someone not from Sudan.”

And after all, it wouldn’t take place in Montana.