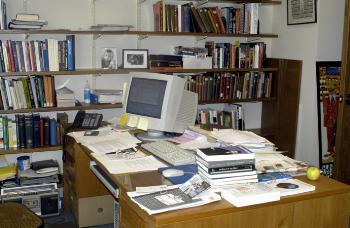 English Literature and Professor of Folklore

Office decoration philosophy: I conclude that this person, female, has exquisite taste and a rigorous and logical sense of order. Her first rule is clarity; second, no clutter; third, despite rules one and two, the order established must not be bloodless or inhumane; fourth, you must make do with Harvard-issue standard materials (lamp, i-book, other desk furnishings) so that the challenge is to make rules 1-3 operate even under the circumstances of rule 4.

Tenure? Not yet, but it is to be hoped.

Alma Mater: If American, perhaps Swarthmore or maybe Oberlin (but my intuition is still Italian).

Grading Style: No clutter in grading either. Simple integers: A,B,C.

Favorite building to teach in: Boylston.

Published books: One, in press.

Works mainly in office or at home? Mainly at Harvard with occasional trips to Bellagio.

Most noticeable neurosis or idiosyncracy: Perhaps a very mild obsessive-compulsive concern with dirt.

Favorite ice-cream flavor: A gelato, for sure, probably one from nuts.

Currently reading: I think one (semi-)professional book, say, something about the sacrifice of women in Greek drama and also a novel, perhaps Süsskind’s Das Parfüm (in German).

In the CD player: Still trying to understand Eminem.

Office decoration philosophy: Minimalist. Keep it simple, don’t give anything away, or students will exploit your weaknesses. Typical example—Student: “Oooh, is that a Cézanne landscape? I love Cézanne. Can you change my C+ to an A-?” Me: “Fuck off.” Also, avoid mixing pastels with autumnal hues. Moose heads are to be avoided.

Department: Classics (a.k.a. The Classics)

Grade Inflation—reality or myth? Insightful question! An A+!!

Favorite building to teach in: The MAC.

Work mainly in office or at home? Home.

Most influential philosopher or thinker: David Hume or Henrik Larsson.

Version of the good life: Score winning goal for Scotland in World Cup final. Save the whale. Win Nobel Prize for watching “NYPD Blue. “ Get to sing duet (“Thunder Road”) with the Boss, despite inability to sing.

Favorite store in the Square: Schoenhof’s

In the CD player: Arab Strap: The Red Thread.

Alma mater: Including some time in (Eastern) Europe.

Grade Inflation—reality or myth? This is Harvard.

Published books: No idea, but I bet they’re good.

Work mainly in office or at home? Harvard. This is a working office.

Most influential philosopher or thinker: Many.

Version of the good life: The sign on the door says it all: ‘Free Palestine! Stop War on Iraq!’

Most noticeable neurosis or idiosyncracy: Likes to group books by colour of cover.

Last movie seen: Something with subtitles.

Favorite store in the Square: Schoenhof’s.

Office Decoration Philosophy: “Decorating?” And “office?” Offices are for work.

Department: English and Folklore and Mythology.

Tenure? How else would a medievalist/folklorist be here?

Alma mater: UGA—that is, Univ. of Georgia, you know, the one with the bulldog.

Grade Inflation—reality or myth? A myth, that is a greater truth.

Grading Style: Careful, detailed up to the end, then blindly liberal.

Published books: Nothing for the coffee table, only articles from the coalface.

Work mainly in office or at home? Harvard is home.

Version of the good life: A world governed by multilateral cooperation or in any case not by George W. Bush.

Favorite store in the Square: I guess Harvard Bookstore is still there, no?

Currently reading: About ten books which will never be finished and one, Mary Beard’s The Invention of Jane Harrison, which will.