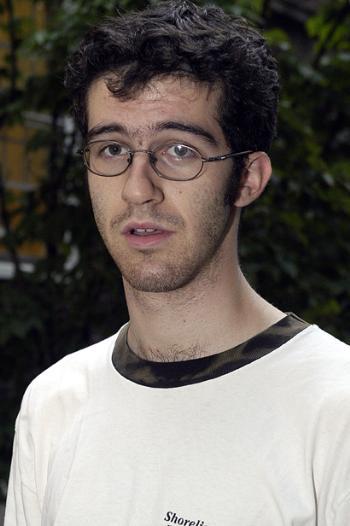 Queer Eye for the Queer Guy

On Bravo television’s sleeper hit of the summer, “Queer Eye For The Straight Guy,” with a snap of their meticulously
By William L. Adams

On Bravo television’s sleeper hit of the summer, “Queer Eye For The Straight Guy,” with a snap of their meticulously groomed fingers, stylish gay men usher clueless straight guys into a whole new universe of hygiene and hip-huggers. Alas, contrary to what the superhero squad of gay transformers on TV might have you believe, not every gay man is endowed with flawless fashion sense. William L. Aronson ’04, a music concentrator in Winthrop House, is the straightest gay man you’ll ever meet. He may have come out of the closet, but he never embraced a stereotypically gay sense of fashion and personal maintenance. He shuns excessive grooming. His closet is full of plaid. He doesn’t even own moisturizer. Watch as FM’s resident beauty expert William Lee Adams ’04, a former Miss Harvard, transforms Will from drab to fab.

FM: What are your expectations for this makeover?

WA: Maybe they’ll give me a cool hairdo or something.

FM: Is there anything about your style that you suspect will be attacked?

WA: I don’t have a very cool hairdo at the moment.

FM: Are you worried about any aspect of the makeover?

WA: They might give me a lame hairdo, which would defeat the whole purpose

of this “giving me a new hairdo” project.

FM: Are you happy with your new look?

WA: Apparently, the hairdo was not the focus of the makeover, which was disappointing. I mean, you didn’t give me a bad hairdo or anything, but I certainly wouldn’t call it a great hairdo.

FM: How, if at all, has this makeover changed your life?

WA: Now that I think about it, I am completely fulfilled.

FM: Have people noticed any difference in your appearance?

WA: Of course not.

FM: What was the hardest part of the process?

WA: Walking into a “day spa” in broad daylight.

There should be two of them.

Flat, matted, and boring, Will might as well be wearing a toupee. He should look 21, not 70.

Slightly messy and combed forward, this retro-coif gives this fashion rebel a cause. Heat-activated Aveda Control Paste makes this style easy to maintain.

Will has an adorable face. It’s a shame he keeps it covered with this thick layer of stubble. His facial hair grows extremely fast, and the thickness makes shaving a pain.

He doesn’t use an exfoliater – the buildup of dead skin cells was our first clue. There are also a few blemishes on his forehead that need to be concealed and controlled.

You don’t have to spend a fortune on skincare, but you should. Your skin is going to be with you your entire life —you might as well take care of it. I recommend the Biotherm Homme line available at Sephora. Will has slightly oily skin and should start each day with Biotherm’s T-Pur anti-shine facial cleanser to keep him shine free while prepping his skin for that crucial morning shave.

To remove those dead skin cells and reveal fresh and healthy skin, I recommend the Biotherm purifying scrub or the St. Ives Apricot Scrub. Only scrub two or three times a week. These products contain microtubules other sand-like particles. Too much scrubbing leads to irritation and blotchiness.

Anti-aging creams are preventative. They will not work once you’ve already aged. Since the skin you take care of at age twenty is the skin you inherit at age thirty, you need to start now. Biotherm makes a fabulous product called “Age Fitness” that uses the ancient secrets of the olive to stop oxygenation, the main cause of aging. In one week fine lines are reduced and skin feels tighter. Take off three or four years from your face. You can look 17 again! Will only used the product once and he’s already taken a year off of his face.

For those unsightly blemishes boys use Oxy 10. Men use Kiehl’s drawing paste with Azulene. It controls surface oiliness and dries out those nasty blemishes in as little as three hours.

Glasses are unavoidable for many of us. Will has great frames that fit the shape of his head nicely. Still, a little variety—a la contacts—would make for a more dynamic look. Wearing glasses every day can lead to oily buildup beneath the nose guards and ultimately acne. Also, glasses need to be contextualized. They’re fine at the library or a quiet dinner; they’re out of place at the club.

From four eyes to two, Will is dead sexy. Along with thinner brows, contacts have really opened up his face.

Harvard is an awful place for your eyes. Late nights lead to dark circles and saggy skin. Will is writing a thesis, so his bags are understandable. But they aren’t desirable.

Will’s eyes have been enlivened with Nickel’s Eye Contour Lift. His tired eyes are now awake thanks to natural wheat and soy proteins.

This shirt is fine to wear in your room—when you’re alone and no one can see you. It screams “I’m in the 8th grade.” The chest hair burgeoning out from the top isn’t appealing. It’s fine to have chest hair. It’s not fine to have overflow. This look is too plain and too “I just got out of bed.” If you’re going to wear that, perhaps you should just stay in bed. Finally, the shirt is too large. Will has a very toned body. He should show it off.

We selected this navy blue button-up with white vertical stripes from H & M ($12) because it frames Will’s neck nicely. The sharp angles create drama and the stiff collar suggests power and confidence. It also fits! The hem where the sleeve is sewn to the shirt should always line up with the joint where the arm attaches to the shoulder. This more blatant display of chest hair now empowers him with virility. His shirt doesn’t try to hide his chest hair like before. It accepts and exposes it. Tight corduroy pants from J.Crew show off Will’s figure.

During and after the makeover:

FM: The wax isn’t going to hurt a bit.

WA: I don’t expect it to. Why do you keep telling me that? This is going to hurt, isn’t it?

FM: Just sit down. This is worth it.

Beautician: Lay back in the chair for me.

B: (applies wax) Is the temperature OK?

WA: A place without pain.

B: Wrong answer. (Rip). Take a look. You look more handsome already. People are going to look at you and they’re going to notice a difference. They won’t know exactly what it is, but they’ll notice.

FM: What do you think?

WA: I’m red. It looks like I just got punched in the face. This is really awful looking. I don’t want to wear these stupid flashy clothes and have this horrible face.

WA: It’s irritated because she ripped skin off of my face and put hot wax on it.

WA: I don’t think adding more stuff to my face is going to help.

WA: This is my hair? Why did I put “control paste” in my hair? What does that even mean? We didn’t do anything to it. You didn’t do my hair. You don’t know how to do my hair. My hair was fine without having been done.

FM: Let’s turn the light off.

WA: No. We need to see what I actually look like. I don’t think you should have photographers do this today.

WA: It’s awful. No, it’s really awful. You have no sense of fashion or taste. I could have shaved myself. I can take care of myself so much better than you people. I’m not going to this photo shoot. I look like Quasimodo. I look like Rocky at the end of Rocky.

FM: The contour eye lift really helped your eyes out.

WA: Are you kidding me? I can’t believe you pay money for this crap. Look at my swollen eyelids.

WA: You mean the shaving? I shaved myself. Maybe that did make a difference but I do that on a regular basis.