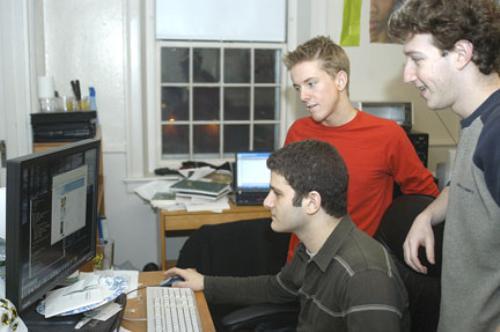 At Harvard, fun comes with a side of intellectualism, or vice versa. House spirit enthusiasts keep statistics on IM sports,
By Sarah E.F. Milov

At Harvard, fun comes with a side of intellectualism, or vice versa. House spirit enthusiasts keep statistics on IM sports, classics concentrators meet for a night out speaking only Latin, and now it’s time for Harvard’s latest obsession, thefacebook.com, to face hard-core intellectual analysis.

Since the advent of the internet, sociologists and anthropologists have been scrambling to make sense of the social phenomenon. The academics, though, are often behind the times, writing about a fad a year after it’s passe. For instance, researchers of online social networking still study the chat room craze, even though many people exited chat rooms for good in the mid 90’s.

Ever since thefacebook.com sprung into the Harvard collective consciousness like a Trojan-horse virus, thinkers have been analyzing the social implications of the website’s success.

One such thinker is John Norvell, a lecturer on Anthropology who teachers Anthropology 199: Life On-Line: Culture, Technology and Democracy. Norvell defines community as simply “any place where humans interact.” In this sense, Thefacebook.com represents an online community—in addition to the nail-biting process of requesting new friends, the website has features that allow you to poke and send messages to friends already on your list. It practically eliminates the need for real interaction.

But the website’s creator, Mark Zuckerberg ’06, has a different conception of community. Zuckerberg does not view the site as a place where community is formed. He views it as a tool to strengthen a network that already exists in real-life. “I’m more interested in seeing how [the site] affects community. It’s a subpart of culture,” Zuckerberg explains.

Though he admits that thefacebook can be a cool way to achieve that long-sought-after popularity, Norvell remains skeptical that the site is revolutionary. “The issue of social networking software is that it’s not clear what people do with it,” Norvell says. Such sentiment is often echoed by the rare but stubborn facebook holdout who refuses to join the site because “there is no point.”

The site’s consultant and Zuckerberg’s roommate, Christopher R. Hughes ’06, might have an answer to Norvell’s question. Hughes, who is largely responsible for figuring out the social aspect of the website (as opposed to Zuckerberg, a self-described “dumb programmer” who is mainly in charge of the technical functions), sees thefacebook as a way to tighten pre-formed bonds. “It’s a tool to help people improve social relations by networking with people you only know tangentially,” Hughes says.

In this way, he says thefacebook has lubricated social interaction that may have previously been stressful. Hughes explains that after adding people to his friends list, “I say hello to people I had section with but didn’t know whether or not to say ‘hi’ to. So now when I pass them on the path we can say hello or strike up conversation.” Additionally, Zuckerberg points to the functional aspects of the website that allow people to find cellphone numbers and AIM screen names.

Zuckerberg agrees that the greatest impact of the site has not been with people that are already close, but with people that only know each other casually. Some claim that this has lead to friend-inflation—that users are not truly friends with the people on their lists. This has prompted comparison to friendster.com, a site in which strangers linkup based on information in their personal profiles.

Zuckerberg scoffs at such a comparison. Zuckerberg explains that, “one main difference is that [the facebook] is not a dating site. The type of information on the site is fundamentally different. People aren’t as biased in how they represent themselves.”

Norvell agrees that an online community might not be a distinct entity from an actual community. He explains, “The current undergraduate population came of age in the information era and takes it for granted. There are no distinctions between online lives and offline lives.”

Part and parcel with this generation’s online immersion are the sites that Novell actually sees as revolutionizing modern life, for instance the USENET discussion groups, where users coalesce around a common interest, such as Britney Spears or computer programming. People exchange thousands of messages daily through the site.

Another online trend that Novell has studied, Blogging, represents a burgeoning possibility for online social networking. At Harvard, for example, a junior professor, Michael Watkins, used the Law School weblog to sound off on problems he saw with the Harvard Business School process. Watkins was not awarded tenure, and his post generated many responses and a general discussion about the process. Phenomena like this catch the eye of people like Norvell because they represent new and revolutionary ways that people are coming together to discuss ideas.

While heavy ideas may not be part of thefacebook ethos, the site’s revolution has an impact on students. The sociological heavies might have their eyes elsewhere right now, but amateur anthropologists like Zuckerberg and Hughes are changing daily lives, one poke at a time.