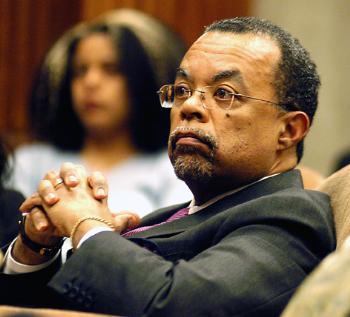 The latest public installation by conceptual artists Christo and Jeanne-Claude, like all their works, inspired a broad spectrum of responses
By Simon W. Vozick-levinson

The latest public installation by conceptual artists Christo and Jeanne-Claude, like all their works, inspired a broad spectrum of responses from the critics. The Washington Post’s David Segal called “The Gates”—7,500 pairs of 16-foot-tall poles with billowing saffron-colored fabric hanging below, which lined the walkways of New York City’s Central Park for 16 days, ending this past Sunday—“biblical.” Lowell House Master Diana L. Eck, a professor of comparative religion and Indian studies, ventured into her House’s courtyard last week in the dead of night to erect a solitary mini-gate she had created from scratch. My mother, meanwhile, refuses to refer to the display by any name other than “The Shower Curtains.”

But one burning question remained. What did Du Bois Professor of the Humanities Henry Louis Gates Jr., the distinguished scholar who chairs the Department of African and African American Studies and goes by the nickname “Skip,” have to say about all this?

To find out, I called the intellectual star at home on Monday afternoon.

Fifteen Minutes: Hi, Professor Gates. Did you have a chance to see “The Gates?”

FM: So would you say you skipped “The Gates?”

SG: [Enthusiastic laughter.] No. Good try, but no. I have not skipped the gates.

SG: You had a good pun and you were hoping I would say that.

SG: I have a broken leg, so I’m stuck at home....You can quote me as saying that: “I look forward to seeing the gates.”

FM didn’t have the heart to tell Gates that the installation closed the day before our chat, but we are thoroughly pleased with the results of our investigation. Next week: FM rings up Lincoln Professor of History Drew Gilpin Faust, Dean of the Radcliffe Institute for Advanced Study, and learns how it felt to sketch Lucifer’s accomplice.