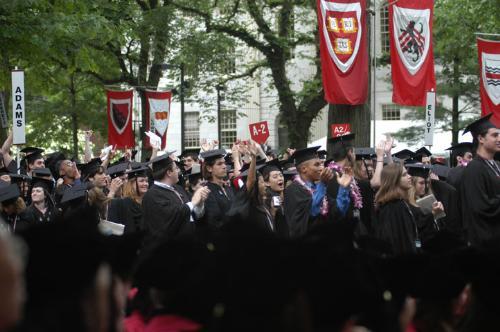 The words roll right off the tongue. “Oh me? I graduated from Harvard. With honors.” It used to be that
By Daniel J. Mandel

The words roll right off the tongue. “Oh me? I graduated from Harvard. With honors.”

It used to be that most of us could start practicing our delivery long before we actually got the precious degree. This June, however, the University will implement new standards that will slash the number of honors recipients by almost half and reveal a large percentage of us as total posers.

In May 2002, the faculty approved changes to the system which will cap honors designations at 60 percent of each graduating class—a far cry from the 90 percent who left this place with Latin insignia on their diplomas when designations were based on GPA cutoffs. This year will be the first that seniors will graduate under the new system, and some members of the Class of 2005 have already begun to protest, citing confusion and lack of transparency.

Hani N. Elias ’05, like most Social Studies concentrators, went into the field assuming it was honors-only. He says that word didn’t reach the students that changes were going into effect until late last year, and he is unsure whether the hard work he did on his thesis will translate into the Latin honors he thought he was guaranteed.

No one in the Class of 2005 can know for sure what the new rules will mean come June, but unavoidably, about 600 seniors who would have gotten honors last year will leave Harvard with only a diploma.

The administrators behind the change believe this is actually a good thing. The new policy, they argue, will make students worry less about grades and think further ahead about their education.

Assistant Dean of the College John O’Keefe, a staunch defender of the new policy, admits that the higher standards are bound to have some side effects. But those are hard to know before the change takes place. The first few classes to swallow the bitter pill will serve as guinea pigs for the new system.

When did honorifics get so commonplace?

“Grades have been going up since they were invented in the late 19th century,” O’Keefe says.

Things really took off in the 1970’s, when mean GPAs and honors rates climbed steadily before leveling off in the mid-1990’s. By then, a huge majority of students were graduating with some form of Latin honors.

The flood of honors continued unchecked until the 2001-2002 academic year, when the Educational Policy Committee (EPC) began one of Harvard’s periodic reviews of its grading practices. Discussions with each department revealed “considerable concern” with the system, launching internal deliberations about how to proceed, former Associate Dean of the College Jeffrey Wolcowitz writes in an e-mail.

Not long after, the Boston Globe publicized “Harvard’s dirty little secret” in a two-part front-page investigative piece called “Matters of Honor.” The story set off a storm of controversy as other Ivy League officials delighted in publicly mocking the Harvard honors system. The College knew that something had to be done. A series of proposals were eventually approved by the faculty in a unanimous vote.

O’Keefe insists that the changes were not made “because we wanted to look good in the New York Times.” Rather, he argues, it was a shift “motivated by concerns from faculty and students that wanted Latin honors to mean something to the world outside.”

As for those losing out because of the new rules, administrators and department heads alike express some sympathy. After all, had the Class of ’05 been born one year earlier, they would have had a much better shot at earning honors. But university officials stick to their guns, maintaining that the changes are necessary.

“A world where we’re giving honors to 90 percent of the class is a world where nobody’s getting honors that are meaningful at all,” O’Keefe says. Now, he reasons, each level of honors has that much more value for its recipients and the employers and graduate schools who take them.

Many seniors fear that failing to get honors will hurt their chances with graduate school and potential employers.

Some seniors are still unhappy about the change. Elias, the Social Studies concentrator, criticizes the implementation of the changes, saying that they were not sufficiently publicized or explained to the people they will affect.

“Most students don’t know too much about it yet in grades above me, including seniors,” says Amadi P. Anene ’08, a member of the Undergraduate Council’s Student Affairs Committee. “I ask them, ‘What do you think about the new Latin honors system?’ and most students aren’t aware of the changes yet.”

Originally, the idea was that the class of 2005, then only freshmen who had not yet declared their concentrations, would be the first group of students to be subject to the new rules.

According to Wolcowitz, “The implementation was postponed so as not to change the rules for students who were already in concentrations.” Although the University appears to have made the changes public as early as 2002, when a Crimson report outlined the changes the day after the vote, current seniors say they were surprised when the question of honors came up at the beginning of this year.

Now that the new system makes honors more meaningful, students might be encouraged to think about factors that affect it earlier in their Harvard careers.

As O’Keefe points out, the new rules may affect the academic choices students make, such as whether or not they will write a thesis, or whether they will take harder classes. That’s why members of the Class of 2005 are upset—they say they did not have that luxury due to the University’s “failure to communicate.”

No one can say for sure how these changes will affect students’ choices about their academics. Fundamentally, though, the issue seems to be about risk, and how willing Harvard students will be to challenge themselves in the face of higher standards. Potentially, Bernstein says, the new system could discourage students from taking risks in hopes of earning honors. But by the same token, O’Keefe counters, students could feel liberated from expectations because honors will no longer be the norm.

Maria Trumpler, Allston Burr Senior Tutor in Quincy House, points out that the policy change will have the positive effect of destroying the stigma surrounding non-honors graduates. In the past, some students have shed tears, Trumpler says, because speakers made jokes during Class Day celebrations at the expense of the 10 percent who left Harvard without honors.

Some other unfair jokes should fade as well. At least this way, we won’t get made fun of by the other Ivies.