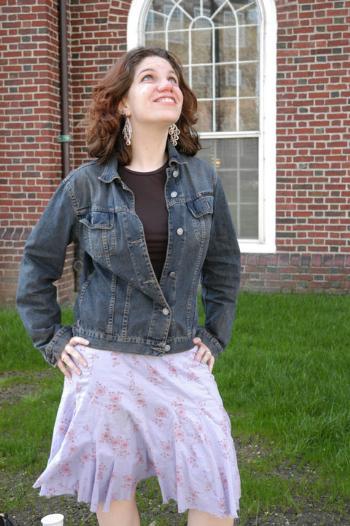 God and I have always had a complicated relationship. I attended a progressive Jewish day school, where I had an
By Sarah M. Seltzer

God and I have always had a complicated relationship. I attended a progressive Jewish day school, where I had an early insight into religion’s hypocrisies—but was indoctrinated with Reform Judaism just the same. I hated the sycophants who revered the rabbis and cantors for all the wrong reasons. I hated the way my teachers wore their observance like a badge of pride—yet so frequently exhibited pettiness. And as I studied Jewish history, I hated the persecution foisted on my ancestors by so many other groups that claimed their authority from God.

But I didn’t hate going to temple: I enjoyed sermons about how to live a better life, I felt uplifted by the stories, the songs, the togetherness. Along with my twin brother, I became a bat mitzvah. During my speech, I spoke proudly about my religion, while making a dig at Orthodox synagogues that didn’t allow women to read the Torah. That contrast summed me up.

After I moved to a secular school, the contradictions continued. I eagerly took to heart an essay my eighth grade history teacher made us read that said “all religions are paths up the same mountain.” I pondered becoming a Jew-dhist when I learned the philosophy of Buddhism later in the year. But I grew uncomfortable when the same class spent just a bit too long discussing the story of “how the Jews killed Jesus.” Religious coexistence, I realized, was never that simple.

At some point during high school, I found my mantra: organized religion was an oxymoron. How could a hierarchical institution be a vehicle for transcendence? I shocked my AP English class when I wrote a biting two-page satire in rhymed iambic pentameter about how hypocritical the high holidays were. Nonetheless, I chose to fast and attend services on Yom Kippur. The ritual made me think about the world’s hunger. It cleared my head. I was touched by the communal confession of sin (I couldn’t help comparisons to that other religion’s mode of confession) and the final prayers as the sun set. It was a beautiful observance.

By the time I was a teenager, many of my friends, even my brother, were proud atheists. I was impressed by how sure, how confident they were that there was nothing out there.

I felt that I could mock religion and still experience it.

What I couldn’t do was just not believe. Like many people with an artistic temperament, I worshipped the world’s mysteries—mountains, the ocean, art, and poetry—to the point of rapture. Anything I thought was beautiful brought me to tears. I loved my family and friends so fiercely that I frequently prayed for their safety, for our continued happiness. Belief of some sort seemed the only concept that could contain the intensity of my feelings. I dismissed the idea of a God who created humans, but a God who came from the human spirit (an idea that my parents had introduced to me)—I liked that. God could be altruism, love, kindness, happiness. God could be what pulled us away from our instincts to be cruel and competitive and distrustful. Although my most sacred experiences were far away from synagogue—on a lake in the Alps, a snow-covered field in upstate New York, or hearing the opening chords of a packed to the hilt Bruce Springsteen concert—I couldn’t fully break ties with religion.

But then came Sept. 11th and its aftermath, and everything changed. My cynicism about organized religion intensified even more. Because of some religious fundamentalists, part of my city was gone forever. And because of that event, religious fundamentalism of a surprisingly similar ilk captured the heart of our country. The use of religion by Bush and his cohort to manipulate America is one of the most appalling phenomena I have ever witnessed. It ate away at me, filled me with disgust. The opiate of the masses indeed, I thought.

My anger at all religious extremists reached a fever pitch—from the fundamentalist Jews and Muslims who won’t allow their brethren to achieve peace in the Middle East, to Mel Gibson, to the idea of a new pope who continues to oppose birth control and marriage for priests.

And then the Tsunami came on Christmas. As I watched the umpteenth commercial for Christmas sales while I obsessed over the dead children washing up on the beach far away, I couldn’t believe that the irony of the situation was being overlooked. How could people think that life was the product of a master plan? Didn’t people wonder whether our money and arms—much less our hearts—were in the right place?

My questions have changed. Instead of “don’t people realize that all religions are essentially the same?” I’ve begun asking “Why don’t people doubt their religious doctrine?”

And I’ve had to acknowledge, at first quietly and then more loudly, that my “agnostic” self-definition was atheism in disguise.

I deeply admire the progressive religious figures who stand up to the fundamentalists and say “You are committing evil in God’s name” (and who always omit gender-specific pronouns in their prayer books). It’s those faithful people who ordain women, gays and lesbians, and express their respect and even love for those who believe differently. They will remind you that Osama bin Laden, George W. Bush, the IRA, Hamas, the settlers on the West Bank, even the Pope, are all perverting the true meaning of religion (in different ways, to different degrees) for their political gains. They will tell you that just because religion is used for evil doesn’t mean it can’t be used for good too. I hope more people listen to those voices.

But I can’t help thinking cynically that there’s an inherent problem with religion. When a liberal religious figure says “God says this” and a conservative one says “nope, God says this,” guess who usually wins?

I believe in worshipping and fighting for what Samwise Gamgee (another spiritual figure in my life) tells Frodo is “the good in this world.” I love my favorite holidays—Passover and Yom Kippur, and still feel moved when I celebrate them. I believe in holding our finer instincts in reverence. But these days, I’m happy to leave religion to the religious right.

Sarah M. Seltzer ’05, who was Magazine Editor in 2004, is an English and American language and literature concentrator in Lowell House. She still believes in the glory that is FM.