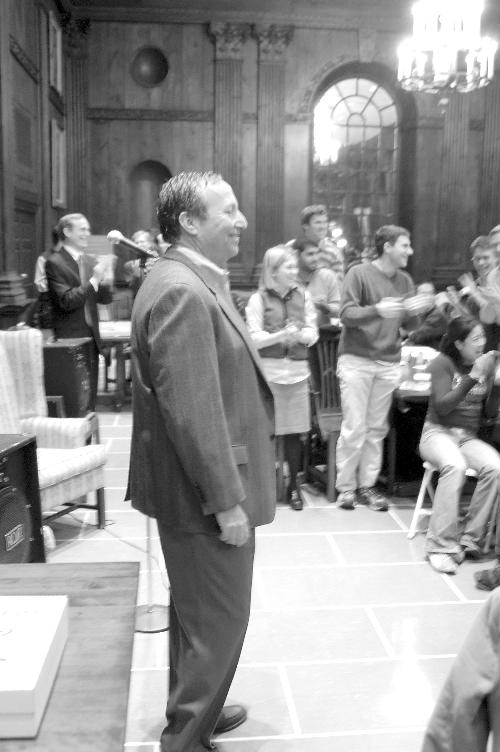 Larry has left the building, but who will be next to enter Mass. Hall? By Meaghan J. Beattie
Advertisement
Advertisement

Hundreds of interviews, tens of thousands of dollars, and weeks of clandestine meetings are par for the course when searching
By Shannon E. Flynn and Nicola C. Perlman

Hundreds of interviews, tens of thousands of dollars, and weeks of clandestine meetings are par for the course when searching for a new University president.

Which is not surprising, considering that Harvard is looking for a person to fill possibly the most prestigious and stressful position in the academic world.

Harvard has had four presidents over the past 50 years, and each has made a significant contribution to the University. But from Nathan Pusey’s hardline approach to student protestors during the Vietnam War to Lawrence H. Summers’ ill-advised comments about women in science, it seems talk of their faux pas outlives memory of their contributions. While more recent presidents have exited gracefully, several of the past century left under controversial circumstances.

The hunt for Harvard’s next fearless leader begins when the Harvard Corporation—the University’s governing body—appoints a seven-member search committee, which traditionally includes neither faculty nor students.

“The search is the responsibility of five Corporation members along with one or two members from the Board of Overseers,” says Charles P. Slichter ’45, who served as a member of the Harvard Corporation and participated in the searches that tapped Derek C. Bok and Neil L. Rudenstein.

“It’s important to have these overseers partake in the search because the final consent must come from the Board,” he says.

However, the search committee doesn’t make its decision in a vacuum. According to a Garrett T. Graff ’03, a former Crimson editor who covered the search that produced Summers, each member of the search committee meets with hundreds of people, including prominent alumni, faculty, and leaders in non-academic fields. Each interview lasts two or three hours as the search committee tries to narrow down the field. The Corporation imposes a strict policy of secrecy, and none of the presidential potentials are informed that they are, in fact, candidates. As a result, campaigning is kept to a minimum.

“If you’re qualified, the Committee will show up at your doorstep,” says Graff.

Initial meetings take place in the offices of interviewees, but as the search proceeds, candidates are flown to law offices and hotel suites to maintain the veil of secrecy. According to The Crimson, Summers’ final interview was held in the Presidential Suite of the Boston Harbor Hotel.

FROM ONE TO THE OTHER

While the length of Summers’ tenure—the shortest since the Civil War—might be unusual, the onslaught of criticism at its close is by no means unique. Bass Professor of English and American Literature and Language Louis Menand recalls controversy surrounding presidential searches dating back to 1909. President Charles William Eliot, Class of 1853, transformed Harvard into a research university. Forty years later, a lack of structure in the curriculum led to his ouster. His successor—A. Lawrence Lowell, Class of 1877—created the concept of the concentration. Lowell, in turn, came under fire for his racism and anti-Semitism.

A search committee installed James B. Conant ’14 in 1933, who helped create the SATs and developed a more meritocratic university, according to Menand. After Conant, Nathan M. Pusey ’28 presided for 18 years, and his tenure saw a marked return to conservatism.

But just because Pusey tried to be a straight shooter doesn’t mean he could avoid controversy. After calling the police on University Hall protestors in 1969, Pusey fell out of favor and resigned two years later.

According to a Crimson news article from June 1971, the search for President Pusey’s successor was “unprecedented in the history of any American college,” spanning nine months, considering over 1,200 candidates and costing a whopping $40,000 (translated to today’s dollars, that comes out to about $190,000).

Dean of the Law School Derek C. Bok was ultimately selected from a final group of 23 aspirants from the three target groups of the Committee: internal candidates, external academic leaders, and prominent intellectuals—including public servants and government officials. After Pusey’s lack of concern with the student body, Bok’s vision and tact were a welcome change.

Unlike many of his predecessors, Bok exited with little controversy after a successful 20-year tenure.

Following Bok’s long and popular administration, the search committee looked to Rudenstine for a quiet tenure, an increase in faculty salaries, and the enlargement of the endowment. After Rudenstine’s success in raising the money, the Board wanted someone to spend it. Their final choice: Summers.

Based on this reactionary pattern, the next president might be a conciliator, favored by the faculty and supremely tactful.

“Whoever comes in next first has to deal with the unique goal of responding to an unhappy faculty,” says Graff.

It seems like anyone would jump at the chance to become president of Harvard University. Recent events and complications, however, may make possible candidates wary.

The implementation of Summers’ plans for the Allston Campus will fall to his successor, who might have little input in the development. In addition, the incoming president will have to deal with the Curricular Review, which Summers put into motion. According to Menand, recent events are “unfortunate because the momentum was there in spite of all the troubles.” But Menand feels that the faculty will still have significant input in the future of the Curricular Review, which should take the onus off of the heir to the throne.

But no matter what questions the future president of Harvard has to answer, everything depends on who gets chosen to sit in the hot seat.