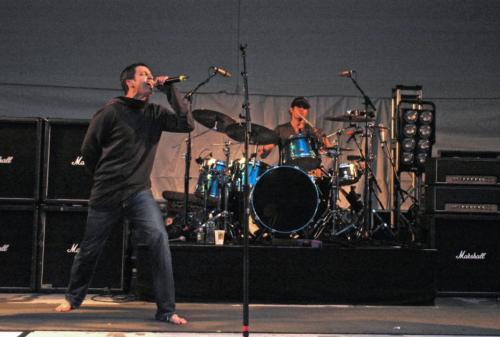 “Is it weird that you go to Harvard?” he asks, lounging in flip-flops, faded jeans and a gray sweater which elongate his thin frame. “Have you published yet? You better,” he says. “If you don’t go out and cure cancer, you’re fucked.”

Jenkins then went on to imitate the H-bomb dropping awkwardness. “I have to acknowledge that I’m better than you because you didn’t get in. That’s why you go to BU,” he mimics. Quick to offer advice, Jenkins follows with his idea of how to answer the notorious question: “From now on, you should just go, ‘Harvard, bitch.’”

UP YOURS, MR. SMILEY

It’s a fuck-the-world attitude that Jenkins has adopted only too well, lambasting everyone from the President to Matchbox 20. Somewhat surprisingly, though, the person to get the most heat is not Rob Thomas, but Jenkins’ sixth grade teacher.

“I was just a kid with dyslexia and ADD and he was a teacher with a fairly low IQ,” says Jenkins. “He told me that he thought that I wouldn’t graduate high school and that like some other guy, I’d probably be in a juvenile hall. I was never in juvenile hall. I’ve never stolen a lollipop.”

Not only did Jenkins honorably abstain from lollipop thievery, he also graduated valedictorian from UC Berkeley—“You know Berkeley right? We have more Nobel laureates than you?” He jokes...somewhat seriously. And, in a true, Jenkins fashion, he returned home to confront his former intimidator.

“It was simmering with violence,” says Jenkins of the confrontation. “It was wonderful. I reminded him of what he said to me when I was in 6th grade...Time for you to be scared of me and he was. This place is still a fucking mess. It was great. Terribly uncomfortable.”

It’s this sort of violent, aggressive speech that has gotten the front-man in trouble before, like in 1999 when Blue’s “Slow Motion” became a lightening rod for criticism. But, before defending the song, Jenkins does something eerie: he recites all the lyrics, including lines like “But girl if you would let me/ I’ll take your pants off/ I gotta little bit of blow/ We could both get off” with a half-smile on his face.

“[It] was one of our biggest hits,” he says, calmly, when he finishes. “The point of the song was to be as nihilistic as possible. Fans get it. They get the irony of the song.”

As Hip-hop reinterpreted by a lite-rock group, “Slow Motion” is a barbed criticism at the overly violent songs that Jenkins feels dominate the hip-hop music scene. And while his other hits might not have such lofty ambitions, the self proclaimed “lyrical band” aims to do more than simply please tweens across the country.

“Russell Simmons says ‘Oh, we’re just telling it how it is.’ But I was living in lower Hayes Valley at the time, across from projects and that was not how I was seeing things—they were kind of mundane and most people wanted to get out.”

And after establishing his street cred, Jenkins felt free to also take on race-relations. And why not? He is Third Eye Blind...

“You are black and Polish and Portuguese. You are a mutt,” he says, pointing and gesticulating emphatically. “We are mutts. Race is just falling away so quickly and yet in this country, it’s still our unfinished business...The other side is that it’s this strange concept of black self-hatred, but if you’re not black you don’t get to talk about it. Well I do get to talk about it.” Clearly.

And race isn’t the only thing he gets to talk about, as Jenkins next launches into a tirade on the Bush administration: “We were standing around like ‘oh yeah, the Patriot Act,’” he says. “Someone bombed a building, let’s give up our rights, we sort of lost track of what we’re protecting… We all were pissed about 9/11 and we wanted to kick ass. I think everybody felt that way, and Dick Cheney took that ball and ran with it, and manipulated us like a horde.”

But while Jenkins feels comfortable bad-mouthing almost everyone, there are some things, in the world of rock, that are sacred.

“The altar of U2 is a place where I would kneel,” says Jenkins. “We did 11 dates with them. We were just super brand-new and we were at some gigantic stadium and Adam Clayton walked in with a case of Guinness,” says Jenkins with boyish glee. “Isn’t that great? He walked in with a case of Irish beer, he just walked in, and I was just star-struck to see him...I see The Edge—and they really do call him the Edge—and he goes ‘Hello Stephan’ and I go ‘You know my fucking name?’ and that was so heavy.”

It’s when talking about (and name-dropping) his music legends that Jenkins’ quick-tempered personality subsides. Midway through the interview, his Razr rings. As he apologizes, his face begins to light up. “It’s Bryan, the drummer from Guns ‘N Roses!” Says Jenkins excitedly. “Will you answer my phone if I call you back and not screen my call?” He asks his famous caller. “K. Brotherhood.”

Indeed, Jenkins sees his band as the latest in the “brotherhood” of rock. “We’re really more of an indie rock band,” he says. “An underground band, that happens to have fancy tunes.” And, according to Jenkins, a band that is back in the game.

“Two years ago, I wanted to make a solo record,” he says. “I didn’t feel like Third Eye Blind was relevant. And then something changed and now I think it actually is relevant. It actually is in the present tense.” Which apparently means 3EB fans are ready to look forward.

“Why were there 7000 people in Indiana when we just played there?” He argues. “They didn’t come there to hear ‘How’s It Gonna Be.’ That’s not why they showed up.”

True. But it wasn’t enough to draw most of the Harvard student body, either.