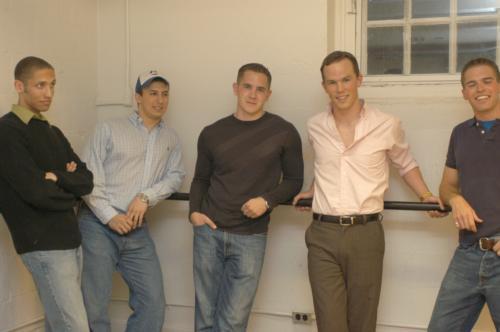 It’s no mystery that students at Harvard are weird. If we were smart enough to get in, something must be
By Julia M. Spiro

It’s no mystery that students at Harvard are weird. If we were smart enough to get in, something must be wrong with us. But many of the neuroses of the undergraduate student body extend beyond perfectionism or compulsive spell-checking. You know how some people have Freudian complexes? Well Harvard students have complexes often so deep and carefully hidden that they only reveal themselves after several weeks of dating (“dating” is a loose term at Harvard; what I really mean is “a few dance floor makeouts and late-night texts”). Here are some of the crazies to look out for.

The “Well, I don’t exactly go to Harvard” Complex

Taking classes at the Extension School does not make you a Harvard student. These faux-students linger in the Barker Center or the Garage Starbucks, pensively writing (not typing) away in their notebooks in hopes of fitting in with the rest of the undergrad population. Unless they’re upfront with you right away, don’t bother: the only thing more screwed up than actually being a Harvard student is pretending to be one.

The “I just want to blend in” Complex

The flannel shirts, unwashed hair, and old L.L. Bean backpack are just props, so don’t be fooled. At first glance, this guy wants you to think that he isn’t a published author, a member of a rock band, or heir to a massive fortune. But don’t be surprised when you find yourself next to him on a futon listening to him bemoan his childhood of privilege and gush about how he’s so grateful that at Harvard he can just be a normal guy. If he really wanted to “get away from all that superficial bullshit” and go unnoticed, he would have gone to Arizona State, joined a frat, found a girlfriend named Brittany, and called it a day.

The “next Zuckerberg” Complex

Just because Zuckerberg got lucky doesn’t mean that wearing a hoodie sweatshirt everyday and being a perpetual asshole will make you lucky as well. These guys are so insecure that they figure their best bet is to act like huge dicks in the hopes that, upon inventing some radical Web site that instantly earns them billions, they will be able to say a satisfying “suck it” to all those girls who refused to do so.

No, sweetie, you’re gay. And that’s great! But do us all a favor and save your energy pretending to be something else. If you’re a gal lusting after a guy who wears skinny jeans, sports a messenger bag, is an English concentrator, and has an Asian fetish, you should just give up right now—he will never have sex with you, even if he tries.

Most kids who wind up at Harvard feel a lot of pressure to succeed, whether from within or from their parents. But there are some guys in particular who feel it on a much deeper level, and this obsession with becoming the perfectly educated, groomed, sculpted epitome of the Harvard Man (think “American Psycho”) consumes them, making them some of the most neurotic people on campus. If he carries a custom-made business card holder with him when he goes to the gym, run.

This type can be seen at many colleges but is most relevant at Harvard. After a few months in the Yard, students start unknowingly lowering their standards. Suddenly, the girl who never could get the attention of that stud hockey player in high school is hot shit, and she knows it. This new and powerful surge of confidence often goes straight to their heads, making them totally conceited and bitchy, when the hard (and ugly?) truth is that they’re only “pretty...for Harvard.”

The “Phi Beta whatever” Complex

These girls are some of the most philanthropic on campus because they’re always thinking of others’ feelings (he just looked so sad!). But they’re also always thinking of ways to pretend that they go to UVA instead of Harvard, when they should just face the fact that Harvard is not a Greek system kind of school. These girls like to think they know how to party, but more often than not, they can’t hold their liquor and wind up in UHS. Then again, I’d probably also throw up if I went to a Greek formal.

The “TYPE A” Complex

While this complex can certainly apply to guys as well, it seems to be most common among female undergrads. This is the kind of girl who never received anything below a 100 percent on any school assignment. Ever. But the complex goes beyond grades; it’s the kind of obsession with perfection that makes this girl a total psycho. Common symptoms include developing an eating disorder, having a fling with a TF in order to get a higher grade, and moving into a single just two weeks into freshman year after being convinced that her roommate is stealing her granola bars.

Gender equality has come a long way at Old Boys’ Club Harvard, but there are a certain number of female undergrads who just aren’t ready to give up the fight. Unless you’re a guy who is willing to always be spoken down to, always be wrong, and regularly be mocked in public, stay away from these confidence-killing, ego maniac future litigators and politicians.

The “I’m looking for a man, not a boy” Complex

Unless you’re a Business School student with your own startup, don’t count on these girls giving you the time of day. They will use you to get alcohol or to get into your club’s party, but they’re on the lookout for someone with what they consider a little bit more maturity, class, and sophistication. And that’s exactly how I would describe a 30-year old HBS student actively pursuing a 19-year-old undergrad.

—Staff writer Julia M. Spiro can be reached at jspiro@fas.harvard.edu.

For more information on the ins and outs of Harvard life, visit the My First Year homepage.