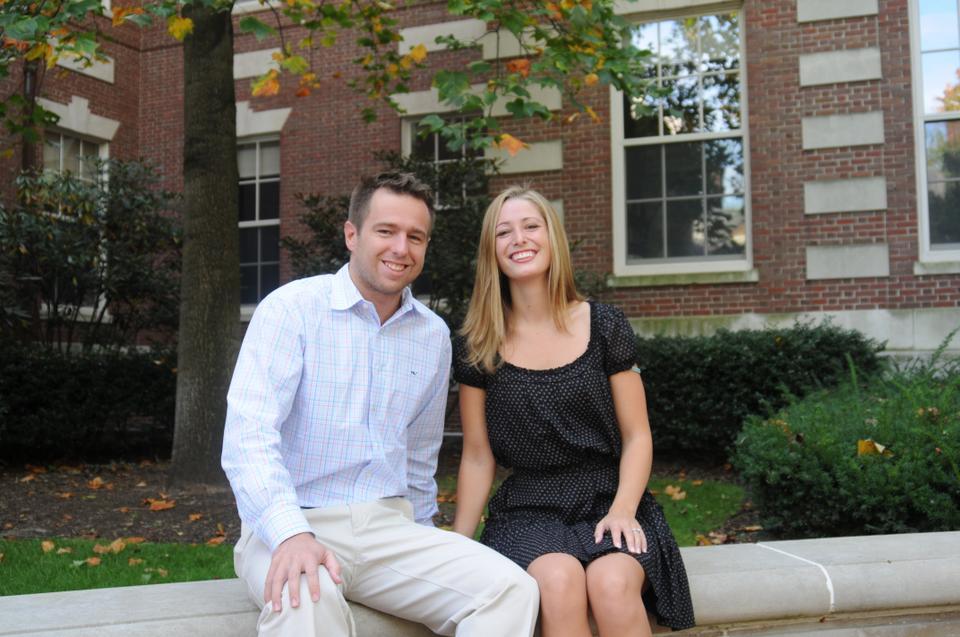 Romeo and Juliet, Theseus and Hippolyta, Portia and Bassanio—Ben and Katy Woodring can now be counted among the list of ...
By Vipul S. Shekhawat

Romeo and Juliet, Theseus and Hippolyta, Portia and Bassanio—Ben and Katy Woodring can now be counted among the list of couples united under Shakespeare’s auspices. Benjamin M. Woodring and Catherine L. Reedy are both teaching fellows for English 124d: “Shakespearean Tragedy,” taught by Professor Stephen J. Greenblatt. Last weekend, in Wilmette, Ill., the couple got married. “Magical, I think, is the best word,” said Woodring to describe the ceremony.

But the magic really started two years ago, a day after spring break in 2008. Woodring was told that he needed to give a tour of Harvard’s campus to a student just accepted into the graduate program in English. “I assumed it was just going to be another so-so, work-a-day tour,” he said.

After Reedy’s flight landed, she showed up at the Barker Center. “I’m sort of shy when I meet new people, so I just nervously waited outside the door, pacing back and forth for about an hour,” she said.

When Woodring finally emerged, she approached him and introduced herself. “I felt refreshed and comforted by her beauty,” Woodring said. “Within five minutes, it felt like we had known each other forever.” Woodring took Reedy out to lunch, a meal that quickly turned into a five-hour date, during which they “talked about everything.”

For these two, all this talk wasn’t much ado about nothing. The couple kept in touch all summer and started dating when Reedy arrived on campus in the fall.

“In the year before they got engaged, they probably spent more time together than a normal couple does in three or four years,” said Peter M. Wright, a friend of the couple. After their one-year courtship, Woodring and Reedy got engaged in November 2009, while on a trip to New York City to see “Turandot,” a marriage and love-themed opera. On that “misty, surreal” evening, Woodring popped the question.

When asked what role Shakespeare plays in their relationship, Woodring responded, “Shakespeare is almost universally emotionally resonating. His works are central to our relationship, and to how we understand each other and the world.”