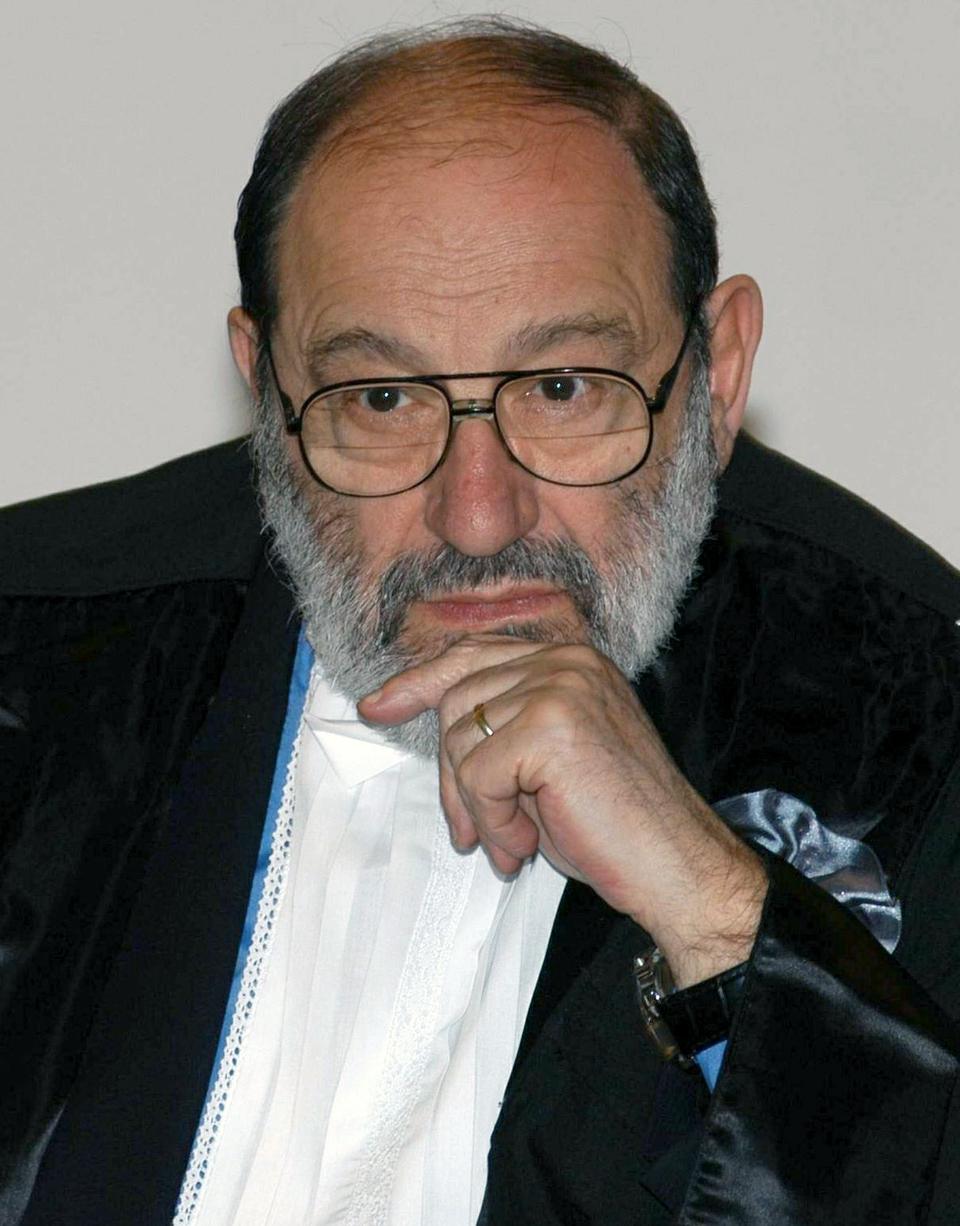 1. Fifteen Minutes:  You’re a semiologist. What does that mean?

Umberto Eco:  How many months do you give me to explain? Semiotics is a general theory of all existing languages ... all forms of communication—visual, tactile, and so on ... There is general semiotics which is a philosophical approach to this field, and then there are many specific semiotics.

UE:  I have been, with this time, 55 times in America. I feel pretty at home ... I was just looking, because in front of the big news-stand in Harvard Square there was a marvelous bar and restaurant that just disappeared, and it is back now. This happens in America. You come back one year later and a skyscraper has disappeared.

3. FM: You’ve traveled a lot. Do you have a favorite place?

UE: Many. But if I had to select a place to live in other than Italy, it would be New York or Paris. In fact I have a little flat in Paris. From Milan to Paris you can go on a plane in an hour and a half, so it’s easy to visit. For a long time, since my son worked in New York for12 years, I also had an apartment in New York.

4. FM: I read somewhere that your surname “Eco” is an acronym for “ex caelis oblatus,” or “given from the heavens.”

UE: I only discovered this maybe 10 years ago. My grandfather was a foundling, and the name to foundlings is given by an official of the city hall. Sometimes there were very sadistic officials who gave terrible names, but we had no way to know why this man had chosen “Eco,” until a friend of mine was studying in the Vatican Library and came across a list of acronyms made by the Jesuits. One of them was “ex caelis oblatus.” I think it is good. Better given by the heavens than by hell.

5. FM: What inspired you to write “The Prague Cemetery,” and what did you hope to accomplish with it?

UE: I always said that one of the main features of human languages is the possibility of lying. Dogs do not lie. When they bark to say that someone is outside, they tell the truth. Human beings lie continuously ... A particular form of lying is forgery ... like “The Protocols of the Elders of Zion,” which, if not the only cause, certainly contributed to the Holocaust. I find [“The Protocols”] interesting because, one, they are a completely self-contradictory text ... Second scandal, they were proven in 1921 to be false, and after that they were believed more and more, so it’s an interesting story. The fact that many beautiful and interesting historical essays were written on this topic is evidently not enough, because they have not reached the mass public audience. So, I don’t say it is the only motivation, but one of the motivations was that, maybe, transforming it into a narrative, I could reach more of an audience. I was just told yesterday that my book has been asked to be translated for Indonesia, a Muslim country. I don’t think Indonesians have gotten many opportunities to read the great scholarly books on “The Protocols”, which are reserved to a few scholars.

6. FM: How do you view the relationship between your scholarly output and your popular writing?

UE: I started by considering myself a scholar who worked six days a week and wrote novels on Sundays. And I thought at the beginning that there was no relationship between my novels and my academic work. Then, reading critics, they found connections ... There is a very important series in this country called the “Library of Living Philosophers” ... And since every human enterprise declines, I am the last [living philosopher] to be dealt with by the next volume. In this volume, every author must write a philosophical autobiography, and 25 people write 25 essays to which the author is supposed to answer. It is a terrible endeavor. Since it’s the “Library of Living Philosophers,” I hope to die before so it will not be published and I will not have to work so much. But I know that the editors of the collection have asked the writers to speak philosophically also of my novels ... It means, for certain persons, there is a strict relationship between the two of my activities.

7. FM: What can you do with a novel that you can’t do with an essay?

UE: When they ask me why I started to write the novel only at the age of 48 ... I don’t know why exactly I started. Probably I just had some wish to. But there were scholars who spent their whole lives wishing that they were novelists. Take the great Roland Barthes. A genius. He died with this sort of bitterness, not to have written what stupid people call “creative writing,” as if Plato and Aristotle were not writing creatively. In fact, Barthes was writing creatively his whole life. And in a way all of my essays have a sort of narrative structure. So, I always say that I’ve had a narrative impulse. I satisfied it in part by telling stories to my kids, but unfortunately they grew up.

8. FM: You once wrote a book about pop culture, in which you discussed apocalyptic and integrated intellectuals. Do you still think about that kind of binary?

UE: No, that was in 1964. Because at that time, there was, on one side, the going up of new popular mass-communication, television, and comic strips, considered low-brow, and on the other end the avant-garde movements. In some sense I already had a foot in the avant-garde, but at the same time, five years out of university ... I was also a passionate, even though critical, consumer of textual novels and comic books ... There is always a difference between the silent research and experiments of music and literature and what is produced for popular consumption, a difference between King and Franzen. But it is less important than before, and it would be silly to make such a straightforward separation.

9. FM: You have spoken about “open” and “closed” works of literature. Are your books open or closed?

UE: Starting this research, I got to the general conclusion that every work of art is open, because it elicits multiple interpretations ... But, for instance, a porno movie is very closed. It is meant to elicit a sexual reaction and then stop. You are not so free to muse on it. In this sense, someone said that I was one of the first to speak of the role played by the reader in the development of a work of art ... I always try to remember that when I spoke of “open work” the title had two aspects—the “open” and the “work”—so the work was there, and it could limit interpretations ... If you ask me if my books are open, I don’t know.

10. FM: But as a writer, don’t you think about how your books will be read?

UE: I’m joking when I say “I don’t know.” I have very well the impression that when I make certain allusions or use an ambiguous sentence I put the reader in the position of choosing among a series of interpretations, but I also know that in the course of my book I am eliminating the untenable interpretations.

11. FM: How has your approach to writing changed over your career?

UE: It’s very difficult to answer. One always has the impression to do the same thing. It is the job for somebody else to decide this. Or for myself in the next fifty years when I look backwards. I am too much inside still.

12. FM: Who would you cite as your important literary predecessors?

UE: If a writer confessed to have a unique predecessor, he would be an idiot. We have been shaped by a lot of influences. Certainly, because I have written a book on Joyce, Joyce has been an influence. But would I say my books depend on or follow Joyce? I don’t know. I don’t think so ...

13. FM: Who are some contemporary writers that you like to read?

UE: I should answer that since I’ve become a novelist I’ve stopped reading contemporary writers. One, not to become influenced. Second, because if they are writing more than me I cannot stand them, and if they are writing better than me I get very frustrated. So I read more and more 18th and 19th-century literature and many historical books. It happens that I read continuously contemporary writers but not systematically. For instance, I read the latest Jonathan Franzen; I am a devotee of Phillip Roth; I like Don DeLillo.

14. FM: If you had one message that you would wish to endure for your readers, what would it be?

UE: For my readers, they are my books. For the rest, I keep this [gesturing to phone] turned off because I don’t want to send messages or receive messages.

15. FM: What do you see next for yourself? What do you think about critically these days?

UE: Listen, in two months I will be 80. The most important things in my life these days are my two grandchildren, and I try to spend a lot of time with them. And all this preoccupation with the future does not concern me. I’ve had already enough.