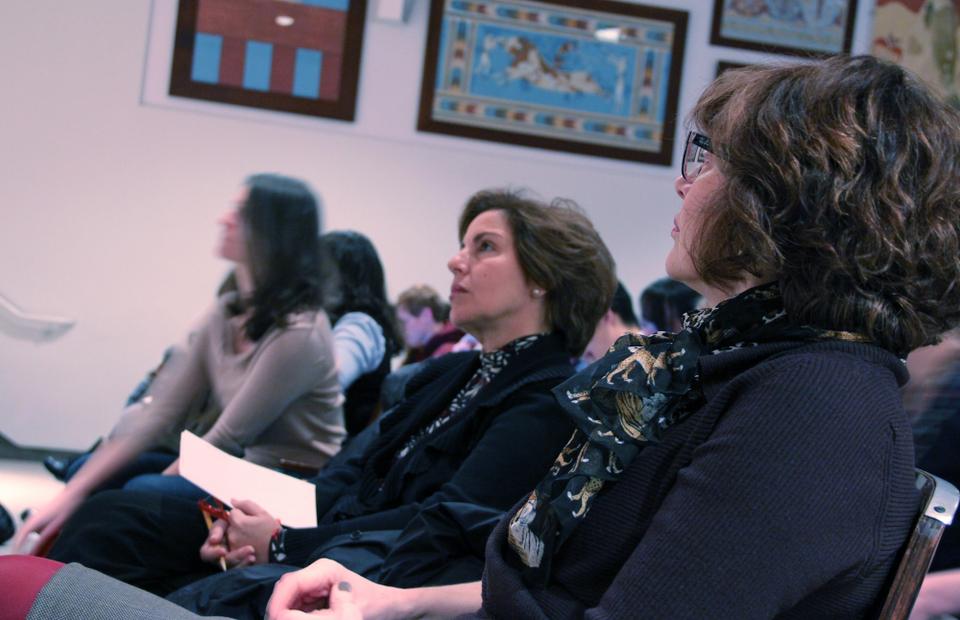 Some things on campus come in two’s: beds in a Lowell single, spring rolls at the Kong—and sometimes, professors. In ...
By Julia E. Kete

Some things on campus come in two’s: beds in a Lowell single, spring rolls at the Kong—and sometimes, professors. In team-taught classes, the two teachers form a unit; each provides something the other cannot. Professor A might describe team-teaching as thrilling; Professor B might argue that surely it’s more reflective. One thing is indisputable: at Harvard, students can find both disconcertingly large lectures and frighteningly small tutorials that are team-taught. Lecturer on History and Literature Patrick Pritchett explains that once students have settled into the sophomore tutorial he teaches with lecturer on Hist and Lit George H. Blaustein, the “idea of there being two teachers making it twice as hard just kind of evaporates.”

Disagreements between the two professors of team-taught classes are part of the reason for their appeal. According to Andrew J. Berry, co-lecturer of Organic and Evolutionary Biology 53 with Associate Professor Hopi E. Hoekstra, “We know our positions on various things and it becomes a point where we can predict how the other will react. It’s theater almost, adding a level of interaction between the professors which makes it more interesting and engages the students.”

Creative drama also exists in Hist and Lit sophomore tutorials. Two faculty members lead each tutorial: one is a historian and the other is a literary scholar. According to Blaustein, “Because it’s a seminar there is a built-in unpredictability and occasion for improvisation, which in my experience has always been positive. So if you are dealing with material that is traditionally ‘historical,’ it is the literary co-teacher who might offer the surprising perspective, or the provocative perspective. In some ways the collaboration is also a kind of mutual challenge.”

Professors vary in their approaches to team-teaching. Berry explains that in OEB 53, he and Hoekstra try to stay away from tag-teaching, where a professor comes to class only on the days he or she is giving the lecture. “That can be a recipe for disaster because people don’t know what the other person has taught and the style of teaching, maybe even the level of teaching is very inconsistent,” says Berry.

Julian Moll-Rocek ’12, who enjoyed the engaging dynamic between the professors of OEB 53, cautions that not all team-taught classes are created equal. “I have taken classes where it’s a different lecturer each time, and that can be a little bit hard to follow.”

Professors acknowledge that effective team-taught classes involve collaborative effort. Berry explains, “The idea is we are both present at every lecture and ideally we participate. Even if I’m not teaching I will definitely want to be there. I’m, if you like, a stooge in the audience. I think that sort of interactivity makes a lecture much more interesting.”

Professors also benefit from this interaction.“It’s mutually stimulating for the teachers. We can play off of each other in unexpected ways. It’s just kind of a win-win scenario,” says Pritchett. Students stand to benefit from learning the material from two experts rather than one. “From a pedagogical point of view I think it’s great that we can play to our strengths,” says Berry.

And yet when a professor opens his or her door to another expert, conflicts in opinion arise, and something has to give. “Whereas my vision of the universe is pretty concordant with Hopi’s, certainly we have disagreements about things, whether it’s just a matter of emphasis or a theoretical issue within the field ... that’s much more interesting and more intellectually honest,” says Berry. “In many ways I would say the major disadvantage of team-teaching is at the same time a major strength.”

ON THE UP SWING

Professors sing the praises of team-teaching, and students seem to agree. The number of students in OEB 53 has tripled since the class was modified to a team-taught class. “When we first started teaching [OEB 53] it was around 30. Since it’s been team-taught it’s grown to 90,” says Hoekstra.

During a Hist and Lit seminar, students learn to approach a text from both historical and literary standpoints. But ideally, “those kind of distinctions break down and we all become students of the process,” says Pritchett. In the end, the best team-taught classes are not watered-down versions of each expert’s background, but instead provide a strengthened level of discussion and argument. According to Blaustein, “One myth of the interdisciplinary endeavor is that there is a perfect harmonious overlap of disciplines. But in fact, one of the most productive aspects of team-teaching is, paradoxically, that you end up making the boundaries between disciplines clearer, even as you draw on them both.”