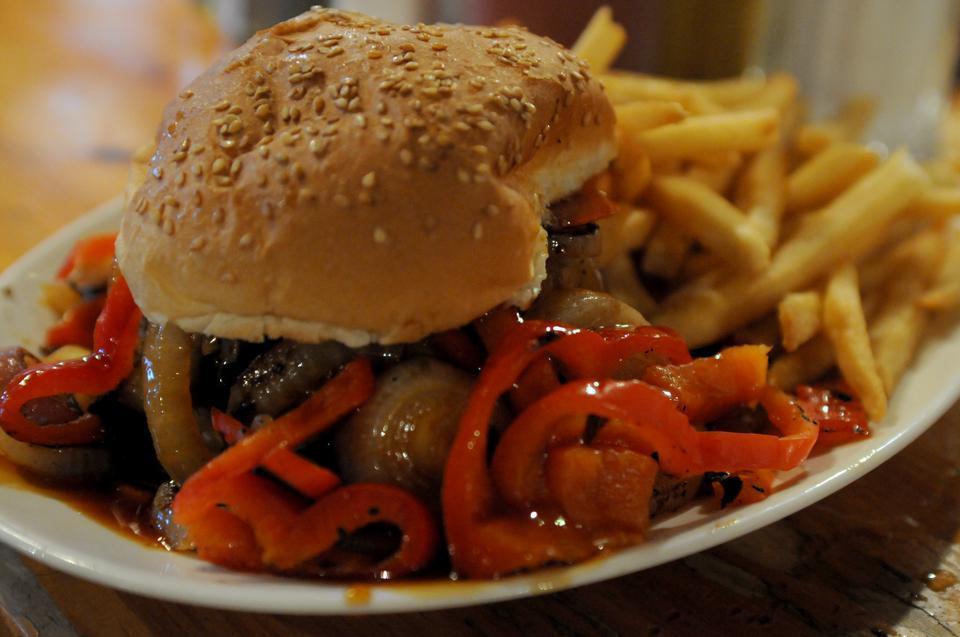 This burger's combination of grilled peppers, onions, mushrooms, and teriyaki sauce is sure to attract followers as fast as its namesake's Twitter account.
Advertisement
Advertisement

If you just can’t get enough of the Sheen Machine, then you’re in luck— because Harvard Square’s very own Mr. ...
By Grace Sun

If you just can’t get enough of the Sheen Machine, then you’re in luck— because Harvard Square’s very own Mr. Bartley’s Burgers just cooked up something that will make HUHDS food look like droopy-eyed, armless children: the Charlie Sheen Burger.

Packed with grilled peppers, onions, mushrooms, and topped with teriyaki sauce, this burger is probably more than anyone could survive. “It had more flavor than Charlie Sheen’s personality,” said Angie Peng ’14. “I’m in such a big food coma.”

First time Bartley’s patron Jennifer S. Wu ’14 agreed. “I like the sweet teriyaki sauce,” she said. “It went really well with the rest of the toppings.”

With fries that can’t be processed with a normal brain, this meal makes for a scrumptious, dare we say—winning—combination. So put on your total-bitchin’-rock-star-from-Mars pants, and gear up that tiger blood, because you’re about to have a dining experience straight out of Awesomeville.

“People have liked it and have been taking pictures of the sign outside,” said owner Billy Bartley. “We’re bringing joy to the community one burger at a time, just like Sheen got joy one hooker at a time. It comes with 20 ounces of coke … get it?”