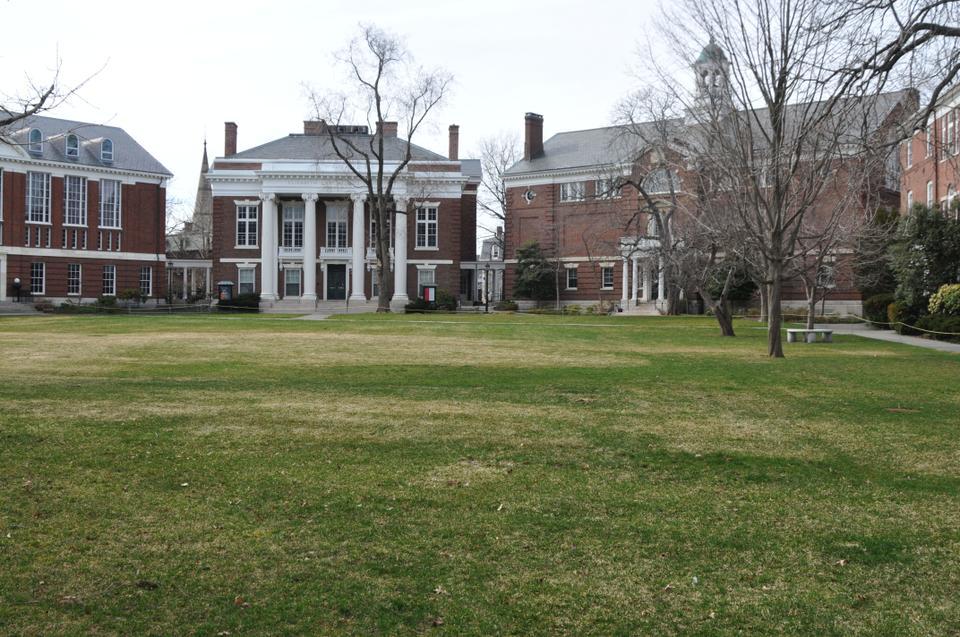 Sex and the Scholar

How women, gender and sex broke through Harvard's tall walls
By Courtney A. Fiske

Behind a buzzer-protected door in Pusey, steeped in that distinctive smell that attends all things old (part mothball, part mildew), lies the Harvard University Archives. Spit out your gum and submit to the security camera, and salacious tales of ritual sacrifice and tailored tweed await. Or something along those lines.

The actual documents—administrative records, financial statements, and reports from defunct commissions—prove more tepid than titillating. The 1950 Courses of Instruction reveal, for example, that Harvard men of yore read lots of Virgil, studied applied air power and epic novels, and endured the still lamented Ec10, then called Ec1. There was no talk of sex in the classroom, and there certainly were no women. Females featured only in the glossy spreads of the Radcliffe brochure, which promised four carefree years of green lawns, smiling peers, and quiet subordination.

When it comes to sex in scholarship, Women’s Studies made the first foray at Harvard, officially debuting in 1978 under the auspices of an eponymous committee. Susan R. Suleiman, veteran Professor of French and Comparative Literature, arrived three years later—the same year that Yale inaugurated its own Women’s Studies major. Appointed chair of Harvard’s still-nascent committee in 1983, Suleiman knew that the University had fallen behind the curve. Far from a directed curriculum, Women’s Studies amounted to a loose confederation of cross-listed classes, with no power to confer degrees come May. Run from a seldom-visited corner of the University Hall basement, the Committee lacked even its own phone number: the surest route to excommunication in a pre-email era.

Suleiman’s first initiative as chair? “A listing in the phonebook,” she quips. Next came collaboration with a dedicated group of female faculty, including Alice Jardine, Marjorie Garber, and the late Barbara Johnson. Their goal matched that of Harvard’s New Haven peer: establish Women’s Studies as a concentration unto itself, complete with sophomore tutorials and a thesis track. Heated strategy sessions and painstaking intellectual debates ensued—sometimes, Suleiman recalls, over such semantic minutia as the use of “an” or “the” in a sentence.

This attention to detail proved imperative to the Committee’s success. In the mid-1980s, “the women question” remained fraught at Harvard. Radcliffe, so long the locus for women’s issues on campus, had ceded day-to-day control over its female students in 1971. It now stood as an amorphous and increasingly ceremonial institution, variously analogized to a lame duck and a Potemkin village. Women had claimed the right to Lamont’s prefab cubicles in 1967, to graduation ceremonies in Tercentenary Theatre in 1970, and to Yard and River dorms in 1972. Yet, as Harvard’s experiment in co-education entered its fifth decade, women comprised less than 7 percent of the tenured faculty and gender quotas persisted: for every 2.5 males, only one female could gain admission. “Tense” and “troubled” were euphemisms when applied to the Harvard-Radcliffe tête-à-tête, which historians Morton and Phyllis Keller equated to “the mating dance of two exotic, undersexed birds.” Interpret that as you will.

Aware of these internal politics, Suleiman and her colleagues were careful to separate Women’s Studies from the uncertainties of Radcliffe—“this,” Suleiman emphasized, “was a Harvard proposal.” Modeled after the extant Committees on Degrees in History and Literature and Social Studies, Women’s Studies strove to stake its rightful place within Harvard’s institutional structure.

In the fall of 1986, the soon-to-be concentration faced its final hurdle: approval by the Faculty at their November meeting. “From September to late October, our office was like a campaign headquarters. We were asking ourselves ‘How do we get the vote out?’” Suleiman remembers. Personally addressed letters to each member of the Faculty did the trick. The packed room voted unanimously in favor of the new concentration, with one dissenter: Harvey C. Mansfield, Professor of Government and conservative extraordinaire.

In 1987, alphabetically relegated to the course catalog’s final pages, the Committee of Degrees in Women’s Studies made its inaugural appearance. Two introductory survey courses—“The Roots of Feminism” and “Current Problems in Feminist Theory”—preceded seminar offerings and over 60 cross-listed classes. Psychology 1810 probed the subconscious dimensions of marriage and motherhood, while French 136 promised to make sense of modern French feminism’s notoriously Delphic pronouncements. Belatedly, feminism had found secure footing at Harvard.

"Women’s Studies" as such has since fallen out of academic vogue. Now more or less an intellectual anachronism, its feminist-specific curriculum has been resorbed by broader scholarly concerns: a shift that the Committee’s 2003 recoining as Women, Gender, and Sexuality Studies (WGS) reflects. Diffused by the ostensible success of the second-wave, the energy of 1970s feminist scholarship has funneled into queer theory. Sexuality, it seems, has displaced feminism as a foremost frame of critical inquiry for up-and-coming academics.

In the lecture hall, gender often now seems more taken-for-granted than avant-garde. “Twenty years ago, discussing gender in the classroom was seen as a transgressive act. Now, in this millennium, we’ve reached a critical turning point where it seems strange if a course in the humanities or social sciences fails to address these issues,” Caroline Light, Director of Studies at WGS, explained. Speaking of the department’s recent name change, Light comments, “Students sometimes ask me what the ‘W’ is still doing there.” This, despite the integral presence of women as writers, theorists, and subjects of inquiry within the WGS curriculum.

Gender’s widespread diffusion within the academy has undoubtedly changed scholarship for the better. The side effect of its embrace, however, is a certain complacency. “There’s been a way in which everyone is okay with hearing the basic ideas of feminism. Like, ‘we get it already, gender is a construct,’” Julie Orlemanski, a fellow at the Humanities Center, observed. “The risk is that gender becomes an issue merely of academic interest, that it becomes wholly depoliticized.” It’s the age-old question of the relation between theory and practice: what meanings do musings about gender have if confined to students’ psyches? What use are ideas like “feminism” and “sexual liberation” if they are purely pedantic—if they fail to affect real change in some real person’s life?

Less theoretically perplexing, but no less pressing, is the scant enrollment of men in courses that betray anything to do with W, G, or S. “Put gender and sexuality in the title, and you’ll get 90 percent women,” Orlemanski laments. “Most men still don’t feel it incumbent upon themselves to explore these issues in the classroom.”

Whether of the academic or activist sort, feminism’s mission is far from moot. On this, University Professor Laurel Thatcher Ulrich, a veritable feminist icon, agrees. Her 2004 compilation of essays, “Yards and Gates,” came as an attempt to counter what she perceived as the pervasive invisibility of women at Harvard—in its dominant narratives, its popular mythologies, even its portrait collection. “Students sometimes think that there is history and then there is women’s history,” Ulrich disclosed. “But if the history is all about men, they think of it as history. And if there is history that is 50 percent about women, it is seen as something special and separate.”

“It’s not feminist just to talk about women,” Sarah S. Richardson, Assistant Professor of WGS and the History of Science, added. “You can’t just say to a professor, ‘Include gender.’ There needs to be an acquaintance with the feminist intellectual tradition, with feminism as an alternative way of approaching knowledge.” Confining women to a single day on a syllabus, she insists, is not a solution.

To insiders and “Social Network” skeptics, Harvard seems more ascetic than sexually indulgent. Here, the hypothetical orgies of Sorkin lore give way to social awkwardness, sexual tension, and aleatory outbursts of nudity. Any witness to Primal Scream can attest that sprinters in the nude are distinctly unarousing. Yet, as would be expected for a group of 6,000-odd 20-somethings, how much (or how little) sex happens on-campus remains a topic of perpetual interest. For Charlie Sheen sympathizers, the data is unpromising: in its spring 2010 survey, OSAPR pegged the percentage of students who entertained zero sexual partners in the past year at 42 percent.

Such statistics, however, fail to tell the whole story. For some undergraduates, sex is not simply a tally of thwarted hookups, as it likely has been for all of time; now it is also a topic ripe for intellectual inquiry.

As Daniel M. Claridge ’13, who had to disrobe himself to capture some of the shots, admits, “of course it was awkward. But, after a while, you become desensitized to the fact that you are nude. It would have almost been stranger to have been clothed in that environment.” While the film does not explicitly interrogate issues of sexual identity, the line between nudism and sexuality was often blurred. Still, in Claridge’s opinion, “the most powerful moments in the film are those where these nudists are clothed. It really makes you realize the power that clothing has.” All in all, Claridge notes, “it’s been a fascinating journey. Now in class we watch an hour or two of penis footage, and it doesn’t really faze anyone.”