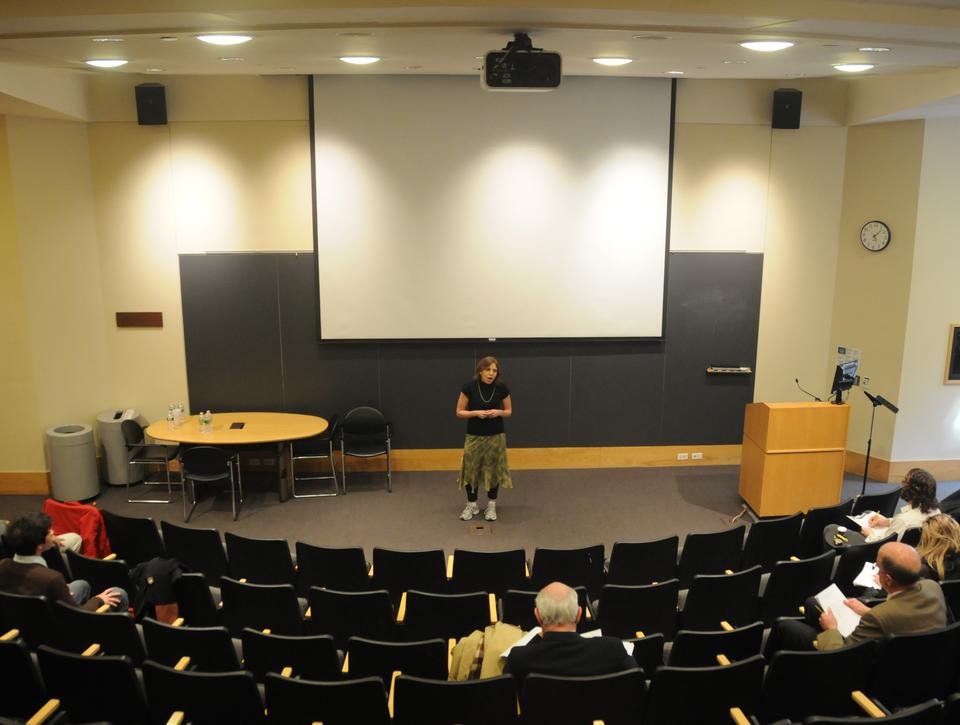 Excerpts from Keats, Tennyson, and Woolf lingered in the air of Boylston Hall’s Fong Auditorium last Tuesday, as a dozen ...
By Victoria A. Baena

Excerpts from Keats, Tennyson, and Woolf lingered in the air of Boylston Hall’s Fong Auditorium last Tuesday, as a dozen students took part in the English Department’s annual Boylston Prize Competition for Elocution. A boy faltered over the final passage of “The Great Gatsby.” Some paced the room, wracked by their readings, and others stood stock still. While they were placing themselves in a tradition nearly two centuries old, a renewed emphasis on public speaking throughout and beyond Harvard is beginning to lend the contest distinctly modern implications.

Increasingly, the University is stressing the value of public speaking through courses such as Expos 40: A Public Speaking Practicum, as well as initiatives like the Program in Speaking and Learning at the Derek Bok Center. These programs are celebrated as innovative for their incorporation of rhetorical strategies into courses, a skill absent in most Harvard classes. Indeed, the elocution competition is a remnant of a time when elocution was an essential part of a Harvard curriculum—and a reminder that, like most trends, this one is nothing new.

Oratorical skill was part of a Harvard education from the start, with all professors incorporating rhetoric, elocution, and English composition into their courses throughout the 18th century. In 1771, Nicholas Boylston bequeathed 1500 pounds to the University to formally establish a professorship of speaking and oratory. The professor was to “instruct the students of the several classes in the nature, excellence, and acquisition of the important Art of Rhetoric ... or in the theory and practice of writing and speaking well.”

The looming war against England prevented the fulfillment of Boylston’s bequest—at least until the turn of the century, when his nephew, W. Nicholas Boylston, threatened to take legal action against the Harvard Corporation. The trustees suddenly found it easier to appoint the nation’s first professor of rhetoric and oratory, giving the job to John Quincy Adams. In gratitude, the younger Boylston established a fund of $1000 to be awarded as prizes in elocution and to “promote the reputation of Harvard College.”

While the elocution competition has continued up to the present, the scope of the Boylston Professor of Rhetoric and Oratory gradually broadened to include any scholars particularly renowned in the arts and letters. By the middle of the 20th century, poetic recitation had begun to fall out of favor, according to W. James Simpson, Professor of English and English department chair. In fact, the last two professors holding the title—Seamus Heaney and Jorie Graham—were chosen primarily for their accomplishments as renowned poets rather than for their oratorical achievements.

Graham did, however, do her part in reuniting the Boylston professorship and prize through her position as one of the judges for this year’s elocution competition. Joining her were Simpson and Michael Shinagel, dean of continuing education and senior lecturer on English.

“It’s pleasurable to listen to a text instead of reading it in silence,” says Simpson, explaining what he sees as the continued importance and relevance of recitation today. “It resonates with you.”

Students can choose to memorize and recite any selection from Greek, Latin, or English literature of up to five minutes in length. Some, such as Oliver D. Strand ’11, were drawn to the rich history of elocution at Harvard in electing which piece to perform.

Strand recited “Over 2,000 Illustrations and a Complete Concordance,” by Elizabeth Bishop. “I heard a story that John Ashbery [’49, a Pulitzer Prize-winning poet] read this poem and in the middle of the reading of it burst into tears,” he says. “I wanted to see if I could understand why.”

Strand was one of about half of the participants to refrain from “performing” the piece, focusing on the words and phrases instead of acting out the excerpt. “A lot of the poem’s activity seems to be in your imagination,” he explains. “A lot of it has to do with the rhythms of the piece, all the images associated with them ... I didn’t want to add much on top of that.”

Others, such as Joshua G. Wilson ’13, brought a dramatic focus to their recitations. Wilson chose to recite “Ulysses” by Alfred Tennyson. “More so than my other favorite poems,” he says, “it’s written as though it’s to be spoken.”

To him, this lends itself naturally to a theatrically infused performance. “Our knowledge of who the speaker is should inform how we inflect certain phrases, where we place emphasis,” he states. “The character Ulysses should dramatically inform the performance of an otherwise non-dramatic speech.”

Elise R. Morrison, preceptor for Expos 40 and associate director for speaking instruction at the Derek Bok Center, stresses that while good public speaking is and can be tied to dramatic experience, its significance is much broader. “People across the board are seeing the value of giving students practice and careful feedback on how they present themselves,” she says.

Expos 40: Public Speaking Practicum was established three years ago as an effort to create a single course fully devoted to rhetorical skill. “A lot of people were saying, yes there’s a need for public speaking at Harvard, but finding a place to house it was the trick,” says Morrison. She believes the decision to house the class under the Expository Writing program has been effective. In fact, there were 120 applicants for 12 spaces this year—prompting the program leaders to plan to double the sections offered next year.

This surge in interest is part of a larger movement throughout the University in once again recognizing the value of public speaking. Last year rhetoric expert David Zarefsky of Northwestern University was a visiting professor in the English Department. Through Bok Center initiatives, faculty can find ways to incorporate oral communication into courses that are not as focused on public speaking as Expos 40.

“My suspicion is that [this attitude] has changed a bit because of the increase in rhetorical structures that we encounter all the time,” states Morrison. “We’re expressing ourselves in a whole lot of different modalities.”

From Facebook and Twitter to podcasts and YouTube videos, it has never been easier to say something—and be heard—in such a public way. Yet in order to remain effective, stresses Morrison, this upsurge in quantity cannot come at the expense of polish and quality. “The choices we make with our physical and vocal performances,” she says, “lend a lot or detract a lot from our message.”

The groundswell of interest in Expos 40 reflects students’ increasing awareness of the contemporary significance of rhetorical skill, whether at Harvard or after. “More job-related outlets ... are somehow legitimating this thing that is in fact a really old form of expression,” notes Morrison, highlighting the history behind the discipline.

Simpson agrees that the art of elocution should be part of a Harvard education. The recent overhaul of the English Department curriculum did not include a greater emphasis on speaking; however, states Simpson, “I hope that in the years to come this will become a greater priority.”

Ultimately, Simpson returns to purely aesthetic benefits in describing the significance of rhetorical speech—especially the type of memorized recitation that the competition last week called for. “It’s something you can’t take away,” he says. “It becomes part of the ballast of your soul.”