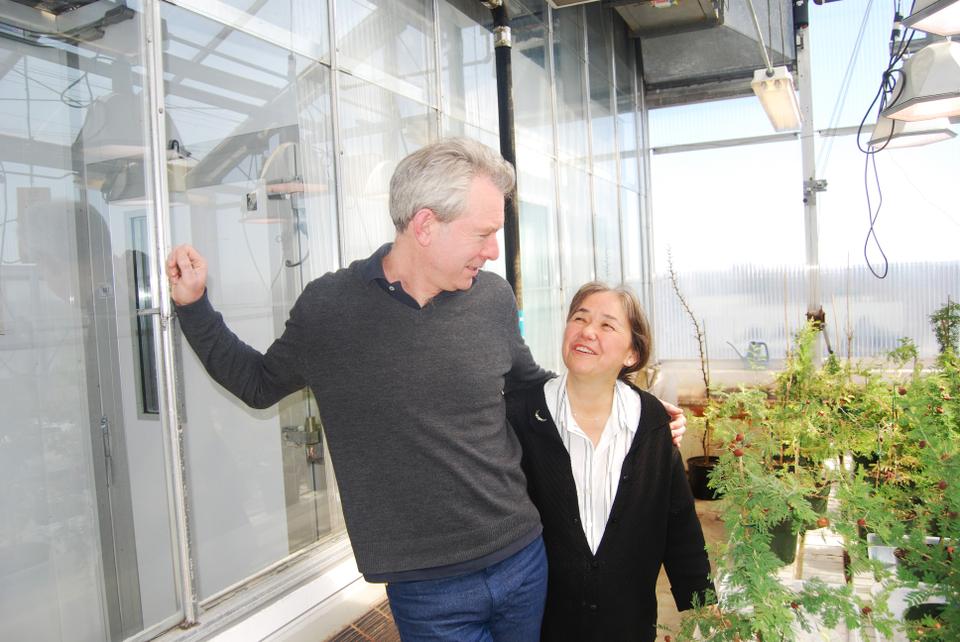 I’m giving my life story to the Crimson. No, I’m actually talking about my relationship with my wife, which is more or less my life story because I can’t remember anything before that.
By Claire M. McLaughlin

I’m giving my life story to the Crimson. No, I’m actually talking about my relationship with my wife, which is more or less my life story because I can’t remember anything before that.

She was, at that stage, doing a lot of fieldwork in Australia. She always needs cheap labor—free labor, basically. One of the groups of insects she works on is ants. Often what she wants is an ant colony.

Now an ant colony is not an easy thing to get. To get the colony, you need to get the queen. With the species we were working with in Australia, those were often a meter or two down in the topsoil and very heavily defended. That basically is a lot of spadework. She would sit there, eagle-eyed, waiting for the queen, but I’m the one in the tropical sun [doing the spading]. So that was the first trip we did.

We flew to Australia for four or five months. I was there as the ant dirt shoveling guy—that was my function. I guess it was during that trip, you would say, that we started dating.I’m inert in terms of a domestic vision.

Before we had kids, we lived in a small kind of townhouse-y house. Which was great. Lovely house. Great neighborhood. I loved it. Then we had kids. She decided—and I kicked and screamed—that we needed a bigger house, that we should move. She bought this house that we currently live in. It was in a state of dilapidation. I called it “The Dump,” and I was incredibly unhelpful. And she restored it; and it’s a fantastic place.

The other thing, and it’s annoyingly domestic, but it’s important: She loves to cook, and she’s really good at it. So she’ll come back from a full day at work and cook up a great meal, often incredibly fast and efficiently.

This is very sweet, actually: She learned to cook some of my favorite English dishes, so she cooks a fantastic Shepherd’s pie.I think it’s a fairly standard parenting shtick. We do a slightly good cop, bad cop routine. The kids are now smart enough to know if they want something, they go and ask mum.

I would definitely say she’s more “mommish” than I would have predicted. She really likes to do mom-like things. You know, she was a woman making it in a scientific world. She was one of the first women tenured at Harvard in biology. So she was very much a career woman.

Eighteen months ago, I was knocked off my bicycle and woke up in the hospital. I was fairly badly beaten up. So I called Naomi and said, “Don’t come.” But she came immediately. Basically they had to reattach a large part of my ear, and she was fantastic. She was great, because she was actually fascinated by what they were doing. And [the doctors] were all expecting, this is a wife, she’s going to be fainting and so on. But she was being so cool about it.

We met on an elevator. I got on the elevator in the basement of the zoology building at Oxford. It stopped on the first floor, and this guy got on and I thought nothing of it. I got off on the second floor, and as I walked out of the elevator, this guy who had gotten on said, “Next time, why don’t you take the stairs?” And I turned around and looked at this guy and thought, “What a jerk!” Then that afternoon I was in a friend’s office, and she turned to me and said, “Have you met Andrew Berry?”

We were just friends. We were in India [en route to our first trip to Australia], and I got sick. There’s an Indian drink called Limca, and he appeared at my doorway holding these two bottles after I’d been deliriously sick for almost a day, and having not really had any interest in this guy, I looked up and saw him standing in the doorway. I don’t think I’d ever seen anything quite so good in my whole life. So I certainly noticed him at that point.

We really got married for the green card. I guess we’re of a generation where we might have just lived together, but it became an issue with the green card. It was literally a decision taken almost overnight. We got married in an office of a justice of the peace located over a laundromat in East Cambridge. It was a civil ceremony carried out by this very nice fellow, and I remember he left the phone off the hook during the actual ceremony, so it started beeping very loudly…. So no, it wasn’t a traditional wedding.

He’s a wonderful father. He’s kind of the cool parent. He takes the girls on hikes pretty much every Sunday. In the summertime we always go to Colorado, and they’ve been busy “collecting peaks.” So Andrew takes them on the hikes up the mountaintops.Andrew will often teasingly say things that are rude and outrageous—there’s nothing he likes more than to be rude and outrageous in some way.

He says things that just sound terrible. He’ll say to people, “I can’t see any reason at all why people should have children. It takes up too much energy, it’s a waste of time.” But what he actually does is be a fantastic father.

My sister passed away a few years ago, and he was fantastic through all of that. She died of ALS, so she was in a wheelchair for the last year of her life. I remember he took her to a place no nurse would ever try—up on the side of a cliff in a wheelchair overlooking the ocean. And we just had a great day, and she loved it. He just makes everything seem fun.