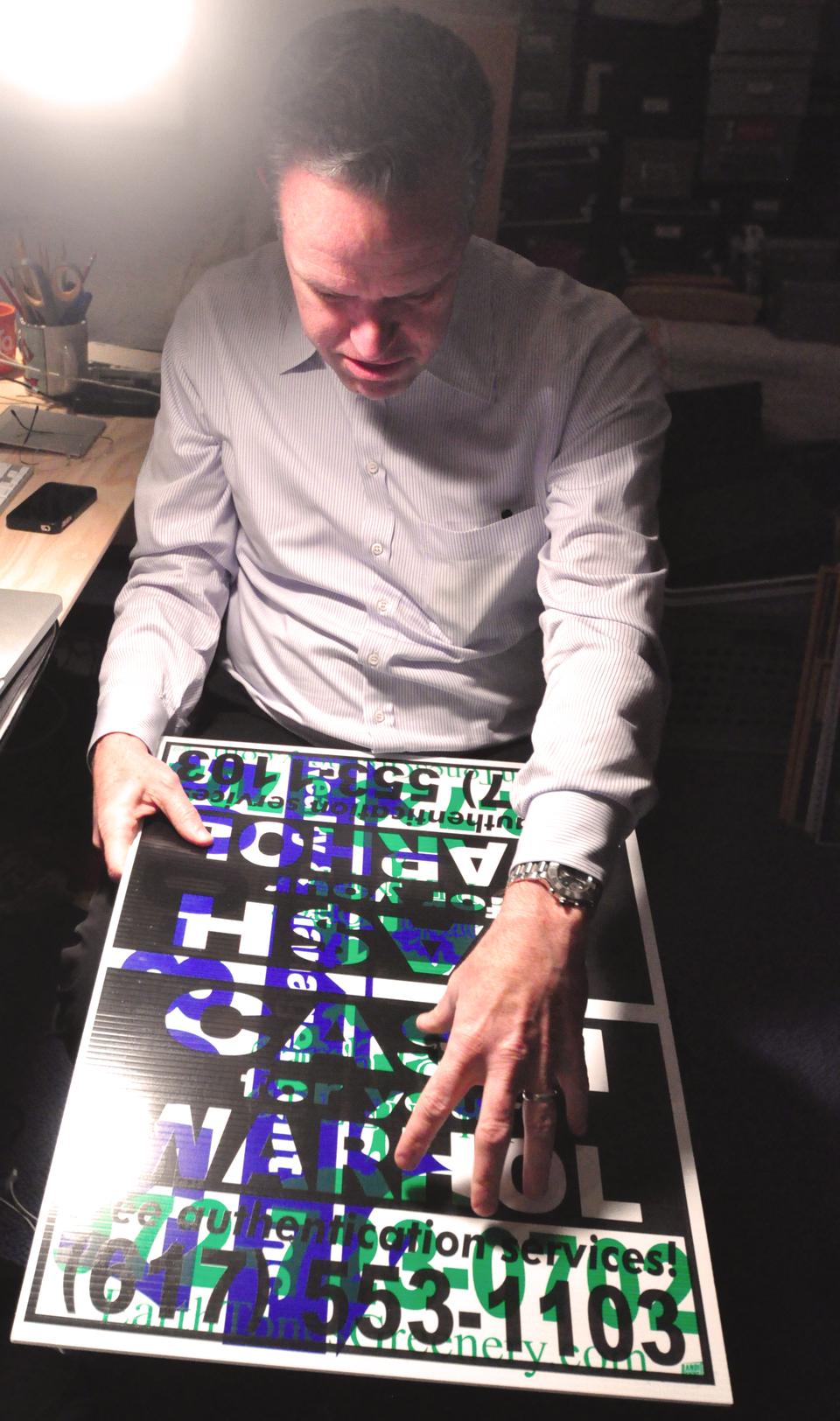 Geoff L. Hargadon ’76 holds a test print of one of the “Cash For Your Warhol” signs in his Somerville studio.
Advertisement
Advertisement

CA$H for your HARGADON

Hargadon’s art is about provocation, not gratification. “I think art that tries to please all people ends up failing,” he says. “Some of them probably think it’s ridiculous, what I do, and that’s okay.”
By Marina Molarsky-Beck

The signs started appearing in 2009, at the height of the recession: Bright blue letters on yellow corrugated plastic, nearly indistinguishable from the thousands of others offering liquidity solutions to the desperate. They were stapled to telephone poles and planted upright in lawns. But these signs weren’t soliciting the sale of junk cars or forclosed homes. Instead, they offered “CA$H for your WARHOL.”

At first, the 617 phone number listed as a “24-hr message service” was just a cell phone number belonging to Geoff L. Hargadon ’76. When calls started pouring in, however, Hargadon began using a Google Voice account to record the messages.

Responses ranged from the apparently sincere (“I don’t have a Warhol, but I have…a [Alexander] Calder and a Peter Alexander I want to get rid of”) to the outraged (“You’re vandalizing the Back Bay…. You don’t really want my Warhols! Do you really want my Warhols?”). One caller even dubbed Hargadon’s work “The best propaganda I’ve seen in years.” Another left a message describing the three “beautiful” warthogs he had for sale, including one with an eye problem. The Philadelphia Police called to complain about the placement of a sign. Some of the calls even came from art galleries and “people who should know better,” in Hargadon’s words.

The posters, however, were intended as a joke. “I thought it would be a good send up to the one percent. At that point in the financial crisis, everybody was in it, and even people who had Warhols were looking for bailout money,” says Hargadon.

Hargadon was surprised, however, by the immediate and overwhelming reactions to his signs. “I thought it would be sort of an obvious prank,” he says. “But it was amazing how many people would call me offering Warhols.” Some people even sent in photographs, using an online form on the project’s website, of Warhols of varying quality and authenticity: cheap posters, unsigned multiples, and even a painting that Hargadon estimates to be worth $500,000.

Today, Hargadon has compiled over 2,000 phone responses to his signs into a digital archive. He plays them from a widescreen iMac in the lofted studio space he calls “the laboratory” on the top floor of his Somerville home. Hargadon, who works in wealth management, calls art his “jeans-and-sneakers avocation.” When he shows me around his studio, however, he is wearing an immaculate button-up shirt, slacks, and shiny leather Oxfords.

Hargadon is tall and thin, with neatly cropped grey hair and blue eyes. At Harvard, he was an economics concentrator and lived in Kirkland House. Art “wasn’t even on the radar screen” for him in college, he says. Around 20 years ago, though, he had a “eureka moment” at an exhibition of work by Minimalist master Sol LeWitt. Hargadon subsequently fell in love with street art, and began collecting work by artists like PIXNIT, Swoon, Bäst, and the Brooklyn-based duo FAILE.

In 2005, Hargadon caught the attention of the art world with a parody of Christo and Jeanne-Claude’s “The Gates,” a temporary installation of bright orange nylon arches that lined the pathways of New York’s Central Park in winter 2005. Hargadon’s “The Somerville Gates” was a miniaturized version that snaked through the doorways of his home and past his cat, Edie. “The Somerville Gates,” which was originally promoted solely via email to 30 friends, went viral and wound up three days later on the front page of The New York Times Arts Section.

Hargadon’s work, from doll-sized gates to Warholian sale signs, always picks fun at the overlap of art and commerce. The “Ca$h For Your Warhol” signs themselves, most of which are manufactured by Bandit Signs in Oklahoma, now sell for up to nearly $1,000. “I’m not really a skilled artist,” Hargadon readily admits. “I’m more of a conceptual artist—which sounds really pretentious, but I mean it literally: I’m dealing with concepts.” He continues, “I’m kind of relying on the skills of other people, but that’s okay because everyone’s doing that these days.”

Hargadon’s project caught the attention of other artists, like Jenny Holzer, whose conceptual work also deals heavily with text, and Shepard Fairey, best known for his iconic tri-tone Obama poster, whom Hargadon considers a friend. The Andy Warhol Foundation for the Visual Arts, an organization that promotes the arts in accordance with Warhol’s will, even commissioned a set of signs for its board members—photographer Cindy Sherman was among them.

But Hargadon pays close attention not only to his admirers but also to his critics. One street artist, Hargadon remembers, called him a “yuppie rich boy douchebag.” Hargadon’s response? “I may be a yuppie, and I may be a douchebag, but I’m definitely not rich,” he says, laughing.

In general, though, Hargadon says he gets along with street artists, despite differences in artistic project and public persona. “I visit with them, and I have good friendships with a lot of them and I think there’s mutual respect,” Hargadon explains.

Hargadon’s art is about provocation, not gratification. “I think art that tries to please all people ends up failing,” he says. “Some of them probably think it’s ridiculous, what I do, and that’s okay.”