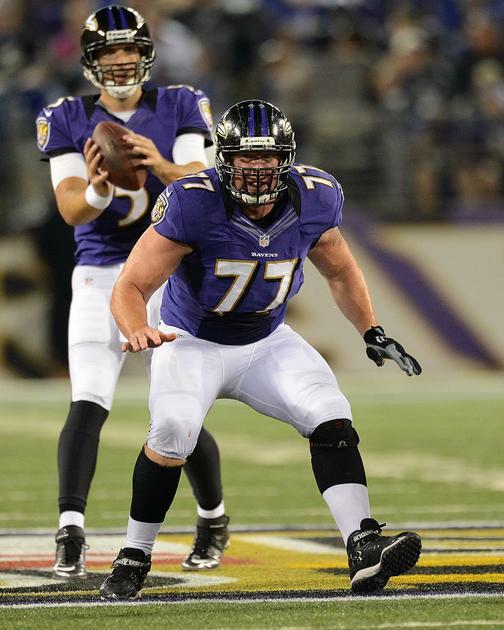 Matt R. Birk ’98 was the starting center for the Super Bowl XLVII Champion Baltimore Ravens. The Harvard graduate and economics concentrator has received multiple athletic honors. He was an All-Ivy League player at Harvard, a two-time NFL All-Pro and six-time Pro Bowler, and recipient of the Ed Block Courage Award and Walter Payton Man of the Year Award. FM spoke with Birk about his success on and off the field shortly after he won his first Super Bowl in New Orleans this past February.
By William H Marks

Matt R. Birk ’98 was the starting center for the Super Bowl XLVII Champion Baltimore Ravens. The Harvard graduate, who concentrated in economics, was drafted by the Minnesota Vikings in the sixth round of the 1998 NFL Draft and signed with the Ravens in 2009. From St. Paul, Minn., Birk has received multiple athletic honors. He was an All-Ivy League player at Harvard, a two-time NFL All-Pro and six-time Pro Bowler, and recipient of the Ed Block Courage Award and Walter Payton Man of the Year Award. FM spoke with Birk about his success on and off the field shortly after winning his first Super Bowl in New Orleans this past February.

Matt Birk: I was so fortunate to have attended Harvard. Obviously one it’s a great school, but it was a great fit for me because it was a great mix of academics and athletics. I’m thankful I wasn’t good enough to, and didn’t, go to a big time Division I college football program, because I don’t think I would’ve done real well there. It’s a different culture—most of my teammates went to those schools, and it sounds like so much of the focus is on football. At Harvard it’s just a great balance. I could take school very seriously, but also got to focus a lot of my energy on football. That balance was key for me.

FM: You’ve done a lot in terms of brain injury related work. Will all the recent research on that affect how you reflect on your time in the NFL and on playing football?

MB: No I don’t think so. I’m very glad that we’re having this conversation now because ultimately that’s going to lead to our game being safer. It’s obviously unfortunate, but it’s just part of the game, and this issue is now finally getting a lot of attention from a lot of different angles. I’m very thankful to have the opportunity to play football and make a living doing it, and for me to be involved, whether it’s donating my brain or trying to be an advocate for player safety. I just wanted to make the game safer so the hundreds of thousands of kids who play this game are able to enjoy it in the safest way possible. Because I think it’s a great game—it teaches young people so much about life and what it takes to be successful.

FM: Have you had a chance to talk with Chris Nowinski ’00 about his work on concussions?

MB: I’m in contact with Chris all the time, doing some stuff with him, trying to raise awareness and trying to help expedite changes to the game and ultimately make the experience safer.

FM: When you were at Harvard, did you ever expect to find yourself playing in the Super Bowl 15 years later?

MB: No, I didn’t choose Harvard because I thought it was the fast track to the NFL. I never thought I’d be at Harvard either, but you never know how life is going to turn out. I’m certain as I look back—I’m very grateful for the past and the journey I’ve been able to take.

FM: Has all the recent research had an affect on your opinion of the net benefit of college football and other sports compared to the NFL? Do you feel like it’s a game that should be played at all levels and should certain precautions be taken at certain levels?

MB: On the professional level, we have the leverage, we have a voice, and we’ve made some changes to our game and to our practice routine that hopefully ultimately will filter down to the lower levels where the athletes don’t have much of a voice. I think that’s our responsibility and one that we need to accept and realize. It’s a lot bigger than just us and our careers and our teams. You’re in the NFL, everybody is watching. There’s definitely a responsibility that goes along with that.