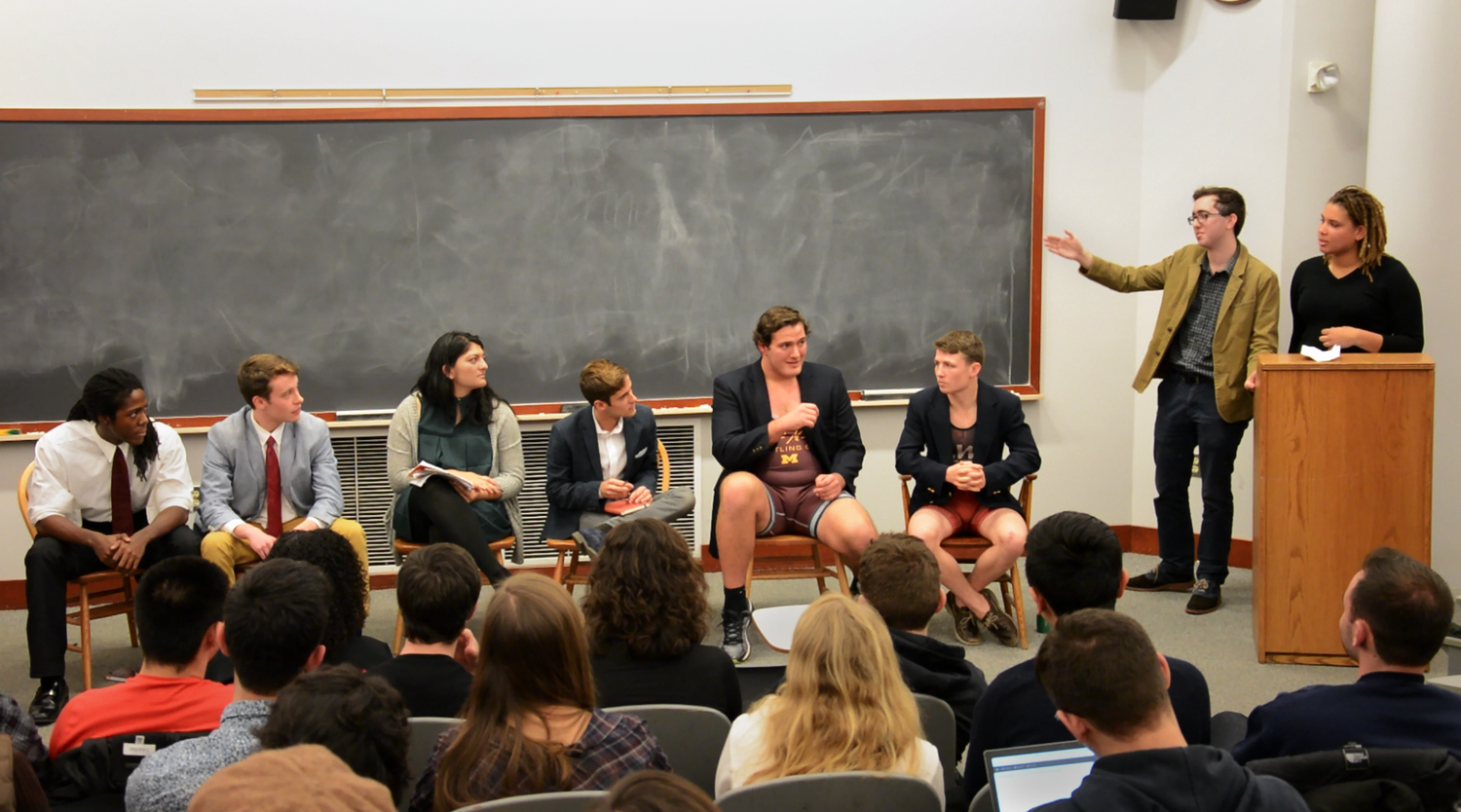 At a lively debate on Saturday night, the three tickets competing to lead the Undergraduate Council all said Harvard should recognize single-sex organizations and agreed that the University should not ban students from joining male final clubs.

Final clubs and the College’s social spaces have come under increased scrutiny from both students and administrators this fall, and much of Saturday’s debate, co-hosted by The Crimson and dubbed the “UC-Crimson Crossfire,” focused on the candidates’ perspectives on the College’s current social climate and their proposals for making the social scene more inclusive.

When asked how they would have voted on a proposed UC referendum that did not make the ballot but would have called on administrators to restrict student membership in final clubs, all candidates said they oppose such a move.

“The University spends too much of its time pressuring off-campus entities for their shortcomings,” said Nick E. Gajdzik ’16-’17, a presidential contender. “Right now, the University is scapegoating the final clubs because they have been inept. They have robbed you, as students, of the opportunity of going out on Friday and Saturday nights and enjoying your Harvard experience to the fullest.”

All the candidates also said they support the University recognizing single-sex social groups on campus. Presidential candidate Shaiba Rather ’17, the only female candidate on stage in front of the packed Harvard Hall classroom, said women need spaces where they feel empowered in a male-dominated world.

William F. Morris ’17, a vice presidential candidate who is also a member of the fraternity Sigma Chi, argued that Harvard should stop treating single-sex organizations as “the root of all evil on campus.”

Candidates generally agreed that it was important to encourage students to take advantage of currently underused spaces for social events, and they criticized the high rent fees for event rooms in the upperclassman Houses.

“What I think is that we’re overlooking the obvious, that there exist spaces that we’re not currently using,” said William A. Greenlaw ’17, who is running for UC president. “If they really believe that social life should be centered on the Houses, then open up these spaces for student organizations.”

“It’s about making the social spaces on campus actually accessible to students,” Banks said. “We’d like to repurpose the $30,000 we have on the Undergraduate Council to build social events for students.”

Rather proposed creating a bystander intervention program to prevent sexual assault, citing the survey statistic that reported 80 percent of Harvard students had “witnessed a drunk person heading for a sexual encounter” and did not intervene.

Greenlaw proposed using the UC grant process to reward student groups that have been proactive about seeking training and resources for sexual assault prevention.

All three teams disparaged the General Education program, which a faculty committee last spring deemed “failing on a variety of fronts” and faces overhaul. Morris and Banks both called the program a “failure.”

Gajdzik said it was overly “bureaucratic.” “We need to get administrators out of the classrooms and let the professors do their darn jobs,” he said. 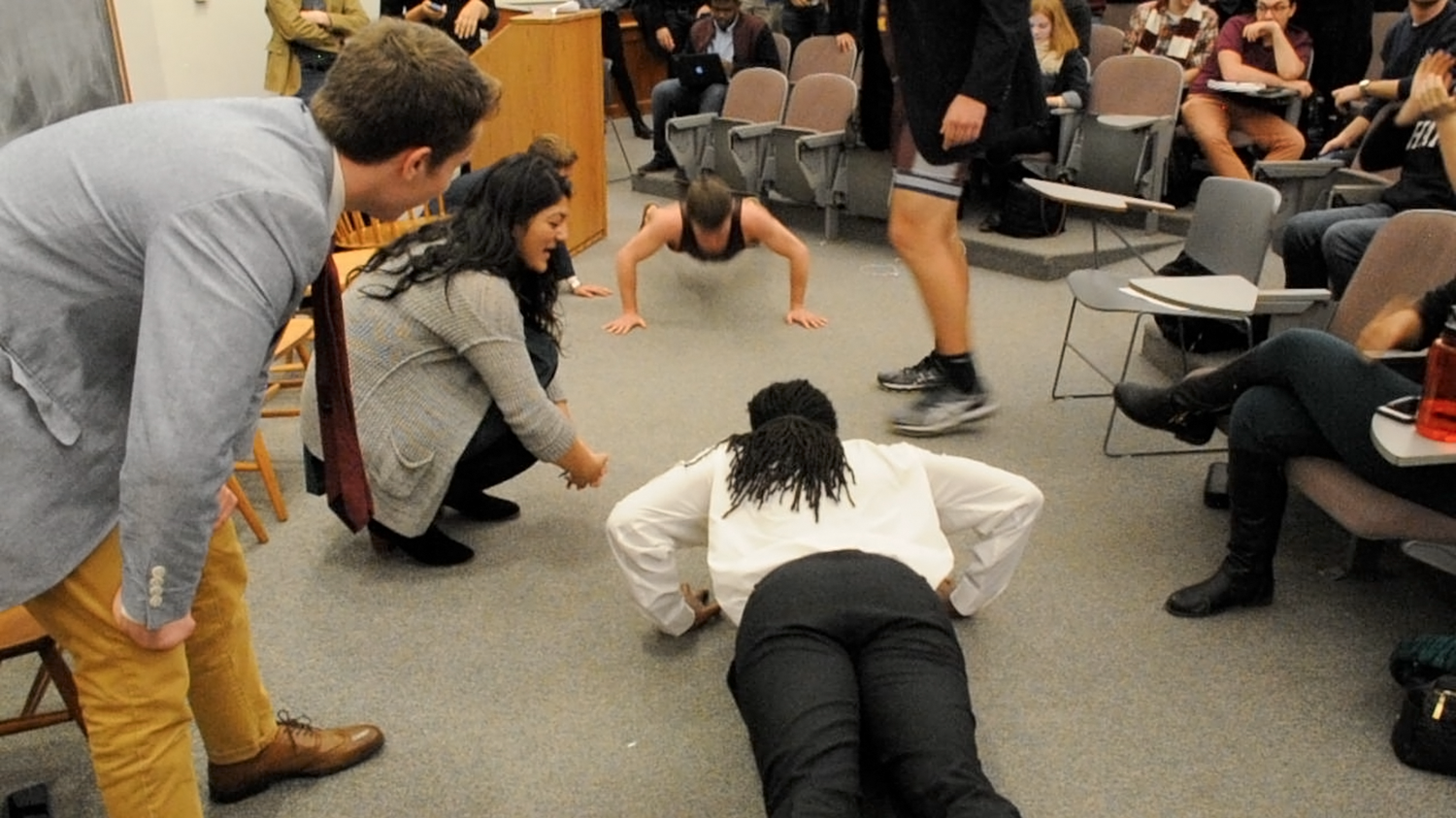 The debate also featured more lighthearted moments when the candidates had the opportunity to ask each other questions. Gajdzik and his running mate Jeffrey M. Ott ’16-’17 challenged their opponents to a round of water pong and a push-up contest, which prompted enthusiastic responses from the audience.