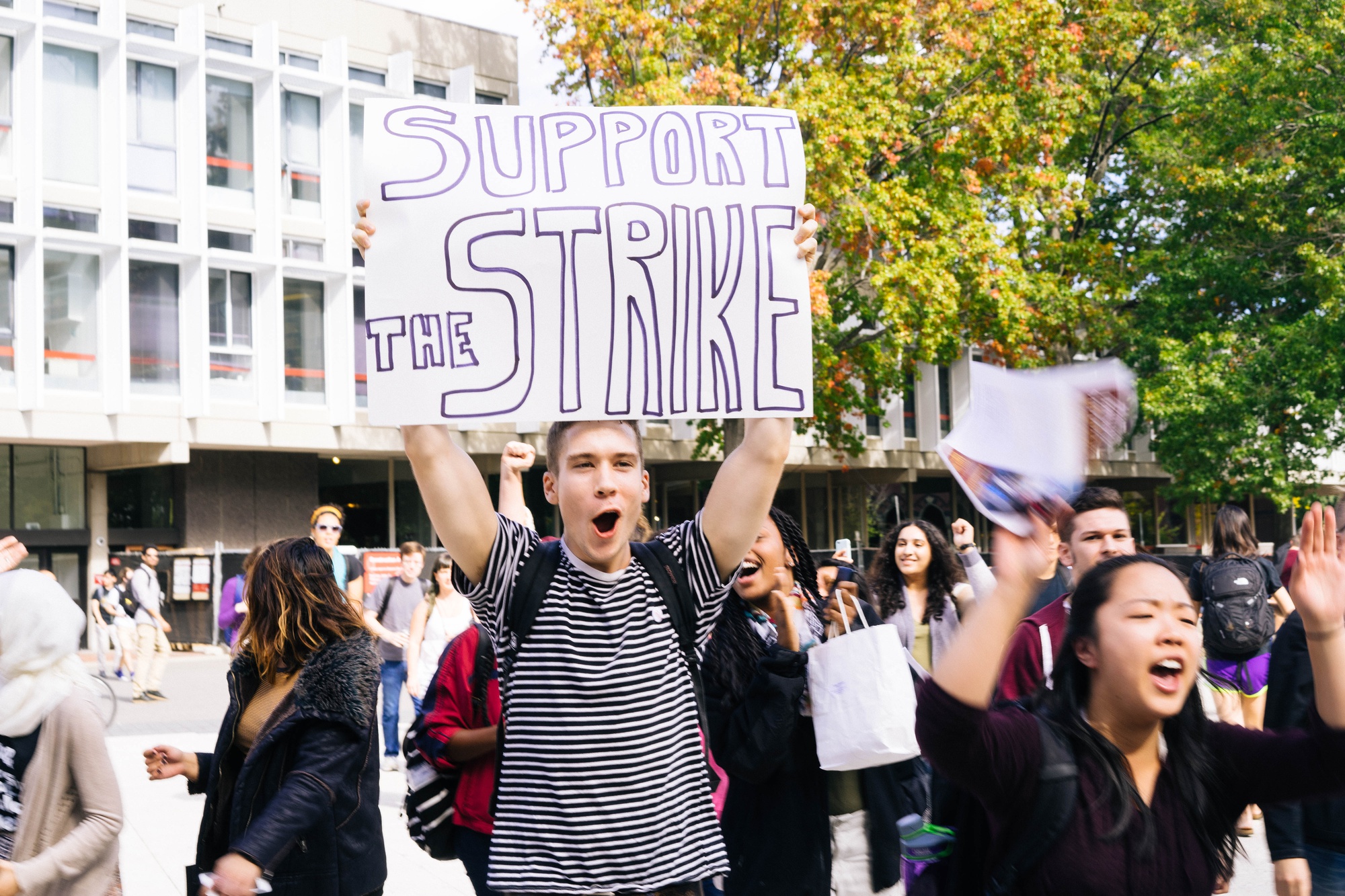 Students supporters walk out of Larry Summer’s guest lecture for Economics 10a: “Principles of Economics” in protest.
By Hannah Natanson, Crimson Staff Writer

The protests began at 10:30 a.m., when Divinity students gathered at HDS before proceeding to the Science Center Plaza to join striking HUDS workers for a rally. Soon after, hundreds of College students walked out of their afternoon classes at 12:30 p.m., before meeting HUDS strikers by the John Harvard statue to hold another rally organized by the Student Labor Action Movement, an undergraduate activist group. 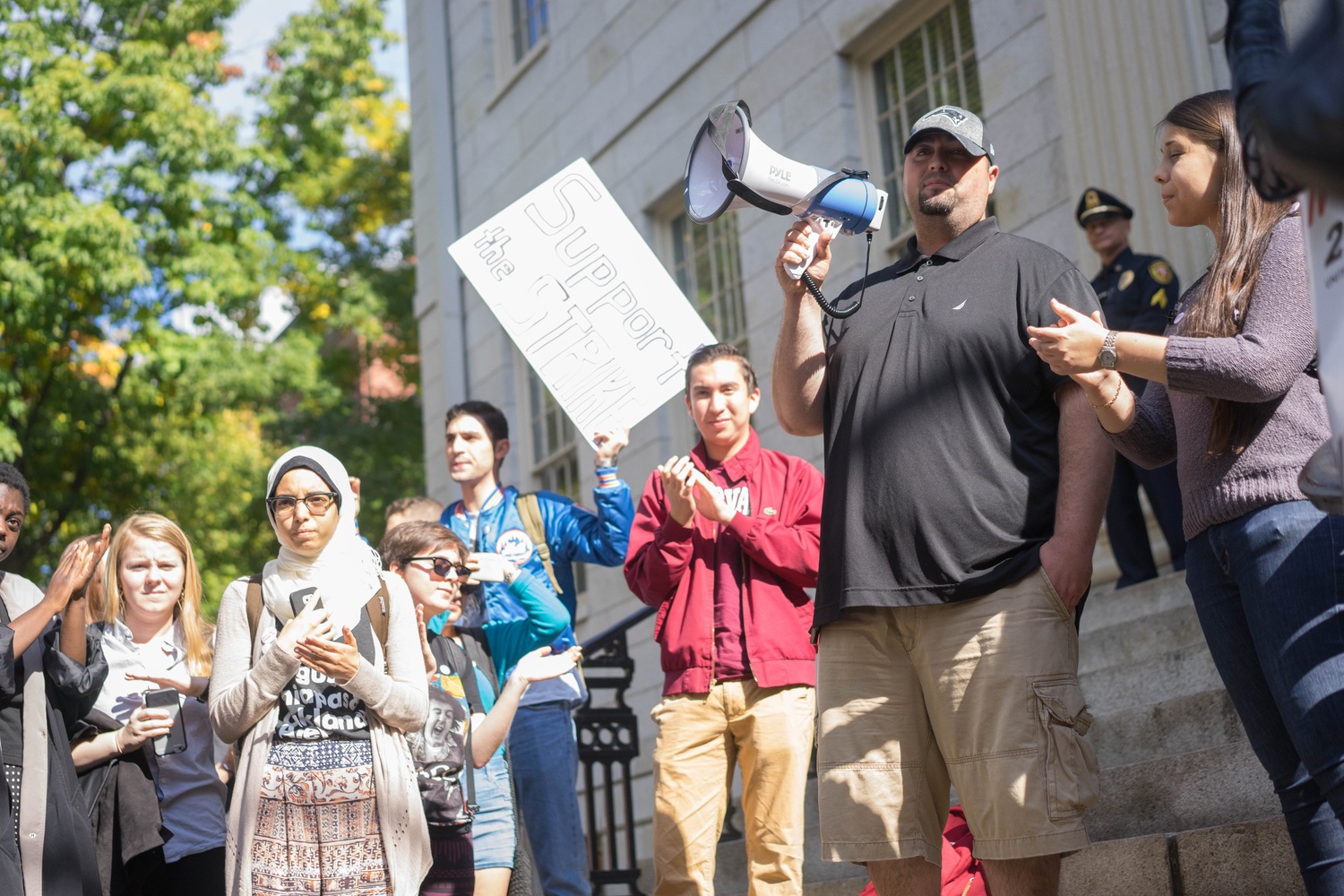 John S. Martin, an ID checker in Annenberg, gives a worker’s perspective on the strike. By Jason K. Thong

“That’s awesome [that] they’re out here supporting us,” Angel D. Hernandez, a HUDS employee who normally works in the Harvard Faculty Club, said of the student-led protests. “That made me feel so good, sentimental, respected from the community, the students. I love them.”

Divinity School students, with yellow flowers adorning their hair and buttonholes, walked to the Science Center Plaza while singing “Lean On Me” and “We Shall Overcome.” The flowers represented students’ desire for “peace in the community,” said Nestor J. Pimienta, a Divinity School student who helped plan the event. 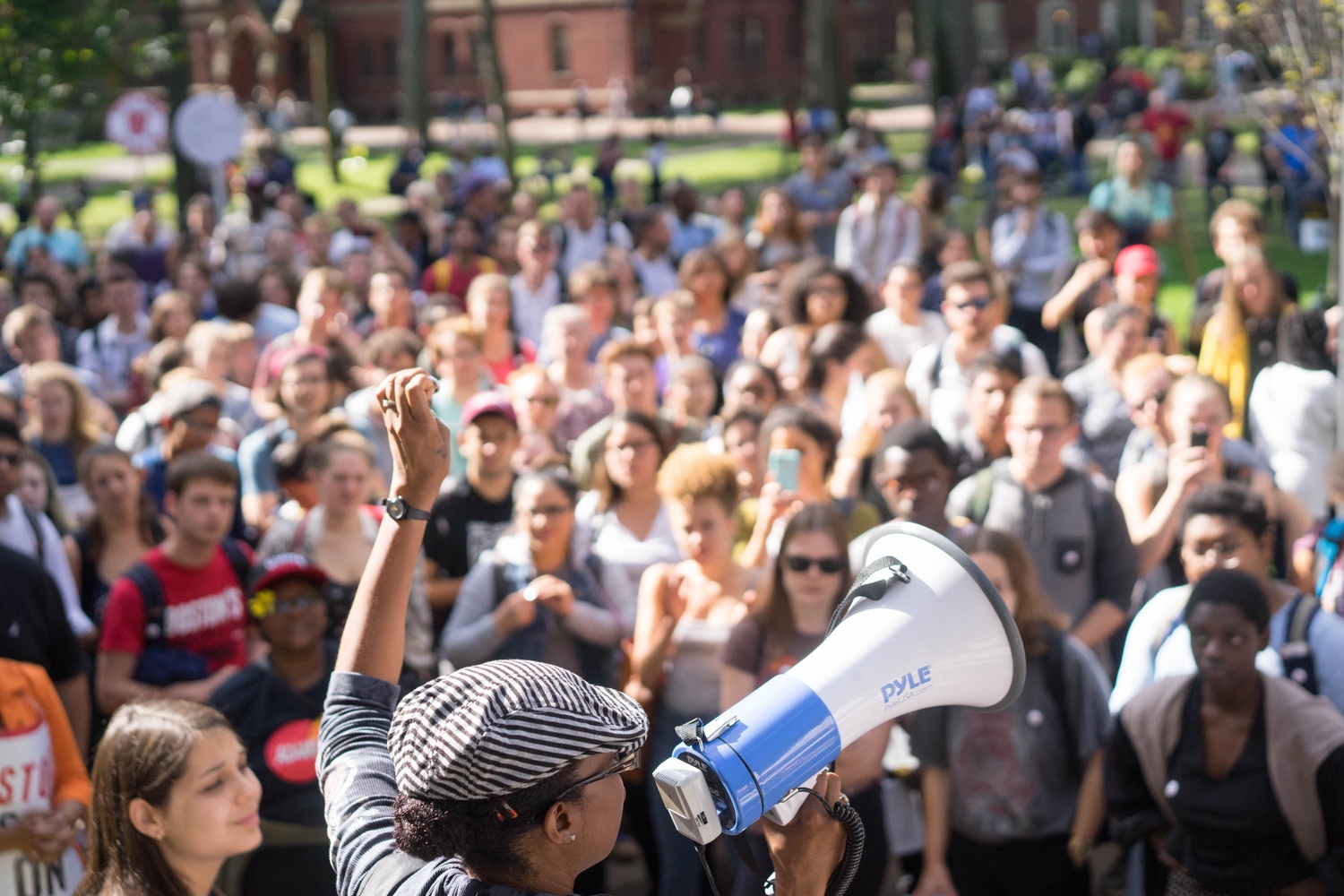 Protesters gather in support of the strike. By Jason K. Thong

HUDS worker Aaron J. Duckett spoke first at the rally, criticizing Harvard for what he deemed its stingy treatment of employees. He received loud applause from the crowd—a mix of roughly 300 HUDS strikers, Divinity and College students, and a few tourists.

“We used to get a turkey on Thanksgiving [from Harvard] but over the years that turkey got smaller and smaller and smaller until now we get no turkey,” Duckett said. “This is representative of Harvard’s attitude towards us, [but] now, instead of taking a turkey away from us, they want to take away our health care.”

“You stood with my community before it was popular, before it was safe,” Hood told the assembled HUDS strikers. “And so, from the LGBTQ community at Harvard Divinity School this morning, I have a message for you: We are all HUDS!”

Before heading over to the SLAM-led rally in the Yard, speakers and strikers sang one last rendition of “Lean On Me” and lunched on bread passed around by Divinity students. The joint breaking of bread “symbolized that we’re sharing in the struggle,” Pimienta said.

In the meantime, dozens of Harvard students had left class early and marched single-file to the Yard, shouting slogans. After chants of “No justice, no peace!” subsided, Kennedy School lecturer Timothy P. McCarthy ’93 ascended the steps of University Hall to address the crowd, which had reached hundreds of people.

McCarthy announced to cheers that he had “cut short” his lecture in Culture and Belief 49: “American Protest Literature from Tom Paine to Tupac” to walk out with his students. He then read aloud the text of a petition now circulating among Harvard faculty which, he said, had already garnered more than 150 signatures.

“Harvard refuses to do the right thing,” he said. “This is unacceptable to us. As faculty members we recognize that HUDS workers not only serve food but also create a sense of community in ways that are invaluable to Harvard.”

John S. Martin, a HUDS worker in Annenberg dining hall known affectionately by many Harvard students, also spoke at the rally. Martin said he is striking for his wife and two children.

Afterwards, as students and workers alike slowly trickled out of the Yard, SLAM member Itzel L. Vasquez-Rodriguez ’17 said she thought the rallies had been successful.

“It was a really beautiful thing to see students walk out of their classes and be joined and be greeted by HUDS workers who were rallying,” she said. “At the end of the day we all make up one community—you can’t have Harvard without the HUDS workers.”