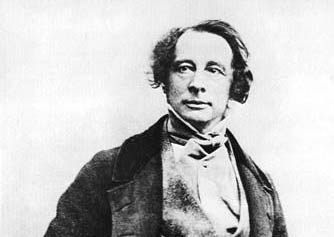 A Moist and Oystery Twinkle: Charles Dickens at Harvard

Born on Feb. 7, 1812 in Portsmouth, England, Dickens spent most of his early life in his home country. Later, once his career had taken off, the famous writer and social critic began to conduct international tours to promote his novels. At the age of 29, he made his first trip to North America.

Dickens arrived in Boston Harbor on Jan. 22, 1842. He stayed in the Tremont House, located at the intersection of Tremont and Beacon St. in downtown Boston. (The hotel is just a short walk from Park Street station, though the original building is no longer there.)

During his stay, Dickens became very close with two Harvard Professors: Cornelius Conway Felton, a professor of Greek literature who would later become President of the College from 1860-62, and Henry Wadsworth Longfellow, Smith Professor of Modern Languages. Dickens had already been aware of the professors’ existence, but first cemented friendships with them at a gathering in his rooms in Tremont House on Jan. 26, 1842.

These men became quite fond of one another. “Dickens has arrived,” Longfellow wrote to his father on Jan. 30, 1842. “He is a glorious fellow.”

The feeling was mutual. “The Professors at the Cambridge university, Longfellow, Felton, Jared Sparks, are noble fellows,” Dickens wrote to his friend John Forster.

That weekend, on Feb. 4, Dickens met up with his new friends again. Alongside several other guests, Dickens dined at Henry Wadsworth Longfellow’s house on Brattle St. Formerly George Washington’s headquarters during the Siege of Boston in the Revolutionary War, this building is now a national historic monument.

The next day, Dickens left Boston for New York, making stops in Worcester, Hartford, and New Haven. Felton joined him for three weeks on this trip, and returned to Cambridge on Feb. 26. On Mar. 14, 1842, almost three weeks after Felton’s return to Cambridge, Dickens wrote to him, “We and the oysters missed you terribly in New York.”

In the same letter, he mentioned oysters a second time. He wrote, “Come to England! Come to England! Our oysters are small, I know; they are said by Americans to be coppery; but our hearts are of the largest size.”

Dickens wrote again of oysters in a letter to Felton on May 21, 1842, while addressing the professor’s mild complaint about his joints. Dickens wrote, “They can’t be stiff,” then explained that “at the worst they merely want the air of New York, which, being impregnated with the flavour of last year’s oysters, has a surprising effect in rendering the human frame supple and flexible in all cases of rust.”

In the same letter, Dickens jokingly mentioned a passing concern of his. “A terrible idea occurred to me,” he wrote. “The oyster sellers—what do they do, when oysters are not in season? Is pickled salmon vended there—do they sell crabs, shrimps, winkles, herrings?—The oyster openers, what do they do?”

In a letter sent from London on July 31, 1842 to Felton, Dickens wrote about Edward Dando, an infamous dine-and-dasher of the 1830s. “He was an oyster-eater, my dear Felton. He used to go into oyster-shops, without a farthing of money, and stand at the counter eating natives, until the man who opened them grew pale, cast down his knife, staggered backward, struck his white forehead with his open hand, and cried, ‘You are Dando!!!’” Why share the story? Perhaps Dickens saw a part of himself in this gourmandizer.

On Jan. 2, 1844, Dickens heard from his beloved pen pal and the oysters struck again: Dickens claimed that he felt “a moist and oystery twinkle in my eye” upon receiving Felton’s latest letter.

Fifteen years later, little had changed, and Dickens continued to write about oysters to Felton. “We shall yet come round to joviality and Oysters,” he wrote to his friend on June 20, 1859, anticipating his next trip to Boston. He continued to express his interest in returning: “Now, I begin to have hopes that I may possibly enjoy the great sensation of reading ‘A Christmas Carol’ to American listeners.”

In “A Christmas Carol,” published the year after his 1842 trip to Boston, Dickens labeled Scrooge “as solitary as an oyster.” But it is hard to believe that oysters represented solitude to Dickens—for him, oysters are to be consumed in large quantities, and preferably, in the company of important Harvard men.