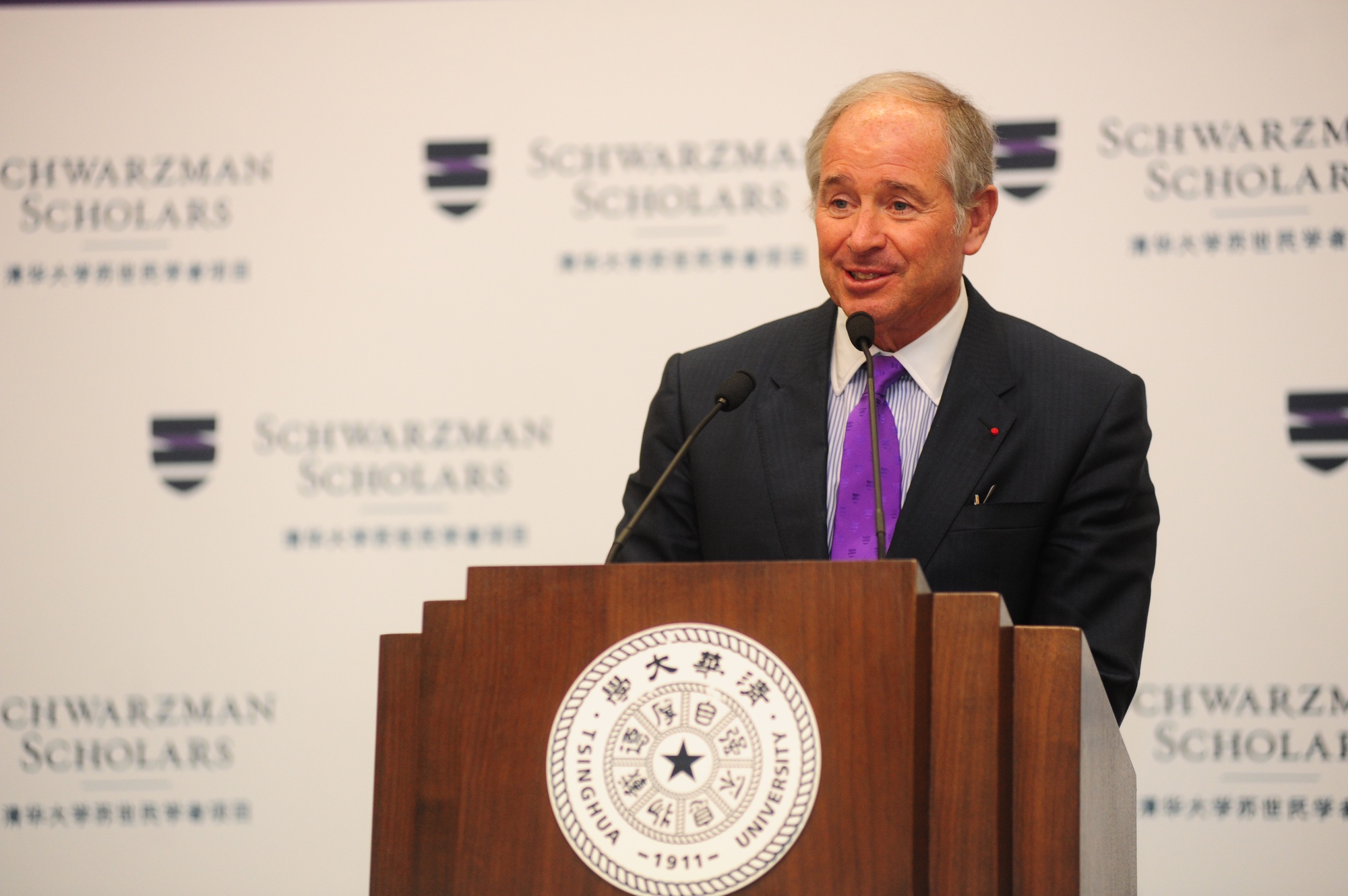 Q&A with Stephen A. Schwarzman

What does Blackstone's co-founder Stephen A. Schwarzman have to say about his latest endeavor, Schwarzman Scholars?
By William C. Skinner

On Thursday, Apr. 7, FM sat down with Blackstone chairman, CEO, and co-founder and Harvard Business School alumnus Stephen A. Schwarzman, who was on campus promoting his latest endeavor, Schwarzman Scholars. Formally launched in 2013, Schwarzman Scholars is a new, fully-funded master’s degree fellowship at Tsinghua University in Beijing. The first class of 111 scholars from around the world are set to begin their studies this fall.

Fifteen Minutes: So, why did you decide to start Schwarzman Scholars?

Stephen Schwarzman: I was involved with Tsinghua University and they were looking for me to do something significant as part of their 100th anniversary. I chose to start Schwarzman Scholars because I saw the potential for the world to become focused and unhappy with China, in large part because of the populism that was growing throughout the world. It seemed to me just a matter of time before politicians would use populist frustrations to get angry at someone, and I thought China would be in the gun sights.

FM: You had the opportunity to meet many of the finalists for this first group of scholars. Can you describe to me what you're looking for in an ideal Schwarzman Scholar?

SS: What we're looking for are people who we think have the opportunity to make a major impact on the world as opinion-makers and leaders in their field of interest. We assembled a group of really diversified and highly successful people, ranging from General Petraeus, heads of countries, and business people, as well as academics, to interview our 300 finalists out of 3,000 applications to see which one of them fit the criteria of evolving into someone of consequence for the balance of their life.

FM: Schwarzman Scholars come from a wide variety of backgrounds and life experiences. How do you believe that these kinds of diverse backgrounds will enhance the overall program?

SS: Well, you never know where talent comes from. People come from all over the world, different social backgrounds, experiential backgrounds. At the end of the day, all we care about is what the final product is of that person. Are they going to be the major leaders and opinion-makers of their era? That's what we're looking for. Hopefully, we'll be good at picking people like that.

FM: In your view, why should individuals without any prior familiarity with China or the Asia-Pacific region be interested and put Schwarzman Scholars on their radar?

SS: China, in certainly the lifetimes of those people, will be the largest economy in the world. It'll have the largest population in the world, and it'll be a major source of impact on the world they live in. To not understand what's going on with the largest and increasingly powerful country in the world is really a shortfall. It's a miss. The Schwarzman Scholars provides a unique way of learning about it. I think for people who aren't experienced it's an opportunity of a lifetime.

FM: Talking more about that negative perception of China, in what ways do you think that the scholarship will be able to chill growing American animosity toward China?

SS: I think that animosity towards China will probably be a cyclical kind of phenomenon. Schwarzman Scholars on a long-term basis is designed to have a cadre of people who can make their own views about China. There is no party line. These are all super, super intelligent, super independent individuals who are being selected. Over time, they'll have their own perception about China.

When society starts moving in a way that becomes very negative, whether it's in the West or any other place, I've always found that it's very useful to have people around who actually know what's happening. Part of the job, longer-term, for Schwarzman Scholars is to be able to inform people in effect what the truth is rather than just have a system respond to people's fears or people's imagination.

FM: How do you envision Schwarzman Scholars’ potential to remove barriers for foreigners seeking to do business in China?

SS: China is a developing country. There are parts of the Chinese economy that are either relatively closed, through legislation or by regulation or by tradition, that need to be opened. Having a cadre of people who train there who can point out those problems and help talk to their friends over time, along with the evolution of China as an economy, should make an impact, along with the rest of the world wanting China to make those changes.

FM: As you previously mentioned, you've assembled a cadre of international business, political, and academic leaders to advise you in creating this program. How have their insights shaped the scholarship's goals and missions?

SS: Well, I'm currently a business person, not an academic, and so the first thing we had to do was assemble a group of terrific academic experts, because this is, at the end of the day, an academic program, granting a master's degree. We had two professors, for example, from Harvard. Bill Kirby and Warren McFarlan helped us and assembled a much broader group of about 23 professors and heads of universities from a a variety of the major universities in the world to advise us on what should go into a program like this. We also have on our advisory board Henry Kissinger, most of the Secretaries of State and Treasury Secretaries in the United States, and heads of foreign countries, to just give overall guidance.

We assembled a critical mass of people who had domain expertise in different aspects of what the program would do.

I would give us an A grade for creating all of the infrastructure that this group of lifetime experts on China but people who are fundamentally living in the West have been able to provide.

FM: Lastly, obviously you care a lot about this program. You've come to Harvard. You met with many of the finalists and the two most recent scholars from Harvard. You've really played an instrumental role in putting your name out there on the program and shaping the mission and goals. Right now, where do you see the program 25 years from now?

SS: Twenty-five years from now, I see the program having fully institutionalized and having graduated at that point about 5,000 graduates who will be spread all over the world, with a concentration in the U.S. Students from the earlier classes will getting to be around 50 years old and be making a real impact on society. What'll happen with people of that talent is that unexpected and new things will get hatched as a result of them talking together, interacting, being involved with whether it's government, business, media, academics, and they'll start having a really profound impact on the world.