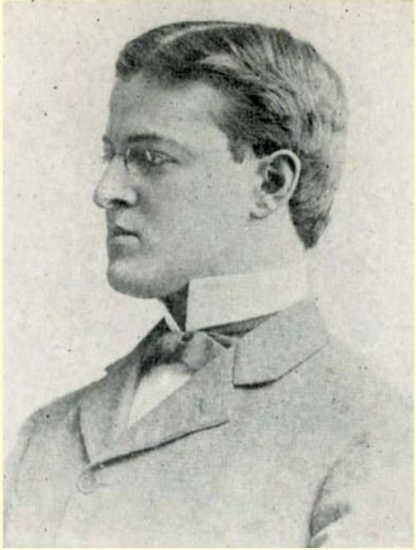 The Man Behind the Seals: La Vie of Rose

Few have heard of the man behind the seals: Pierre de Chaignon la Rose, a celebrated heraldry expert and member of the Class of 1895.
By Madina Radjabova

From student IDs to the flags in the Yard, Harvard’s seals appear everywhere. Each of the University’s various branches has its own, from the School of Engineering and Applied Sciences—which unveiled a new design in 2007—to the Law School, which recently came under heavy scrutiny because of its apparent connection to slavery.

Despite this public controversy, few have heard of the man behind the seals: Pierre de Chaignon la Rose, a celebrated heraldry expert and member of the Class of 1895. While serving on the Committee on Arms, Seal, and Diplomas, he designed the seals of all the graduate schools and most of the residential colleges of the University. “[Rose] had a vocation,” his obituary in The Crimson reads, “heraldry. His ability and knowledge were of the first order, and his consequent reputation was international.”

La Rose’s fascination with family history didn’t come out of nowhere. His parents allegedly changed his name from Peter Ross to better represent their French heritage. La Rose inherited their interest: After Harvard, he would spend time reconstructing his family tree on the walls of his rooms. According to his obituary, “He was proud of an ancient French lineage, and his walls were hung with old family portraits.”

After studying at Phillips Exeter Academy, la Rose enrolled in Harvard College, graduating with a Bachelor of Arts in 1895. On the surface, he was a typically overcommitted Harvard student, joining the Hasty Pudding, the Signet Society, and the Harvard Monthly. He was also elected to Phi Beta Kappa, supposedly “without ever taking a single lecture-note.”

His freshman year roommate, Daniel G. Mason, respected la Rose’s excellent taste. “Of all my friends,” he wrote in 1936, “he had the surest nose for the best, whether in letters, music, the graphic arts, or the more general arts of life.” He would observe as la Rose pontificated about “doctrinal subtleties” of the Bible to his close friends, played piano in their suite, or energetically officiated at tea gatherings held in their room, chatting about a range of topics and often carrying the conversation. In contrast, la Rose’s passion for the “graphic arts” shone through when he was alone. He spent much of his free time designing and perfecting bookplates, or the personalized designs printed in the inside covers of books.

After graduating, la Rose taught in the English Department at Harvard for seven years before resigning in 1902. For the next three decades, he would occupy himself writing literary and artistic criticism, mostly, anonymously or under a pseudonym.

In 1933, he would put his heraldic skills to use. As a member of the Committee on Arms, Seal, and Diplomas, which was created to review the history of Harvard seals in preparation for the University’s tricentennial celebration, la Rose embarked on a project to create designs for the new seals. For the residential colleges, he drew inspiration from the family seals of the individuals after which the colleges were named. His compositions were often derived from the family seals of the benefactors of the different schools.

Eighty years later, this practice has generated some controversy. The Law School’s seal, which is derived from the slaveholding Royall family’s coat of arms, was conceived in memory of Isaac Royall, whose gift endowed the first professorship in law at Harvard. After much deliberation, the Harvard Corporation discarded this design in March and is currently in the process of drafting a new one.

Other seals have been updated to reflect transitions in the institutions themselves. The School of Engineering and Applied Sciences debuted its new seal in 2007. Its design is based on la Rose’s but reflects the growth of SEAS from a division to a school.

La Rose could not have anticipated the many changes and controversies that would surround his creations. He lived a quiet life near Harvard Yard, in what is now the Knafel building. Although he interacted regularly with the students and faculty, he was regarded as lonely and spent much of his time in isolation. Before he died, he commented on the ever changing nature of the institution, perplexed at its ability to morph and yet remain the same.