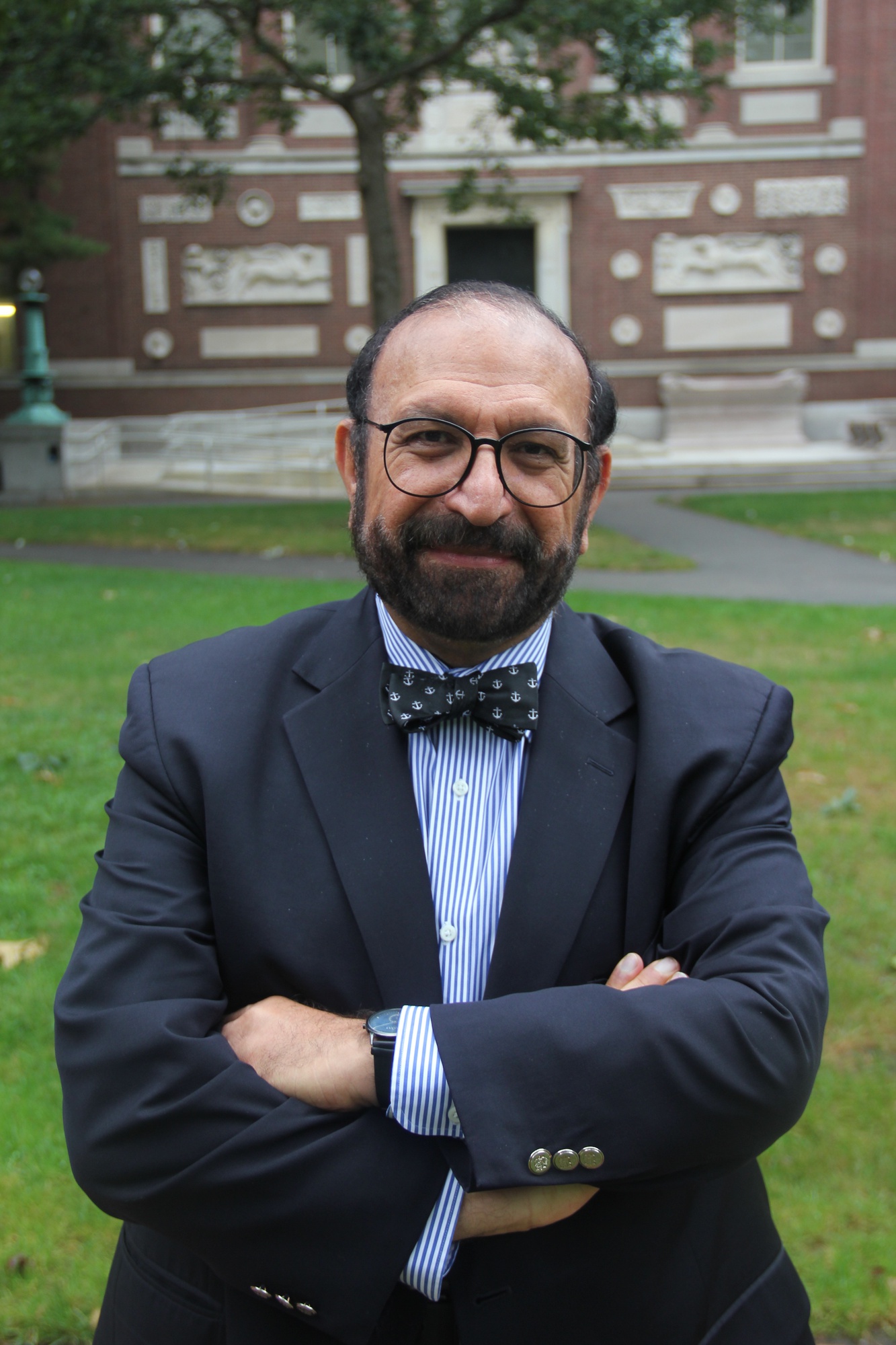 Khoshbin thinks with both sides of his brain—a truism that he, as an award-winning neurologist, surely understands in greater depth than most of us ever could.
By Emily B. Zauzmer

Dr. Shahram Khoshbin’s home is filled with objects that suggest he is an artist: a portrait he sketched of his wife and daughter; a large print of a post-Impressionist masterpiece; a bookshelf lined with tomes about art and calligraphy; an illustrated travel journal.

But Khoshbin’s day jobs tell another story. Whether he is practicing neurology at Brigham and Women’s Hospital and Boston Children’s Hospital, or serving as an Associate Professor of Neurology at Harvard Medical School, he wakes up early each day to pursue a career in the sciences. He and his wife Laura, former interim Faculty Deans of Currier House, co-lead a freshman seminar called “Medicine, Law, and Ethics.”

In other words, Khoshbin thinks with both sides of his brain—a truism that he, as an award-winning neurologist, surely understands in greater depth than most of us ever could.

Khoshbin’s passions for art and science are complementary rather than contradictory. “Without something like [art]…you can’t survive [as a doctor],” he asserts. “You go to arts, and that’s where you allow yourself to be able to look at the drama [of medicine]—both at the tragedy as well as its beauty.”

As an undergraduate at American University in Beirut, Khoshbin originally grappled with his dissimilar callings. “My dad made the mistake of telling me... ‘Well, I expect you to major in pre-med,’” Khoshbin says. “As soon as I got to college, I majored in fine arts, as far away as I could.”

Khoshbin still planned to become a doctor, though, so he enrolled in both creative and scientific courses at college. His thesis—about the color theory behind Vincent van Gogh’s work—put all his coursework to use. Van Gogh quickly became a source of personal fascination for him. “I fell in love with him almost instantaneously,” Khoshbin recalls. “I had to study the neuroscience of vision to understand what he’s doing with our brain.”

At Johns Hopkins Medical School, Khoshbin attended a lecture by Dr. Norman Geschwind ’46, who labeled Fyodor Dostoyevsky’s literary productivity a symptom of epilepsy. After the talk, Khoshbin mentioned van Gogh’s comparable pattern of artistic output to Geschwind. “Oh, he had epilepsy,” the latter replied. “And his medical records are available.”

Intrigued, Khoshbin set off for Marseille, France, where he met the neurologist who owned those records. At the suggestion of Geschwind, Khoshbin moved to Boston, where he deepened his research into van Gogh’s condition by working with epileptic patients. Each year, he gives a lecture about van Gogh’s disease to the Harvard College Program for Research in Science and Engineering.

Khoshbin brings that same interdisciplinary spirit into his classrooms. At Harvard Medical School, for example, he and Dr. Joel Katz head “Training the Eye,” in which they teach students to apply methods of artistic analysis to patient diagnosis. He and his wife contextualize medicine and law within questions of ethics in their freshman seminar.

Khoshbin’s many pursuits—the right-brained along with the left-brained—still energize him all these years later. “There is not a day that... I’m not looking forward to my day,” Khoshbin says. “I’ve never had the feeling of, ‘Oh, I’m tired of this.'”