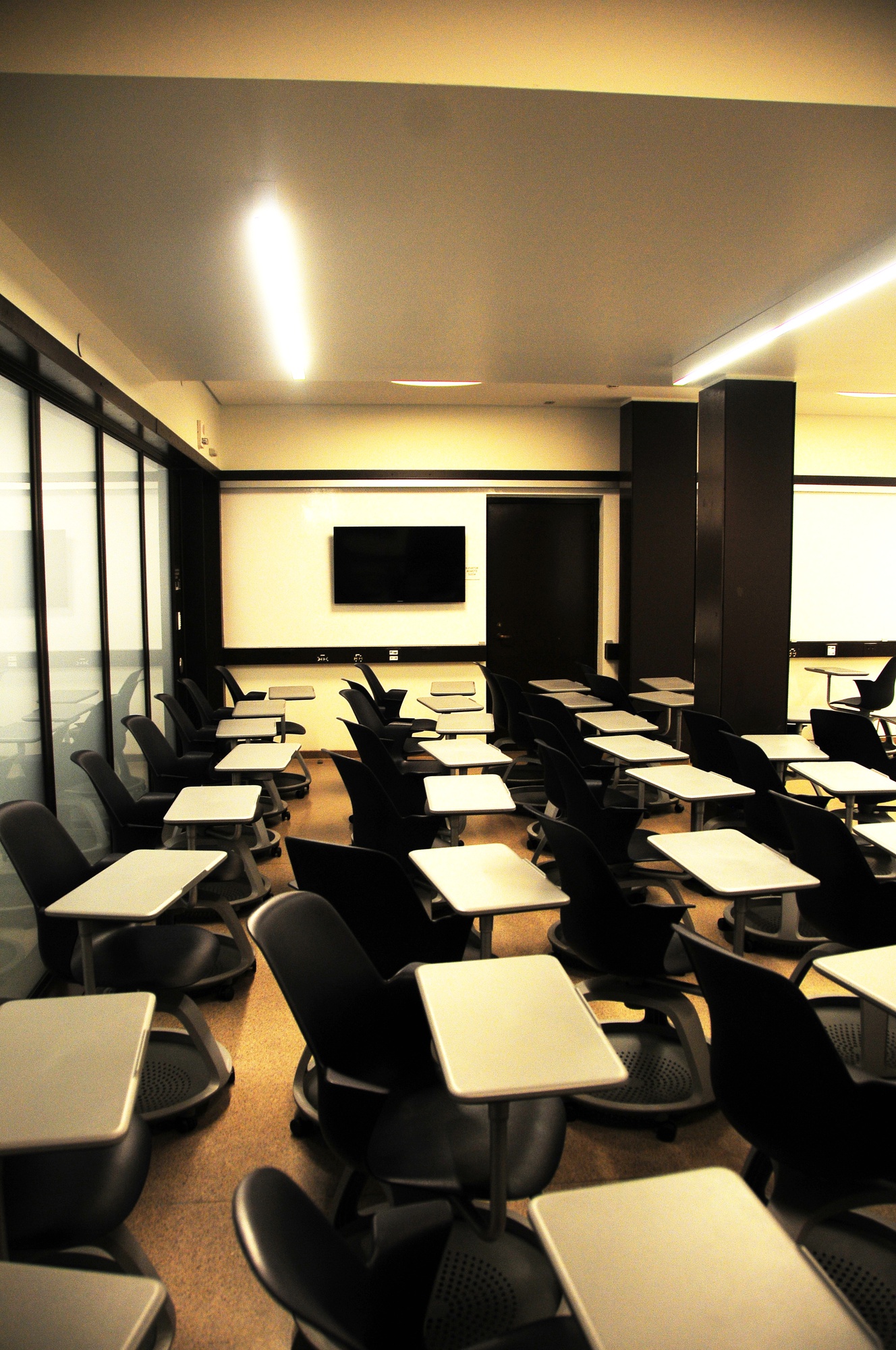 The "smart classroom" in Stone Hall of Quincy House contains improved technology, including touch-sensitive tablets and cameras. Renovations at Quincy House are a part of Harvard's attempt to foster learning communities throughout the houses in an era of rapid technological advancement.
Advertisement
Advertisement

​As a college student, you might forget that the accomplished professor at the helm of your lecture once sat in your seat. We asked professors who went to Harvard to write about their most memorable experiences with one of their own professors. Read on to find out why you really should be going to office hours.
By Liana E. Yamin 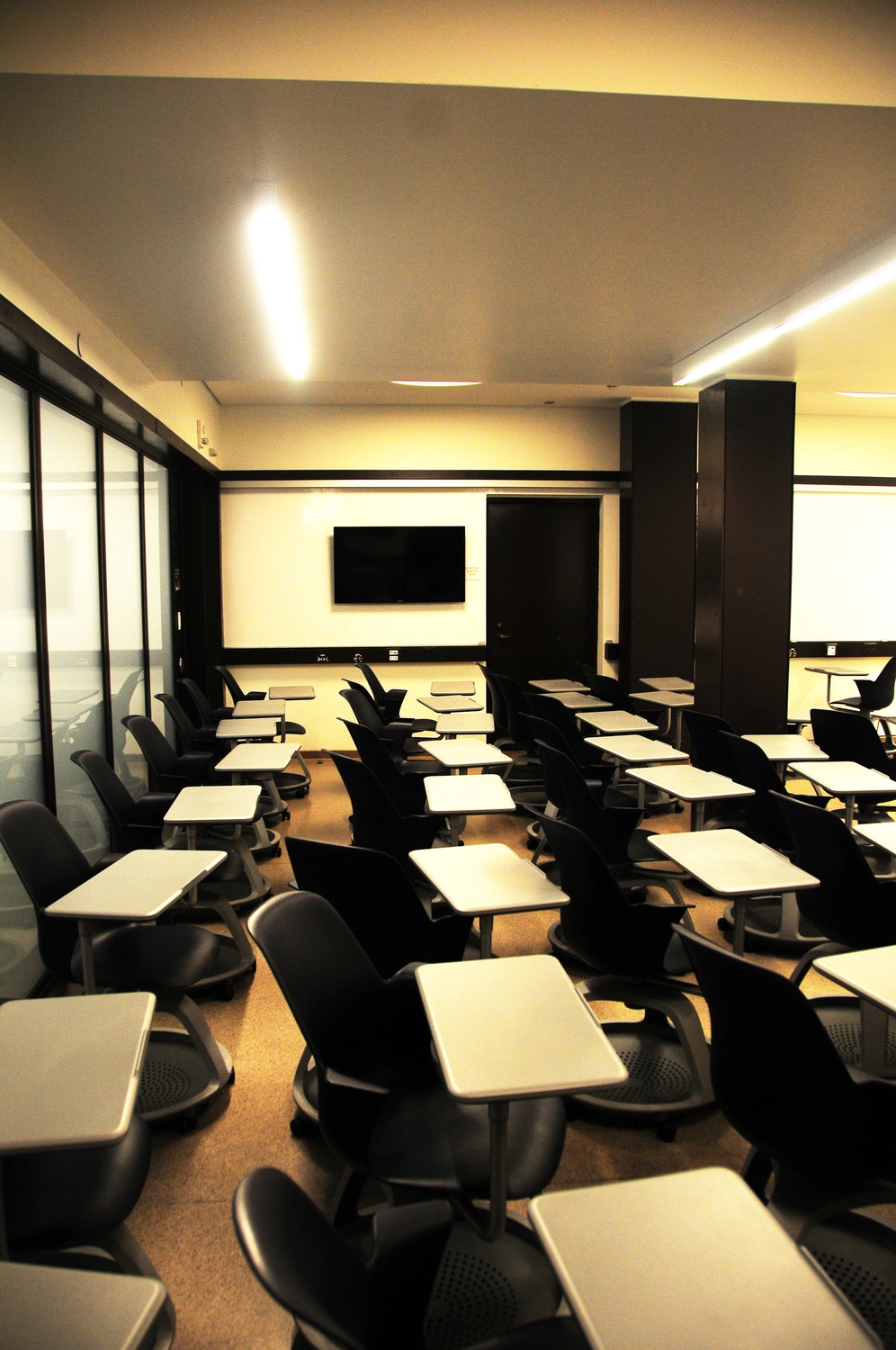 Daniel E. Lieberman ’86, Human Evolutionary Biology: One of my favorite memories is from my freshman seminar with Professor David Pilbeam in 1982. In order to estimate the brain size of an important fossil (Olduvai Hominid 7), I measured hundreds of skulls to try to come up with a regression equation that would predict the brain size of both chimpanzees and humans from the same set of measurements. The paper was due at the end of reading period, which back then was after the Christmas/New Year’s break. I took all the data home with me and spent pretty much my entire two-week vacation trying to derive an equation that worked, but I couldn’t. It ruined my vacation because I was sure I had failed and done something wrong. But when I brought the many reams of printouts to his office the first day of reading period in January, I remember he said: “Well of course, I thought that wouldn’t work!” For the record, we spent most of the next semester trying to find a solution, which eventually we did!

Harry R. Lewis ’68, Computer Science: Senior spring, my thesis and coursework all but finished, my Radcliffe sophomore girlfriend and I have gotten our initially horrified parents happy with the idea that we really are going to get married right after commencement. A precious USPHS commission will keep me out of Vietnam. But I still have one terrifying problem. I am enrolled in an independent study with Doris Aaronson in psychology, and with everything else going on in my life, I have done absolutely nothing for it. If I fail, I will not graduate. Everything—EVERYTHING!—will unravel catastrophically. I plaintively explain the high stakes to Doris. She agrees to pass me—provided that I return all the books she lent me three months earlier! I frantically search my room and finally find them all. Forty-eight years later, girlfriend and I are still married, and I hope I am paying forward my monumental debt by showing equal kindness to the students I teach today.

David J. Malan ’99, Computer Science: The year was 1996, and I was a sophomore shopping a course called CS50. I was a Gov concentrator at the time, and I wasn’t all that comfortable with the idea of taking a CS course, so I figured I’d take it pass/fail. It was the first lecture, and Professor Brian Kernighan was telling us how important it is to be precise when programming a computer, much like when trimming one’s beard. (A particularly long one he had.) In front of him were a few instruments, probably scissors and similarly reasonable options. But also some hedge clippers, electric and already plugged in. As I recall, we were to give him precise instructions for trimming his beard safely.

Professor Kernighan ended up cutting his beard that day with hedge clippers.

Matt Saunders ’97, Visual and Environmental Studies: The middle 1990s was a time of transition in VES, and as a “studio” concentrator it could feel pretty Wild West. Many classes had resident dogs or chain smoking or both, and I remember one course in which the TF and the puppy had the same name. The former always visibly flinched whenever the cry rang out: “Susie! Don’t pee on the floor!”

Times have changed, but that time didn’t seem too bad. The example of these practitioners, fully in their element, lit a fire in many of us. That’s the moment I really tuned in and fiercely devoted every ounce of curiosity towards art.

Howard M. Georgi ’68, Physics: Probably my most memorable academic experience as a Harvard undergrad came when Julian Schwinger thanked me in class. Schwinger, who shared the Nobel Prize with Feynman and Tomonaga in 1965, was an imperious lecturer who ignored questions and hurried out of the room at the end of class so his graduate students could not corner him. But he had challenged the class to do an integral that he thought would be useful in his research. I succeeded in doing it and put the result in his mailbox. I was stunned the next week when he acknowledged me by name.