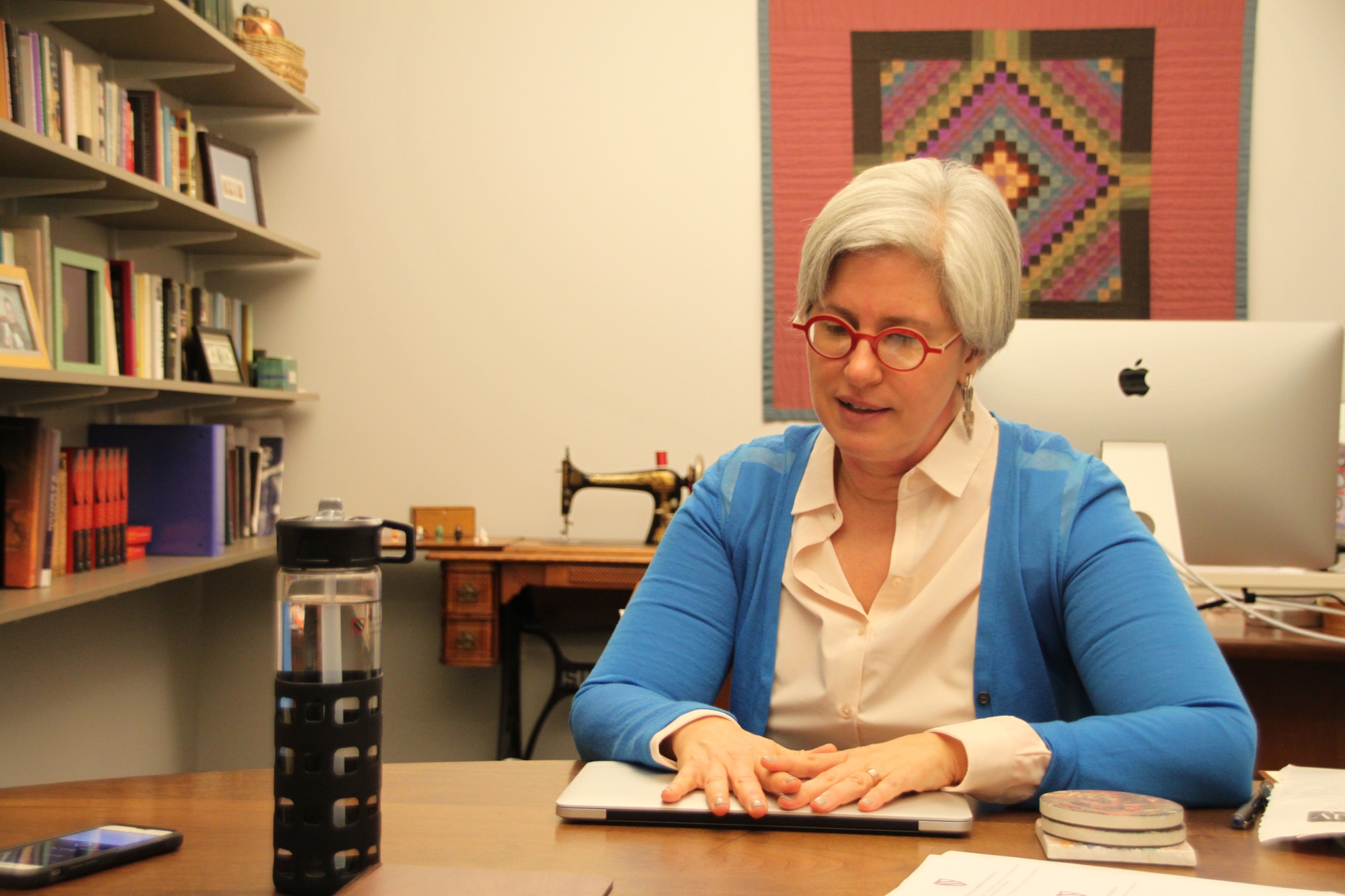 Hothead Paisan, Homicidal Lesbian Terrorist, isn’t your everyday comic-book hero. And “Altered Gazes,” the Schlesinger Library exhibition in which this 1991 comic is featured, is not your everyday collection.
By Frank M. Cahill

Picture a comic-book hero. He’s certainly over six feet tall. Some kind of aggressively masculine instrument is clutched in his disproportionately large hands. It’s likely his pecs are bulging through that thin, garish lycra suit. And without a doubt he’s brooding, eyebrows knit tight, caught in completely self-unaware contemplation of his own importance.

You probably didn’t picture a young woman in a backwards baseball cap and purple overalls holding a wrench in one hand and a jarred penis in the other. That’s understandable. Hothead Paisan, Homicidal Lesbian Terrorist, isn’t your everyday comic-book hero. And “Altered Gazes,” the Schlesinger Library exhibition in which this 1991 comic is featured, is not your everyday collection.

But then again, the Arthur and Elizabeth Schlesinger Library is not your everyday library. Founded in 1879 as an archive for Radcliffe College, Schlesinger has transcended its origins, becoming what Jane Kamensky, Director of the Schlesinger Library and Professor of History at Harvard, calls “a library of women’s history.”

Schlesinger, which celebrates its 75th anniversary next year, hasn’t always been so colorful. “For much of the last three-quarters of a century, we have been white, middle-class, and quite New England-centric,” Kamensky says, referring to demographics of the first women at Radcliffe. These days, the library’s challenge has been building on that legacy while attempting to capture the more complete history of North American women.

“Altered Gazes” is certainly a step—or rather a punk-rock strut—in this direction.

For Kamensky, the exhibit looks at “women as culture creators” in order to “tilt the sort of sex, drugs, rock-and-roll frame” that people traditionally place on women’s history. Exhibited materials range from lesbian pornographic magazines to marijuana cookbooks and zines discussing race and abortion. The objects in the collection are created by women, for women.

“Altered Gazes” draws chiefly on materials from the Ludlow-Santo Domingo Library, the world’s largest private collection documenting psychoactive drugs and their physical and social effects, with over 50,000 items from the collection on permanent loan to Harvard libraries. In addition to Schlesinger’s “Altered Gazes,” items from the Ludlow-Santo Domingo Library are currently on display in “Altered States,” a sister exhibition on sex and drug culture at Houghton Library.

Despite the clear progressive bent of the “Altered Gazes” collection, Schlesinger is by no means exclusively a feminist library. Though Schlesinger has collected “women’s radicalism” from the 19th century onward, Kamensky is wary to let that label define her work. “We collect the full spectrum of the history of American women and thought and activism around sex, gender, sexuality, and ordinary life,” Kamensky says.

This means seeking to acquire materials from ideologically diverse people and organizations, including those from across the political scale.

“Politically conservative women have been hugely important to especially the structure of post-Goldwater conservatism,” Kamensky says. “Those organizations and leaders are quite under-represented in our collections and in most public collections.”

Kamensky calls this myopia a “crisis.” She argues that “gender is at the heart of the way that American political parties have realigned in the last two generations,” and so without considering alternative angles and ideas, “historians really can’t understand the making of modern politics… I want researchers to be able to understand that story at Schlesinger.”

To Kamensky, this exhibition is a piece of a “broad diversity strategy that speaks to the whole University effort to move from being a homogenous space to a more pluralist space—to a place of real inclusion and belonging.”

Schlesinger is also attempting to carve out a greater role for itself in Cambridge. Among Harvard’s special collections, Schlesinger is unique in that it requires neither a Harvard ID nor letter of endorsement for access to materials. Additionally, Kamensky works with faculty at the Cambridge Rindge and Latin School, the only public high school in Cambridge, to bring students into the library and make the “treasures that live here feel like common property.”

So don’t be surprised if next Halloween, among the inevitable Batmen and Spidermen, you encounter a Hothead Paisan or two. When she gets into a scuffle with an entitled Superman over rightful ownership of a full-size Milky Way, my money’s on her.