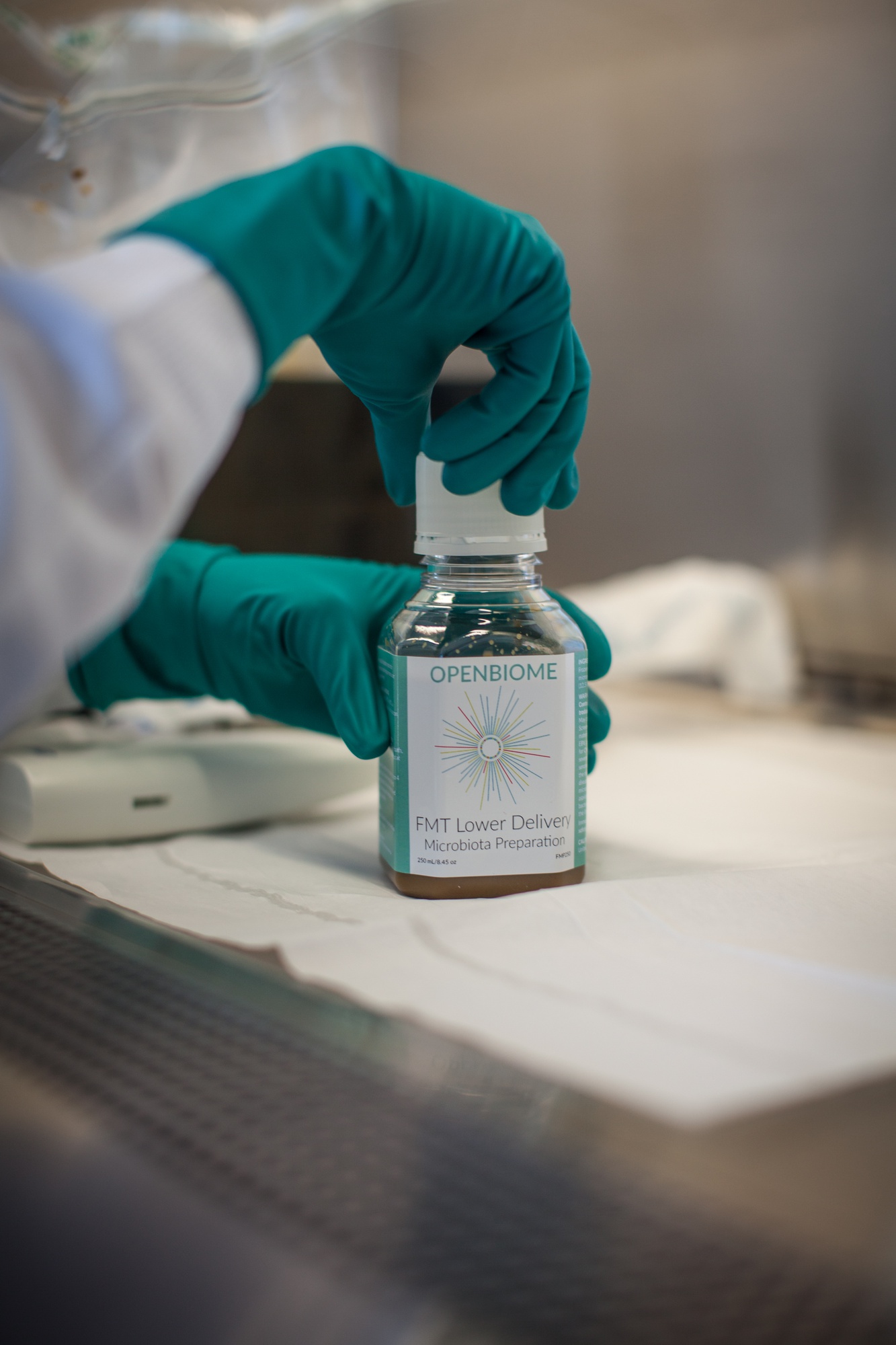 Pooping is a part of life everywhere, but I get the sense that here, it’s a lifestyle.
By Alicia M. Chen

This month, I celebrated the one-year anniversary of submitting my application to Harvard by throwing myself into an even more competitive applicant pool—one that’s way more open about personal hygiene.

I applied to donate my poop through a givepoop.org online form.

OpenBiome, based in Somerville, is the world’s first nonprofit stool bank. Their donor applications are open to everyone living in the greater Boston area—including people like me, a fresh-faced college student, eager to make $40 each time I defecate into a blue plastic Tupperware-like container that looks like it could hold Cool Whip.

If accepted, I’d take the T to their labs in Central Square, the closest donation center to Harvard, at least three times per week. I’d either donate on-site in one of their luxurious bathrooms, or poop in my dorm and rush the sample—that’s what they call it—to Central right afterward. The sample would then be transferred to a plastic filter bag, homogenized with cryopreservatives and a saline/glycerol solution, and packaged in dry ice, to prevent unsightly leakage during shipment. The final product is an opaque, silky liquid somewhere between dark and medium roast in color, packaged into bottles that look like smaller versions of Clover Food Lab’s ready-made coffee.

The poop that OpenBiome collects is used for Fecal Microbiota Transplants. They’re a tremendously effective—80 to 90 percent effective, in fact—treatment for Clostridium difficile, a hospital-acquired bacterial infection for which 20 percent of patients suffer recurring symptoms despite antibiotic use. Fecal transplants are also used in clinical trials, such as for Crohn’s disease.

Tom B. Leith ’16, Clinical Research Associate II at OpenBiome, emphasizes the growing popularity and success of fecal transplant procedures. “Even just a few years ago, there were just a couple thousand FMTs done in the United States. But we’ve shipped almost 30,000 treatments in the last couple years,” he says. “Making an impact on patients’ lives very rapidly is a cool part of working here.”

Last year, OpenBiome expanded their main office to the fifth floor at 200 Inner Belt Road in Somerville. They share the unassuming brick building with Finch Therapeutics, a company that handles OpenBiome’s manufacturing processes and works closely with them to collect and process the stool, and—bizarrely enough—with offices for Harvard Art Museums. My phone automatically connects to Harvard Secure as the elevator ascends. 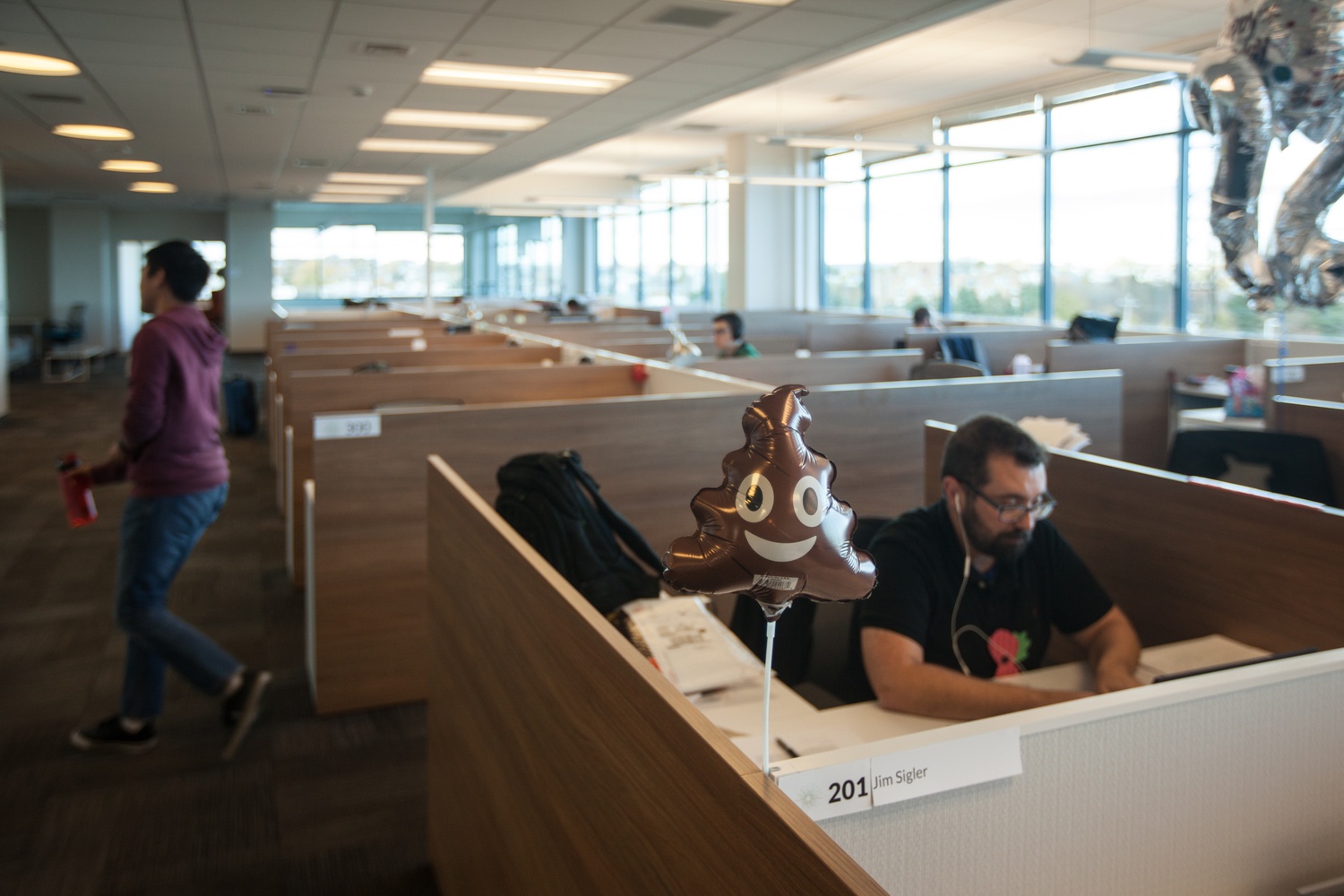 The office at OpenBiome in Central Square. By Courtesy of Erik Jacobs

OpenBiome’s offices are sunny, with open cubicles and floor-to-ceiling windows that offer panoramic views of Boston. The walls in the office are plastered with images of what, in any other office, might pass as decadent swirls of chocolate soft-serve ice cream: a mustachioed cartoon poop with glasses and a hat reading “Pooper Trooper”; a picture of everyone’s favorite crop top-clad bear captioned “Winnie the Poo.” The rooms are named after parts of the intestine: The Ileum is the name for the Biobank room, and the door to The Fundus is lined with poop emojis. A bug-eyed, poop-shaped balloon bobs above a cubicle.

Pooping is a part of life everywhere, but I get the sense that here, it’s a lifestyle.

Pratik K. Panchal, a graduate of the School of Public Health and a Clinical Research Fellow at OpenBiome, has worked in three different countries and says that OpenBiome has “the best work culture [he’s] ever seen… You talk about poop every day to someone new.” He smiles and shrugs as if to say: What more could you want?

I was convinced. OpenBiome, however, was less impressed by me. My pooper profile was rejected in the second round after I admitted to a little flirtation with antibiotics. It was one time, okay? But it turns out that the medication could still interfere with the bacteria in my gut. OpenBiome requires donors not to have taken antibiotics within the last three months, just to be safe. I was bitter at first—donors can make up to $13,000 a year!—but I get it. Poops have to be perfect. 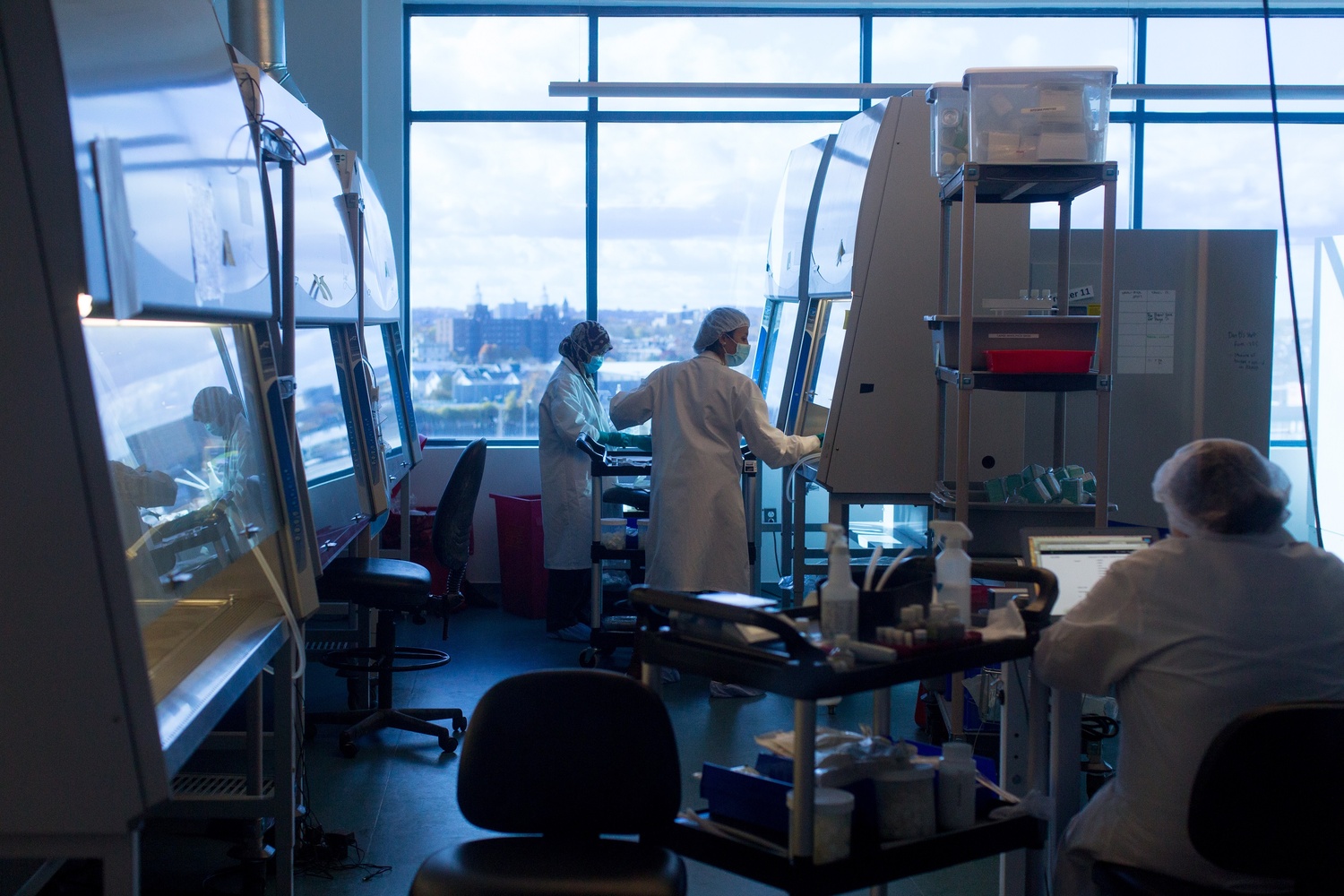 The OpenBiome lab. By Courtesy of Erik Jacobs

With its 2.8 percent acceptance rate, OpenBiome is almost twice as selective as Harvard College. You might make it through the initial evaluation—a short survey, a 200-question form, and a clinical visit—safe in the belief that your poop is a solid 10, but you might find out through the subsequent blood and stool analyses that your bacteria could harm, not help, the recipient.

Anyone can still apply to be a donor. If you think your gastrointestinal tract has what it takes—if you really, truly believe that your shit doesn’t stink—go forth and pick up where I left off, or even where more successful applicants have left off. The single largest donation to OpenBiome weighed half a kilogram, after all. Consider that a challenge.

As for me, I have to wait three months for the antibiotics to get flushed out of my system before I can apply again. Maybe that’s not a bad thing: I don’t know if I could spare the time or energy. I’m pretty pooped already.