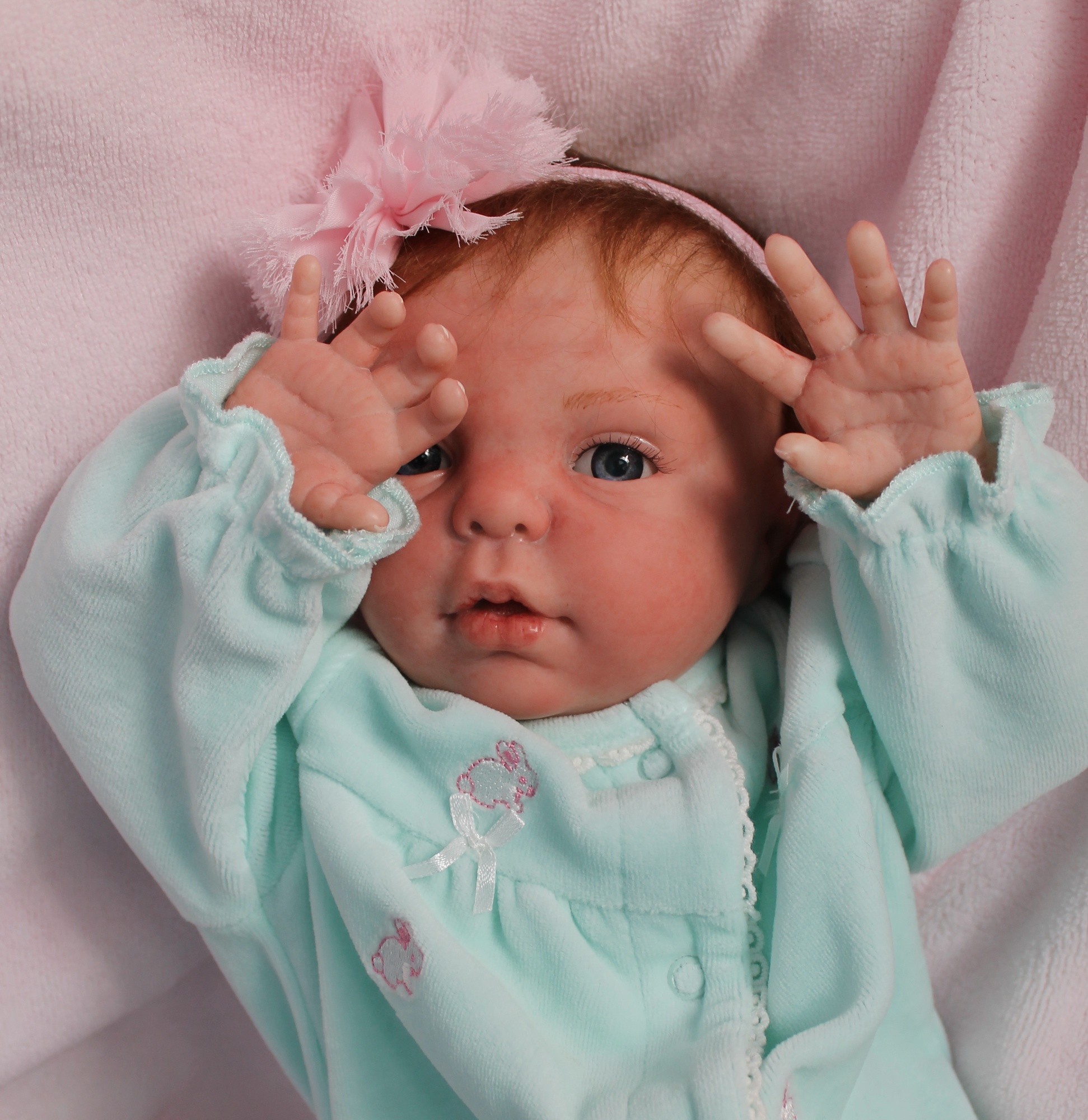 The “Uncanny Valley,” a term first coined by robotics professor Masahiro Mori in 1970, refers to the discomfort experienced when encountering human replicas which appear almost, but not exactly, like human beings.
Advertisement
Advertisement

The “Uncanny Valley,” a term first coined by robotics professor Masahiro Mori in 1970, refers to the discomfort experienced when encountering human replicas which appear almost, but not exactly, like real human beings. Reborn dolls can veer into that territory if they’re made poorly, but more often than not, what is peculiar about them is that they do cross the valley.
By Tarpley Hitt

Last summer, a New Hampshire police officer broke into a hot, parked car to rescue what he thought to be a months-old infant. Even after he smashed the rear window and retrieved the child, Lt. Jason Short did not realize something —at least anything besides the obvious—was amiss. According to WCVB, it wasn’t until after he administered CPR that Short realized the body he was trying to resuscitate had never been alive.

Short had encountered a “reborn”—a hyper-realistic baby doll so named because the original artists who made them would boil older dolls in hot water and strip them of their paint. Once bare, the doll artists would repaint, and thereby “rebirth” the dolls.

Today, most reborns aren’t made by boiling, but the name stuck, in part because it has picked up another valence: The dolls are exceedingly realistic, real enough to look “born.” Each doll takes about twenty hours of work to create, and around thirteen layers of paint. The finished product has delicately mottled skin, the faint outlines of veins, and small specks of moisture at the lips and nostrils. They have fine heads of individually threaded hairs. They are weighted with glass beads so they feel like infants when picked up, and baby powder patches woven into their torsos make them smell like babies, too. In almost every way, reborns resemble real babies.

These dolls are the fascination of a massive international community of doll-makers and collectors. There are clubs for enthusiasts, Etsy-style online retailers, dedicated subreddits, and even a culture of Youtubers who vlog with their reborns.

Among this community are Kathleen Bohmer George and Julie Bohmer Crosier, two older blonde sisters with explosive laughs, who run the reborn business, Until Forever Nursery, out of their homes in Williamstown, Mass. and Bennington, Vt. respectively.

On a frigid afternoon in January, the sisters are standing in the middle of Main Street in Bennington, worrying about where to find a baby blanket. Usually, watching the Bohmer sisters together is something akin to sitting front row at professional ping-pong: There’s barely time to see one joke land before it’s sent back spinning faster than it came. But at this particular moment, the sisters are sincerely concerned.

The “Uncanny Valley,” a term first coined by robotics professor Masahiro Mori in 1970, refers to the discomfort experienced when encountering human replicas which appear almost, but not exactly, like real human beings. Reborn dolls can veer into that territory if they’re made poorly, but more often than not, what is peculiar about them is that they do cross the valley. They fool us—and it’s precisely this easy believability which is making George and Crosier so anxious. 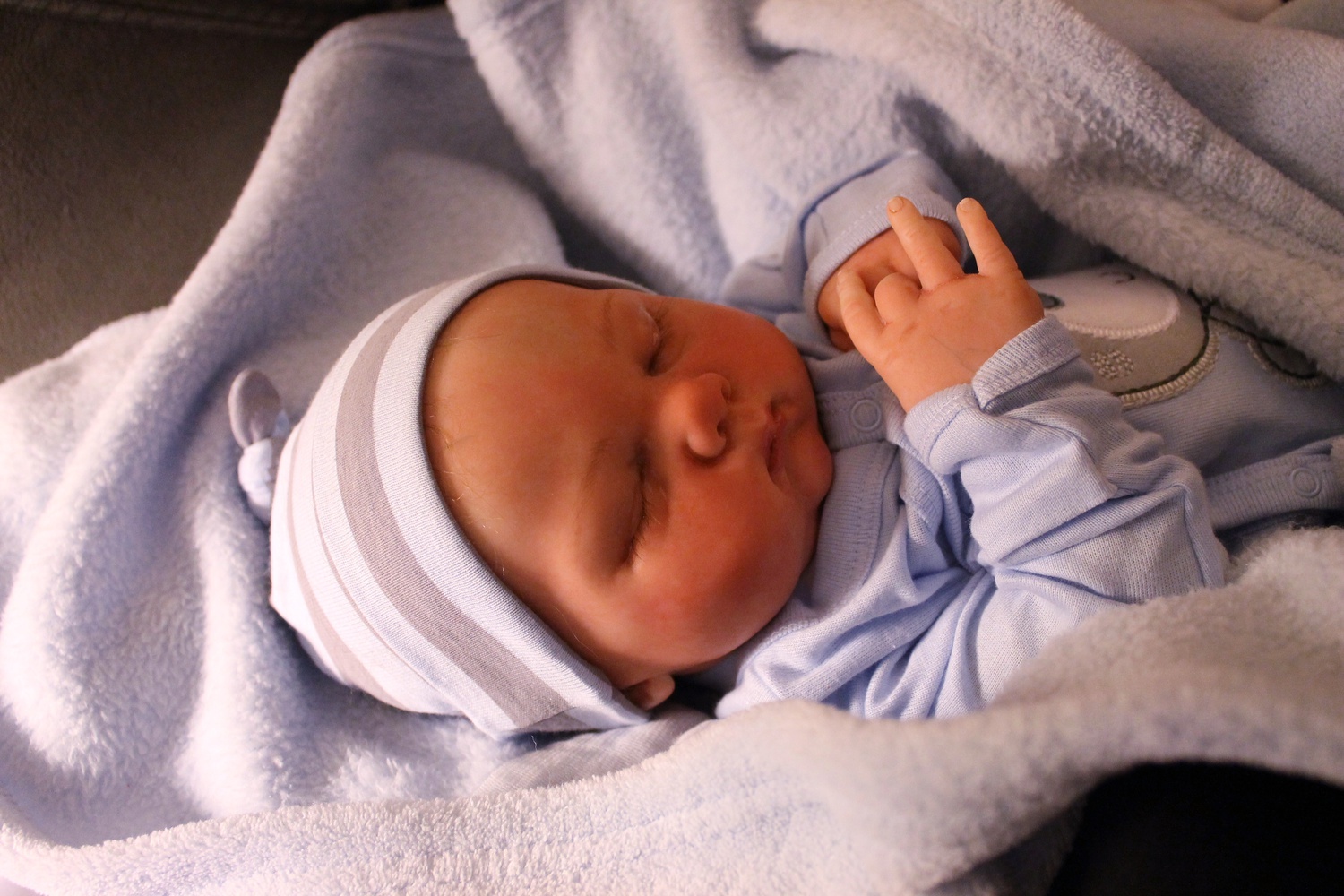 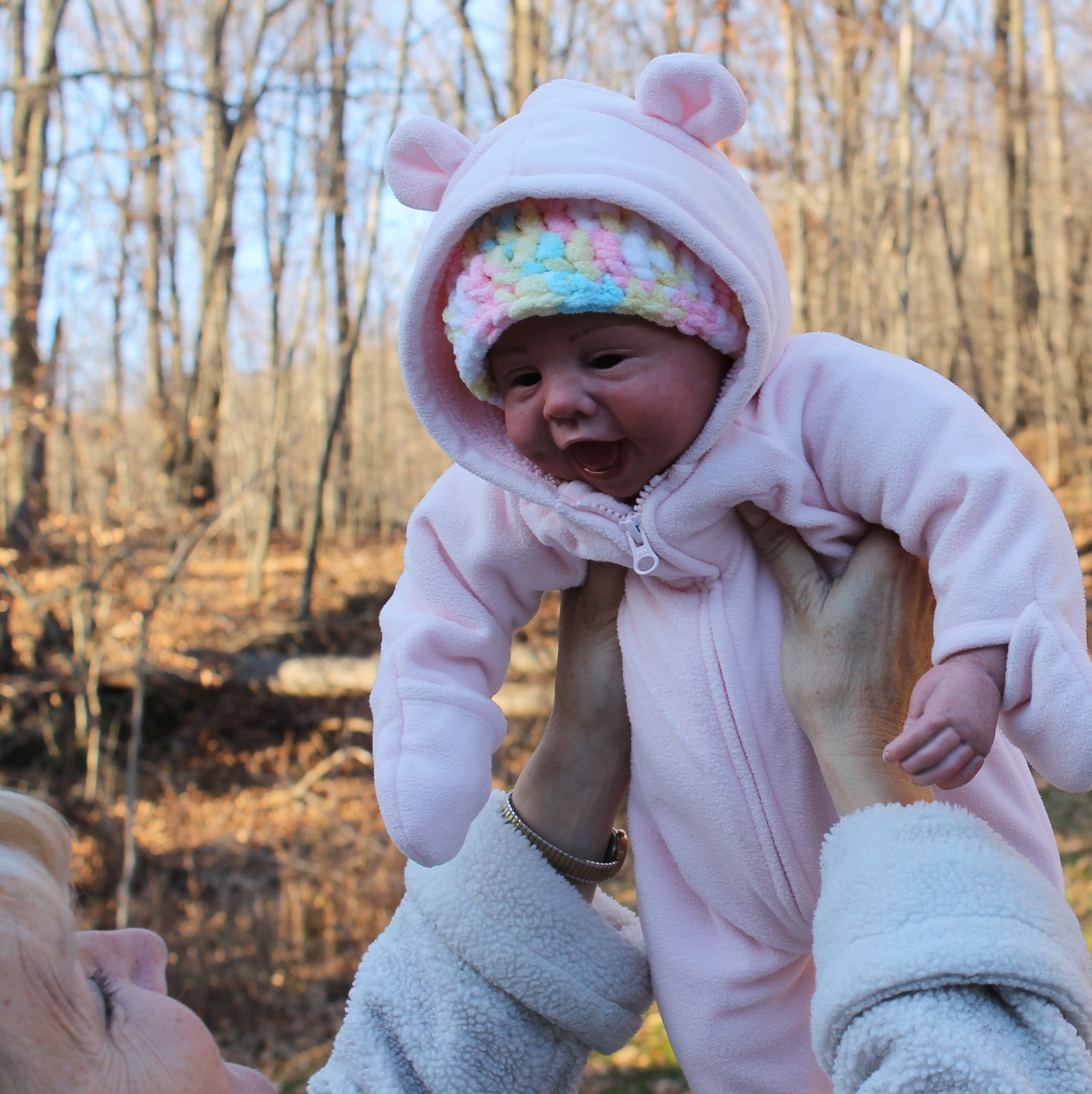 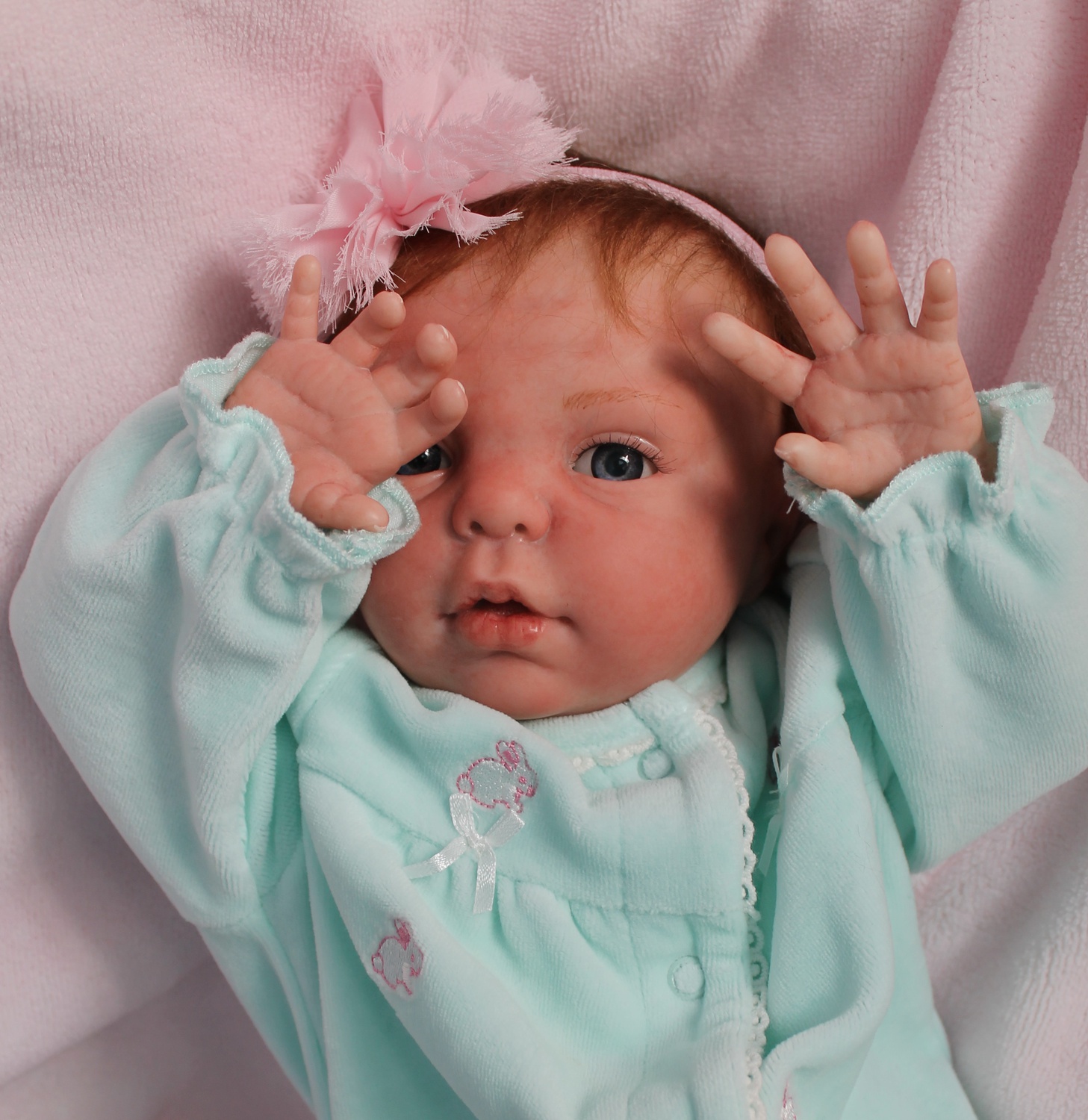 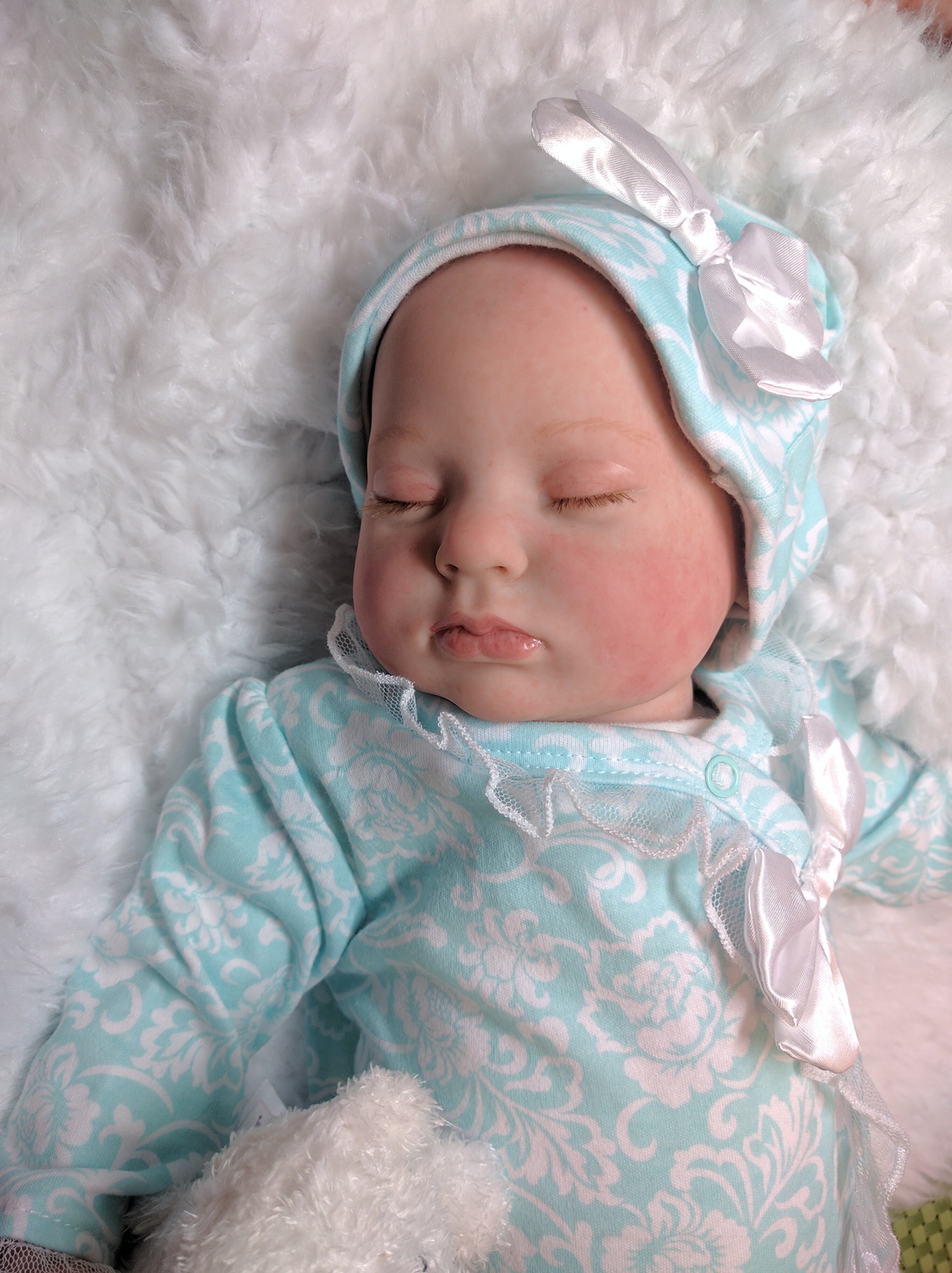 Uncanny Valley - The “Uncanny Valley,” a term first coined by robotics professor Masahiro Mori in 1970, refers to the discomfort experienced when encountering human replicas which appear almost, but not exactly, like human beings.
true

“We learned early on that with reborns, someone is always watching,” George explains. “No matter where you are.” Babies are attention magnets. People want to look at them, play with them, make faces at them, talk gibberish at them. Because they are so realistic, the same is true of the George and Crosier’s dolls. When the two sisters first took some reborns to a craft fair (they sell a lot of their dolls at festivals and other large public events), a woman approached George and began asking about how they work.

“I held up the doll and this woman asked me, ‘Well, do they move like a baby?’ And I held it up and moved it just like this,” George explains, gesturing her arms in a rough back-and-forth motion. “And this other woman comes shrieking up—she thought I was shaking the baby.” George assured the woman that the reborns were only dolls. Even after the stranger understood, she remained disturbed at the sight of something so life-like being tossed like a shake weight.

After that incident, George and Crosier made a pact to always handle the dolls as if they were real babies. Now, whenever Until Forever Nursery makes a sale, they give the buyer a “birth certificate,” which includes details about the doll—their name, their “date of birth,” and the stipulation that the reborn always be treated like an actual infant.

Back on the cold street in January, the sisters are worried that, without a baby blanket, they won’t be able to take the dolls outside—they would be breaking their own rule. In their free time, George and Crosier often parade the dolls around town. They go to restaurants, cafes or public spaces, usually to “freak people out” and pass out business cards to anyone who seems interested. This afternoon, the two are hoping to hit up a small bar called Madison’s Brewing Company. But the temperature is in the teens, even lower with windchill, and neither of them thought to bring extra cold weather gear.

“They’ll arrest us,” George says with a snicker. Her delivery suggests she’s kidding, but she isn’t. They have had run-ins with the police in the past. The sisters quickly devise a plan. They put off their lunch plans a little and pay a visit to a consignment shop called “Here We Grow.” Twenty minutes later, armed with new blankies and a couple extra onesies, the sisters are sitting at their regular table in Madison’s, dolls cradled in their laps, waiting to see who’ll bite.

George got the sisters into dollmaking—in part out of necessity (a single mother of two at 24, she had once sold dolls to make her house payment), in part because of the kind of obsessive drive which usually makes for excellent reality TV contestants. She is incapable of doing anything half-heartedly, but has charisma that makes it seem charming, not compulsive.

“When the kids were young, we got into breeding pedigreed rabbits,” George explains. “We ended up having 76 of them.” After the rabbits, George bought birds. She incubated eggs in her son’s room, and raised the hatchlings in her daughter’s room—occasionally the kids slept in the den to give the birds some peace.

“Soon, I had 61 birds in our backyard. We had chickens, geese, turkey, quail, pigeons, even emus—they were five and a half feet tall.” They also kept bantam and two African grey parrots with a habit of screeching obsceneties throughout the day. These were expensive hobbies, but George always made them pay off.

“Everything I’ve ever done has made a profit. I never would do anything that didn’t. That’s just how I am,” George says. “I always have to be able to make money.” So when her kids lost interest in their birds, she sold off the stock and turned back to her original money-maker: dolls.

When George returned to doll-making, Crosier followed suit. For several years, they made and sold different kinds of dolls. The business took off, in part because George is an expert. She reads doll blogs, goes to doll auctions (where she’s the first to arrive and last to leave), refurbishes antiques, collects just about every kind on the market (except American Girl, as she is quick to insist) and even several types that have gone out of production.

George had heard of reborns, but it didn’t occur to her to make them until, at her husband’s suggestion, she looked into how much they sell for. George and Crosier’s reborns typically cost a couple hundred dollars, but some (like the one Lt. Jason Short tried to resuscitate) can go for thousands. Usually, the expensive ones are made out of silicone, so they feel fleshy to the touch. Other luxury reborns have mechanical heart beats or artificial respiration. Comparatively, George and Crosier’s dolls are low-tech, but they still sell for nearly five times what regular dolls cost.

When you hear the prices of these dolls, it’s impossible not to wonder who, exactly is buying them. Reborns are not novelty gags you pick up at rest stops, or presents you buy for a niece. They are serious investments. To get one, you have to really want it.

George and Crosier sell and donate many of their dolls to nursing homes for residents with Alzheimer’s—people who may not have much human contact or aren’t well enough to hold a real child without putting it at risk. Occasionally, the sisters encounter customers who can’t or don’t have kids, and buy the dolls in their stead. One couple, who had recently learned they were infertile, sent Julie two pictures of themselves as babies and requested a doll to look like a blend of their faces.

But the vast majority of their customers are mothers, sometimes “empty nesters,” but often young mothers, who buy reborns for their children. If it strikes you as odd that a parent would shell out hundreds on a doll that looks exactly like a child for that child, you’re on the same page as George and Crosier—they don’t buy it.

“What I’ve come to find out,” George says, almost confidentially, “it seems that the kids aren’t even that interested in the dolls. I think that the mothers love them and use the kids as an excuse. That’s why they’re spending all that money.”

Whatever their reasoning, all the demographics share one thing: an intense, nearly parental affection for the reborns. But for every person who loves them, there are as many who find them deeply disgusting.

“No one feels neutral about reborns,” George says, “Everyone has a strong reaction.” These dolls tug at something visceral—some people find the illusion of an infant appealing, others are disturbed by being tricked.

“An infant can evoke the most powerful feelings in anyone, and mostly it’s good,” George says, mulling over the divisiveness of her dolls. “But when something which looks exactly like an infant isn’t—that could also be bad.”

What people often forget about the Uncanny Valley is that it is a valley. It has two sides. On one bank are those things which look like what they claim to be: the toasters, coffeemakers and everyday items people easily accept. Discomfort only arises after an object approximates human-ness and misses the mark. But there’s another side for the indistinguishable things, the ones we take for human. And that’s where some reborns live: almost real, but not.