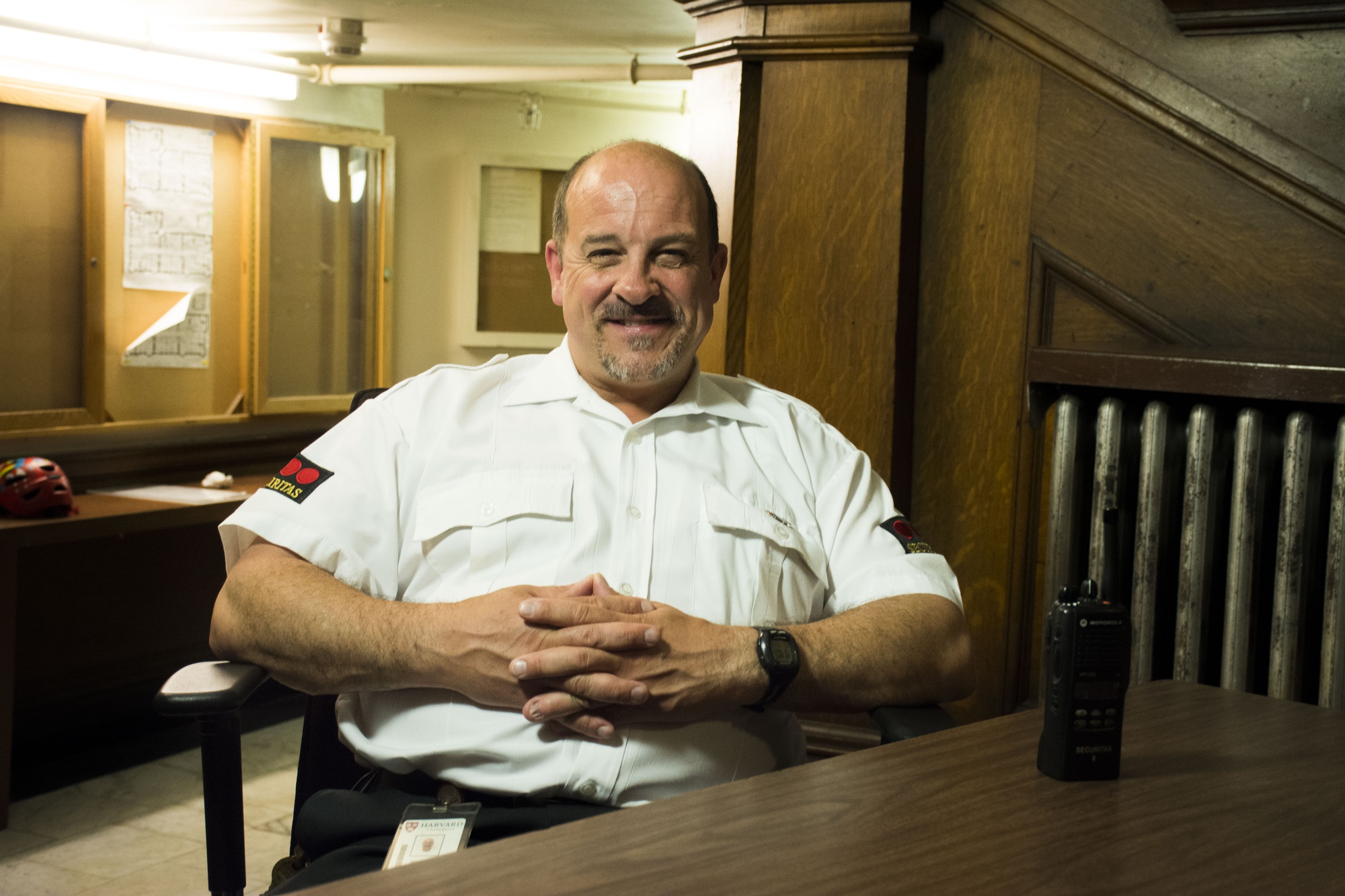 On the Lookout: Securitas

Oliverio says he can easily tell when a student has had a rough week. Spotting differences in moods and mannerisms is how he’s able to keep a lookout for the welfare of his “kids—I call them kids,” he says. “Sometimes they get offended when I call them that.”
By Valerie B. Elefante

Securitas guard Bill Oliverio traveled into Boston on Marathon Monday with his brother for the first time since the attack in 2013. That year, he recalls, he’d gone to Heartbreak Hill to cheer on three Harvard students he’d befriended from his post in Claverly Hall.

“We had three girls from here running it,” he says. “So I went in to see them. I had the tracker, and when they passed Heartbreak Hill, I was going to get on the train to go to the finish line to watch them come in, when all of a sudden motorcycle cops come by me way too fast to be anything other than a real, real emergency.”

His nephew, a police officer at Boston City Hall, called to warn him that there were reports of explosions at the finish line. Oliverio immediately called Adams Faculty Dean Sean Palfrey.

I approach the desk at the bottom of the stairwell in Claverly Hall where Oliverio is seated, shuffling through paperwork. He seems delighted to speak with me. Standing, he moves to find me a chair. He apologizes that there isn’t already one there.

“It’s really—excuse my language—pissing me off because twice this year I put a chair there,” Oliverio says. Then he softens. “It’s really the highlight of my shift, when people stop in.”

Oliverio brings down a chair from upstairs, and I sit down. He says he became interested in the security industry after retiring from his position as a radio technician for the Marine Corps. “It fit with what I was doing and was an easy transition,” he says.

He pauses to wave at a boy on his way outside. “Hey, Andrew!”

Oliverio works night shifts—which run from 4 p.m. to midnight and midnight to 8 a.m—as a Securitas guard in Adams House. Though long, shifts in Adams “aren’t that bad,” Oliverio maintains.

Earlier in his career, Oliverio occasionally worked the night shift in the Yard. “That’s the crappiest,” he laughs. “In the winter, sometimes it’s raining and there’s no place to hide. It’s like probation.” He seems contemplative. “But you go there. You do your time.”

Oliverio considers the night shift in Adams a chance to get to know the residents. One of the girls on the second floor of Claverly Hall is his “consultant” for advice on new movies and TV shows to watch. Sometimes, fellow Patriots and Red Sox fans stop by to discuss the scores of the recent games. Most people, he admits, talk about their schoolwork.

“I try to give these guys advice,” he says. “Not that I know anything about anything. But I see. We sit here, and we see these kids more than the Masters, more than the professors, more than the tutors. ‘Cause all I do is sit here and watch kids in and out all day long.”

Oliverio says he can easily tell when a student has had a rough week. Spotting differences in moods and mannerisms is how he’s able to keep a lookout for the welfare of his “kids—I call them kids,” he says. “Sometimes they get offended when I call them that.”

Oliverio stops mid-sentence to ask a boy walking with a crutch how he’s feeling. “Much better,” the boy says.

Oliverio explains that the boy came into Claverly Hall earlier in the week and asked if Oliverio knew where to get a pair of crutches. Oliverio immediately referred him to another student in the entryway recovering from knee surgery but using only one of his crutches. The students didn’t know each other—one lived on the second floor, the other on the fifth. But once Oliverio introduced them, the first boy was able to borrow the second boy’s extra crutch and walk with some of his weight off the injured foot.

“It’s little stuff like that,” Oliverio says. “Little to everyone else, but to that kid, it’s someone somewhere gives a shit—excuse my language, it’s Marine stuff. That’s how I feel comfortable. But if it gets out of hand, you let me know.”