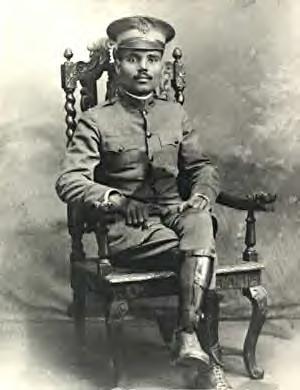 At the time, Campos’s “insurrectionary activity” piqued the interest of Crimson reporters because he had just been arrested for his alleged involvement in an assassination attempt on President Truman.
By Margaux R. E. Winter

“I live under tremendous pressure trying to free my country from Yankee imperialism,” Pedro Albizu Campos, Class of 1921, wrote in a 1931 letter to his college friend Lewis Gannett.

Campos was destined to become a nationalist and revolutionary for his home country of Puerto Rico. But before Campos became a central figure in the fight for Puerto Rican independence, he was a student at Harvard—one of the first from Puerto Rico ever to graduate from Harvard Law School.

The U.S. invaded and colonized Puerto Rico in 1898. Campos, who spoke eight languages, left his home country for Cambridge in 1913 as a translator. At Harvard, he also wrote for the Christian Science Monitor. In 1914, Campos left Harvard to fight in World War I for the 375th Infantry Regiment. In 1921, he returned to campus as a law student.

During his time in law school, Campos became president of the Cosmopolitan Club, a club designed to facilitate conversation between American students and foreign ones. A 1908 article in The Crimson said the club filled a “long-felt want,” as “the average foreigner” at Harvard was not usually encouraged to “approach his American classmates, whose ideas and ideals he [could not] altogether understand.”

Promptly after graduating from Harvard Law School, Campos moved back to his hometown of Ponce, Puerto Rico. Impassioned by his time at Harvard, Campos used his law degree to defend the working class. In 1924, Campos joined the Nationalist Party (PNP). Soon after, the man who had felt “tremendous pressure” to liberate Puerto Rico was acting as the party’s president.

After returning to Puerto Rico, Campos reconnected with Gannett—their friendship is well-documented in the Harvard University Archives. In what is now a fragmented letter, Gannett wrote of U.S.-Puerto Rico relations, “Dear Pete: Do you have any friends up here to whom you occasionally write [your] side of the stories we read about so frequently in the newspaper? If you ever do, I’d like to see a carbon. For I feel very much [out] of touch, and puzzled.”

Gannett wrote that he had “only the warmest and most affectionate memories” of Campos. The revolutionary recalled the “warmth, sincerity, and love that pervaded the extraordinary gatherings at the Gannet hearth.”

Campos’s involvement in the Puerto Rican independence struggle picked up speed in the early 1930’s. A Crimson article from 1950 said the revolutionary “had never been an active alumnus” of Harvard. He had missed his 25th Law School Reunion in 1941 because he was serving a sentence in Atlanta Penitentiary. At the time, Campos’s “insurrectionary activity” piqued the interest of Crimson reporters because he had just been arrested for his alleged involvement in an assassination attempt on President Truman.

Four years later, Campos was making headlines in Cambridge once again, after four Puerto Rican nationalists opened fire on the House of Representatives chamber in Washington. Campos said it was an act of “sublime heroism.” A few days later, Campos and several other Puerto Rican revolutionaries were detained.

During Campos’s time in prison, Gannett worked with the ACLU and friends of Campos, including Filiberto Vázquez and Ruth M. Reynolds, to pardon him from imprisonment.

Despite their best efforts, a 1955 letter to Gannett from Reynolds states that “during the past 21 months [Campos] has been held in solitary confinement, having been returned to prison without an indictment after four Nationalists [Campos not among them] fired upon the United States House of Representatives.” He reported that Campos was incapable of digesting his prison rations or standing up without crutches, and his health only continued to decline. He was pardoned by Governor Marin in 1964 and died a few months later.

Although Campos was severely ill during his final days, he remained a spirit for Puerto Rican independence and human rights even after death. He lived by nationalistic ideals and rejected what he saw as false universalism. In his own words: “I am not one of those that say: ‘I am not nationalistic because I am an internationalist, because I love humanity.’ That man who says that he loves humanity is killing his Puerto Rican brother. Charity begins at home. The one who loves his own people, loves his neighbor. The one who does not love his own people, does not love his neighbor. He is an hypocrite.”