Over an 18-year period stretching from 1995 to 2013, Asian-American students admitted to Harvard scored higher on the SAT than did their peer admits from other racial groups, according to data released in the admissions trial.
By Shera S. Avi-Yonah and Molly C. McCafferty 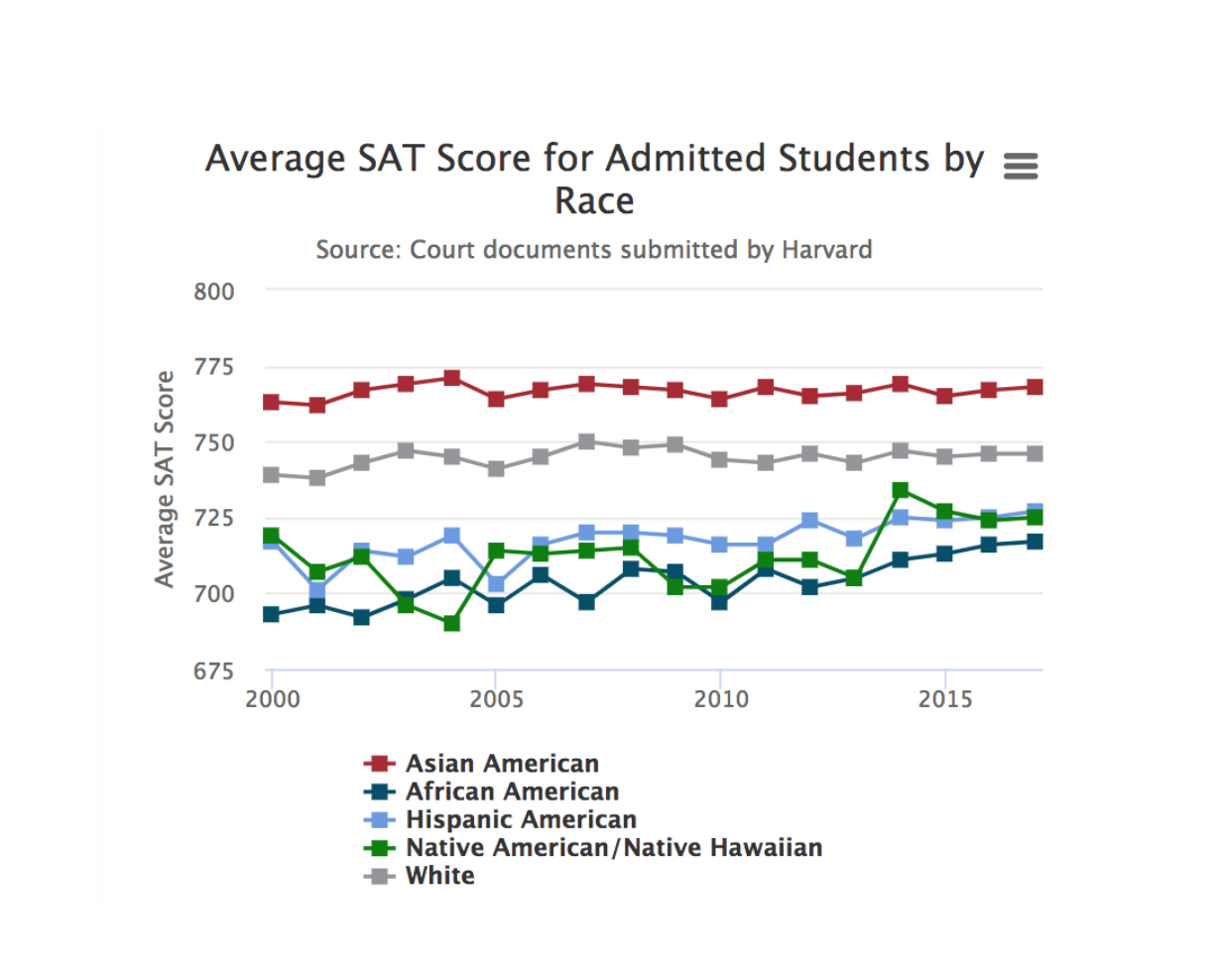 Over an 18-year period stretching from 1995 to 2013, Asian-American students admitted to Harvard scored higher on the SAT than did their peer admits from other racial groups, according to data released in the admissions trial last week.

A Crimson analysis of the previously confidential dataset — which spans admissions cycles starting with the Class of 2000 and ends with the cycle for the Class of 2017 — revealed that Asian-Americans admitted to Harvard earned an average SAT score of 767 across all sections. Every section of the SAT has a maximum score of 800.

Harvard’s lead lawyer William F. Lee ’72 presented data on the demographic breakdown of applicants and admits’ SAT scores as part of his questioning of Dean of Admissions William R. Fitzsimmons ’67. Lee’s quizzing of Fitzsimmons on Oct. 18 marked the fourth day of the high-profile trial and the last day of the long-serving dean’s marathon testimony.

The case, which could decide the fate of affirmative action in the United States, kicked off four years ago when anti-affirmative action advocacy group Students for Fair Admissions sued Harvard over allegations it discriminates against Asian-American applicants. The suit went to trial on Oct. 15 in the John Joseph Moakley United States Courthouse in Boston.

Duke economist Peter S. Arcidiacono, whom SFFA retained as an expert witness, wrote in a pre-trial report that, “by controlling for test scores, one can show that [Asian-Americans applicants were] being held to a higher standard than [other applicants], all else equal.”

Harvard and its supporters disagree, arguing the SAT is an imperfect way to measure a candidate’s worth. More than 20 campus student groups filed an amicus brief in July criticizing “SFFA’s erroneous assumption that test scores are a valid and reliable indicator of merit.”

In their own pre-trial filings, University lawyers wrote it would be impossible for the school to rely on SAT scores alone — too many Harvard hopefuls earn perfect marks each year. The attorneys noted that, of the 26,000 American applicants to the Class of 2019, roughly 3,500 had perfect SAT math scores, 2,700 had perfect SAT verbal scores, and nearly 1,000 earned a perfect overall score on the SAT or ACT. Typically, admitted Harvard classes number around 1,700 students.

“The Harvard applicant pool is overwhelmingly strong on all dimensions,” school lawyers wrote in a June court filing. “Given the extraordinary pool of applicants, many of whom have the ability to succeed academically at Harvard, the admissions process is designed to identify those students who manifest the qualities, academic and otherwise, that suggest they will become engaged participants and leaders in an increasingly diverse, complex society.”

The data that emerged Oct. 18 separately aggregates scores for three groups of students: applicants, admits, and students who ultimately matriculated at Harvard. The dataset — which appears to be sourced from internal Harvard records — breaks down College applicants into eight categories: white, Asian-American, African-American, Hispanic-American, Native-American/Native-Hawaiian, international citizen, “Other,” and “Unknown.”

Scores for white, Asian-American, African-American, and Hispanic-American admits remained largely consistent over the time period tracked. Scores for Native-American and Native-Hawaiian students fluctuated more widely, likely a reflection of the fact that these students typically make up a very small percentage of Harvard’s student body.

On average, 4,910 Asian Americans, 1,938 African Americans, 2,082 Hispanic Americans, 8,685 white students, and 233 Native-American and Native-Hawaiian students applied to Harvard in any given year included in the dataset.

The trial is set to continue Monday morning.