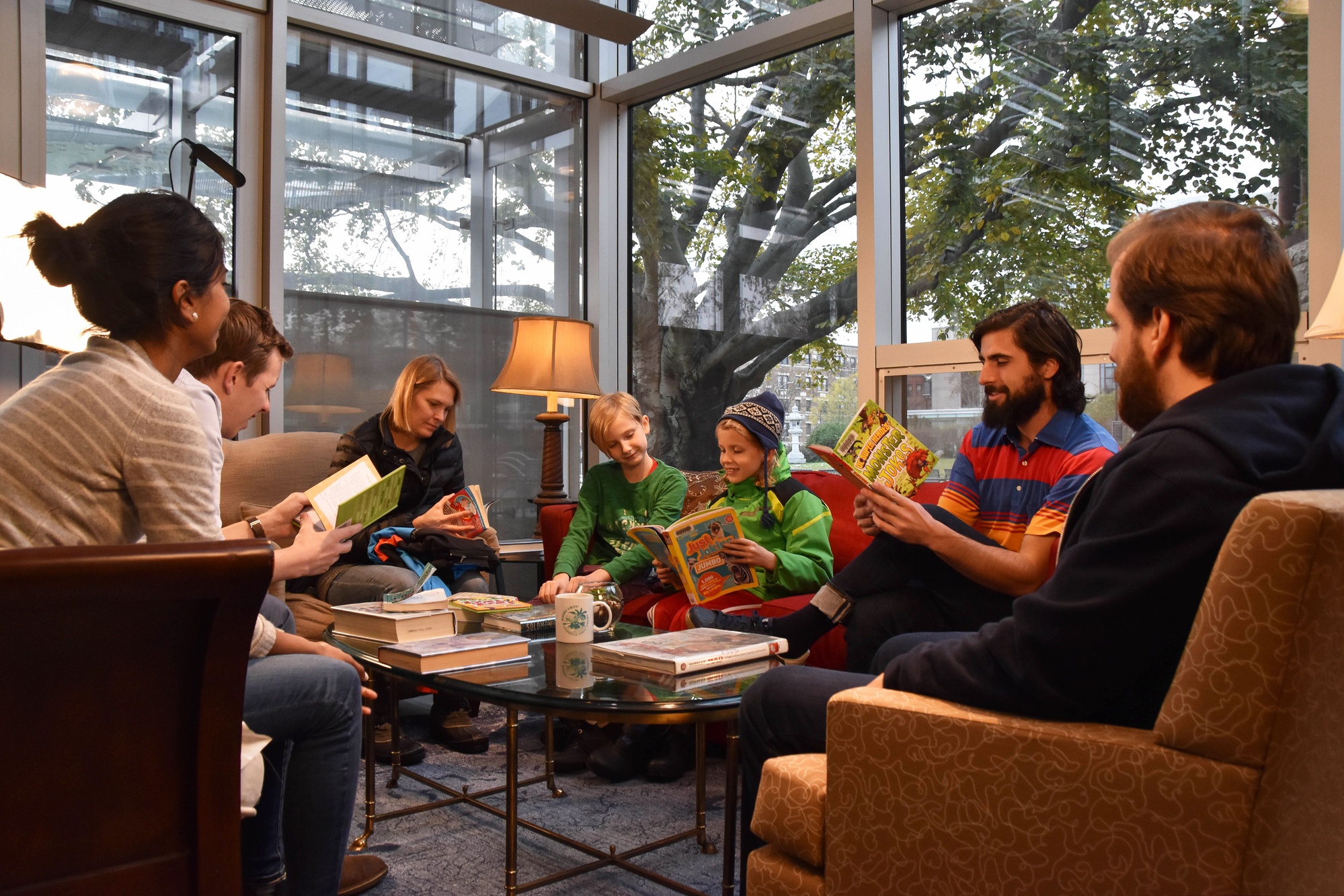 Cambridge residents try out The Laughing Room in the lobby of the Cambridge Public Library. By Quinn G. Perini
Advertisement
Advertisement

Sometimes, the room laughs when no one tells a joke. Other times it remains dead silent after a punchline.
By Letitia C. Chan

It’s an hour before closing time on a Sunday but the line for the Laughing Room still extends past the door and wraps around the lobby of the Cambridge Public Library. The space is an interactive art installation powered by artificial intelligence, and it’s connected to an algorithm that plays a laugh track whenever the room finds visitors’ jokes funny. The Laughing Room has clear criteria for a good joke: it uses an algorithm based on a dataset of stand-up comedy.

A laptop with the machine’s algorithm displays, in code, the sentences the machine understands and the percentage of humor awarded to each sentence. More than 50 percent “funniness” on the meter solicits varying intensities of laughter. If the room truly loves your sense of humor, you are rewarded with applause on top of a thunderous roar.

Sometimes, the room laughs when no one tells a joke. Other times it remains dead silent after a punchline.

The installation space resembles a living room sitcom set — there are lamps, flowers, and red and beige couches situated around a coffee table of joke books. It is cozy, brightly lit, and abuzz with visitors (the room has not been empty for one minute of its three-day run). On the other side of the room, production lights and cameras face the set. The Control Room in the MIT Hayden Library plays a live stream of the footage.

Jonny F. Sun, humorist and author, created the Laughing Room. Sun published the book “everyone’s a aliebn when ur a aliebn too” in 2017, born of his own Twitter jokes, which quickly gained a massive following.

Sun says he was inspired by his Ph.D. work and how people curate their content on social media. “I got interested in the idea of identity and social performance online,” Sun says. “I was thinking a lot about the algorithms that are sort of an underlying invisible hand, slowly shaping and changing the ways we communicate and talk to each other.”

The Laughing Room also derives from Sun’s love of theater, stand-up, and TV. “I got really into the idea of the laugh track because it’s a strange thing that is so artificial in a way, but also suggests a realness,” Sun says.

Social anxiety played a role, too: Sun says he wanted to “create a simulated audience to follow me around and laugh at my jokes… without actually having to be in front of people.”

To complete the project, Sun collaborated with Hannah E. Davis, a machine learning artist and researcher. Davis’s other projects include translating books into music based on emotion and creating an AI-generated symphony, which played at the Louvre. For the Laughing Room, Davis says they considered using other technological methods, but settled on using the transcripts of comedians to train their machine in timing, syllables, and repetition.

Nikhil K. Dharmaraj, a high school senior from California who worked on the project with Davis and Sun over the summer, explains the algorithm as a neural network capable of analyzing “syntactical structures of a sentence. It has been trained on a huge corpus of late night stand up specials,” he says. “It classifies every sentence into either set up or punchline.” If the room deems the punchline worthy, a laugh track ensues.

Matthew Battles, the Associate Director of metaLAB at Harvard, the incubation place for Sun’s project, sees the machine learning process as obscure. “What’s curious is the rules that emerge out of this evolutionary process are a blackbox to us. We can’t get in there and see specifically what the algorithm is responding to.”

Teaching the Laughing Room what “funny” means requires a series of intentional choices. “What you feed into the model is what it understands in terms of values,” Davis says. “We definitely wanted it to not be misogynistic or racist, so the data set [consists of] only women comedians and people of color.”

“We wanted to think about comedy as a set of people and performers that is incredibly diverse and intersectional,” Sun says. “It was a way for us to sort of, at least in a little way, filter out or undo what is traditionally a very white, male system.”

Though Sun’s creation centers around laughter, he does not think the social role of artificial intelligence should be viewed entirely in a positive light. “I think the flip side of the fun, positive environment is… The terrible things [AI] is actually doing — which is mining data, collecting your information, surveilling you 24/7,” Sun says.

Beyond the public library’s connection to Harvard metaLAB, the location was perfect: the library is accessible to everyone. “There’s something very public about libraries that is different from galleries and more closed off institutions,” Sun says. Reinhard Engels, the Manager of Innovation and Technology at the Cambridge Public Library, says this is the first art exhibit the library has ever hosted. He adds the installation formed a much more fascinating way of bringing to attention the issue of AI than the tech Ted talks he originally had in mind. It’s “how we as a library can fit into this intellectual ecosphere,” he says.

After this three-day run, the Laughing Room will return to Cambridge and MIT in May 2019. “We have a lot of visions for this,” Davis says. The team looks forward to bringing it to more people and locations, and integrating more features into future algorithms.

The Laughing Room has a very specific personality. It is capricious and difficult to impress, but it can also be very generous at times. When I walked into my room, I brought with me some of my crudest jokes, which garnered no laughs. I realized that the Laughing Room is a thoroughly wholesome character. Dharmaraj says the the machine blacklists words that some might deem offensive or politically incorrect.

The laugh track playing by itself in the middle of someone’s sentence is humorous in and of itself. The cold lack of response is its own joke, as in sitcoms. The Laughing Room’s silence, in its nonchalance, seems less like an inaccuracy in detection than a personality come to life.