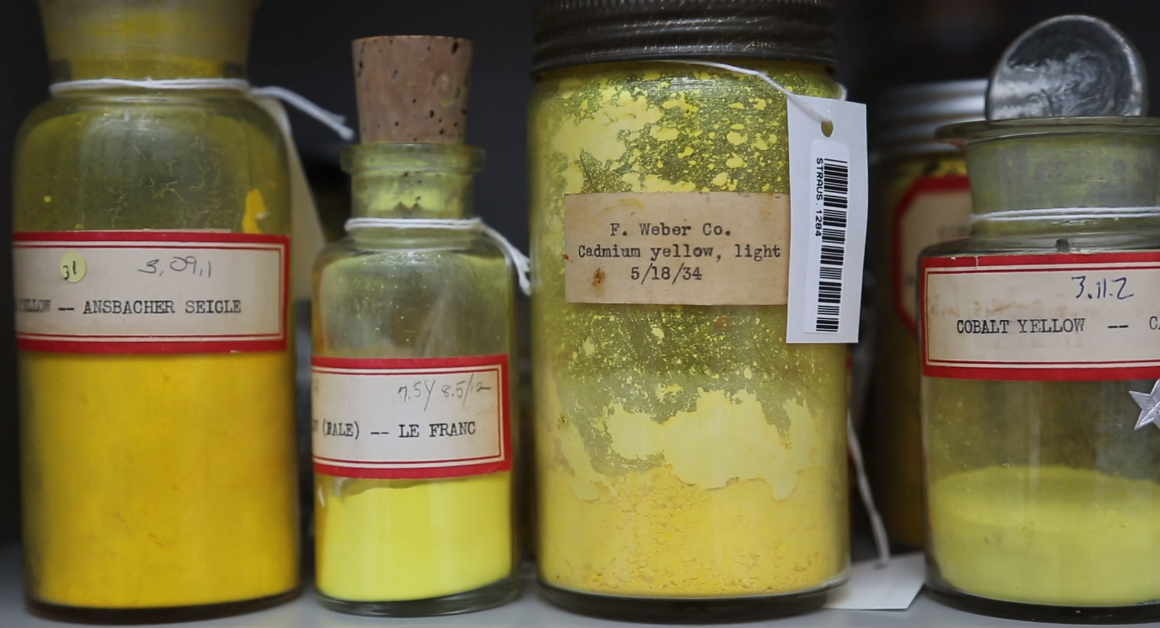 Cadmium yellow and other sunny shades populate a portion of the Forbes pigment collection.
Advertisement
Advertisement

Pink is "not historically a color.”
By Olivia G. Oldham and Margaux R. E. Winter

What is the color of dragon blood? A dark, dusty red, at least according to the archives of the Forbes Pigment Collection. The legendary pigment was purportedly gathered from dragon wounds in the Middle Ages; more accurately, its color comes from tree resin. Conservation scientists at the Collection work to unlock the mystery of this centuries-old pigment, along with many other mystical colors.

Over the past few years, the Forbes Pigment Collection, housed at the Harvard Art Museums, has attracted a significant amount of attention. Held in a staff-only area of the museum, it can be viewed across the courtyard from the museum’s fourth floor. Enclosed by floor-to-ceiling windows, the pigment collection calls home a wall of cabinets installed during a 2014 renovation of the museum.

The collection — arranged according to the exploded color wheel — is striking. Edward Waldo Forbes started the collection in the early 1920s, and made it official in 1928. Originally, Forbes sought to create the pigment collection after purchasing a damaged Renaissance painting of the virgin and child. Hoping to restore the painting to its original brilliance, Forbes realized that he needed to understand the materials he was working with — and so the pigment collection was born.

“The function of the pigment collection really hasn’t changed. It’s the same thing that it was for Forbes: it’s a set of analytical standards that are used to study and to help understand art and art making,” says Alison M. Cariens, the conservation coordinator for the Harvard Art museums.

While the pigment collection may have ties to ancient history, the Harvard Art Museums and Straus Center for Conservation and Technical Studies are dedicated to putting the collection to use in the present day. The collection is continually updated, and over the past few years, colors such as Surrey NanoSystems’s Vantablack (of which Anish Kapoor famously boasts sole artistic ownership) and Stuart Semple’s “pinkest pink” have been added.

It’s a popular misconception that the collection is primarily used for artmaking. Although the Straus Center conservators do significant work to repair and preserve their paintings via art conservation, the pigments are never directly added to a canvas. “We would never use them in conservation, because we want what our conservators do to be distinct,” Cariens says. “Scientifically, visually. It’s not ethical to pretend that you are Van Gogh, because you’re not.”

While its contents are never directly applied to canvases, the pigment collection’s principal aim is to facilitate art conservation. It actually spurred the hire of the first conservation scientists in the United States. And it forms a critical source of information when dissecting the history of any painting: “The pigment collection informs a lot of what we do that isn’t treatment-based. It informs the way that we are able to teach... It informs a lot of outside research, and a lot of the research we are doing here,” says Anne D. Schaffer, paintings conservation fellow at the Straus Center for Conservation and Technical Studies.

Sometimes, experts have used the collection to evaluate the legitimacy of a painting's attribution to any one artist. By analyzing the chemical makeup of the pigments used in a painting and comparing them to the known standards of the Forbes collection, analysts can determine whether the colors used would have been available to a specific artist during their lifetime, or if a pigment would be available in the region from which the painting is believed to have originated.

One example is a painting purportedly by Jackson Pollock that went on the market a few years ago. “Everything aligned really well, like connoisseurship. Curators were saying this looks like it could be his stuff,” Cariens says. “But this lab ran tests of the pigments that were used, using these as a standard, and discovered that the red that was used was not available in art-making materials until 20 years after Jackson Pollock had died.”

Some also consult the collection when classifying pigments. Sometimes the names are hard to distinguish — for instance, there are a dozen varieties of cerulean — while others are as eclectic as jelly bean flavors. According to Cariens, for instance, pink is “not historically a color,” but rather “the only color that only exists in our mind”: a reflection from each end of the visible light spectrum. The human eye takes in both red and violet or blue wavelengths and combines them. To name the color allows us to employ it — in our paintings, and, consequently, in conservation.

Next time you find yourself in the lobby of the Harvard Art Museums, look up. You’ll find a kaleidoscope of color, each vial encapsulating a history of encounters between art and science.

A previous version of this article incorrectly stated the building's lobby is a part of the Fogg Museum. In fact, the lobby is central to all three of the museums that comprise the Harvard Art Museums, not just the Fogg.

A previous version of this article misspelled the name of the Straus Center for Conservation and Technical Studies.

A previous version of this article misquoted Alison M. Cariens as saying "conservationists." Instead, she said, "conservators."

A previous version of this article incorrectly stated the Harvard Art Museums do significant work to repair and preserve their paintings. In fact, Straus Center conservators do this work.