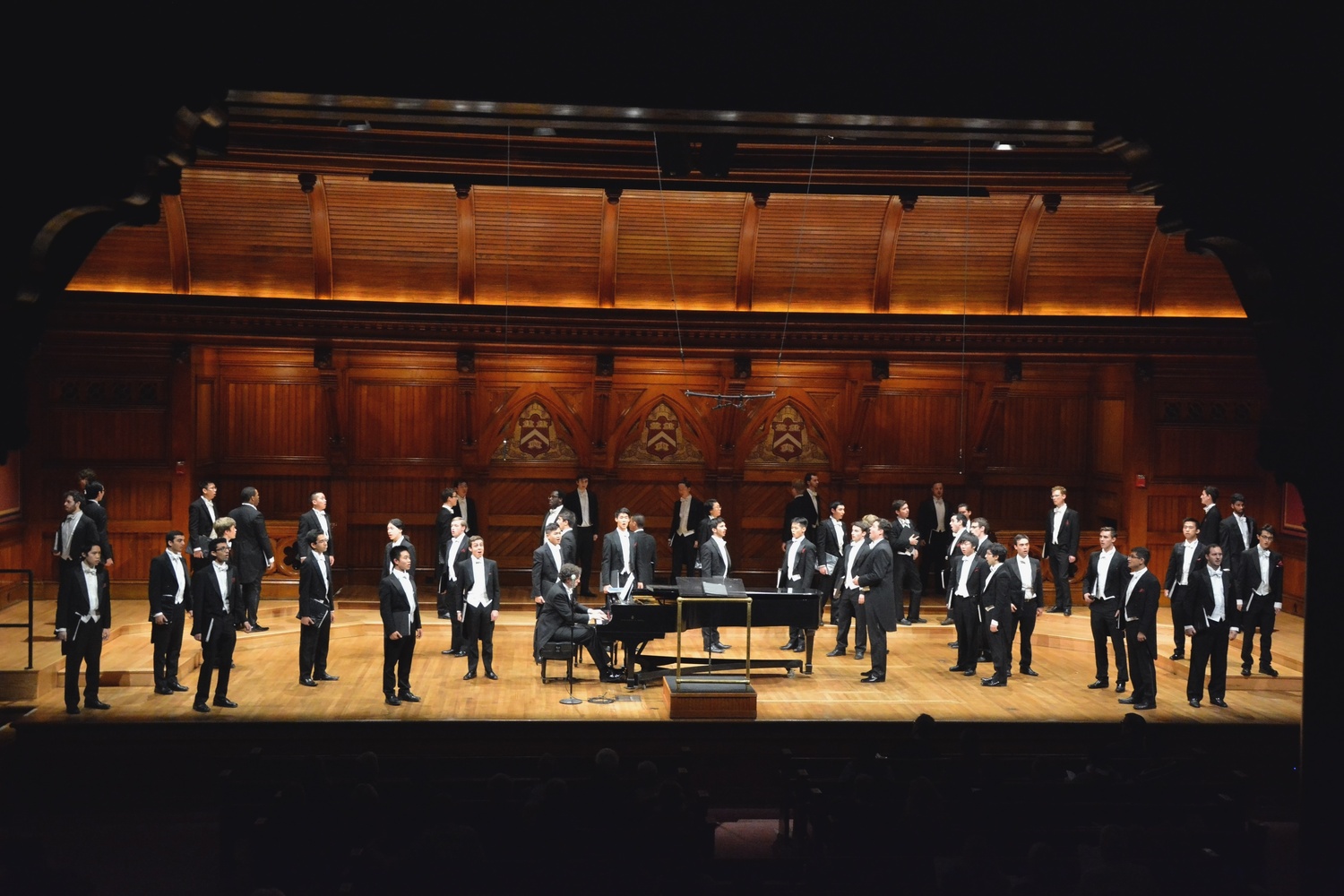 The Harvard Glee Club, one of the Harvard groups formerly directed by Jim Marvin, performs in Sanders Theatre. By Suuba M. Demby
By Jane Z. Li and Oliver L. Riskin-Kutz

Jameson “Jim” N. Marvin, who directed the Harvard choirs from 1978 to 2010, opened his final season with the Jameson Singers choir, consisting of Harvard alumni and Boston residents, last Saturday.

Before founding the Jameson Singers in 2010, Marvin led the Collegium, Glee Club, and Radcliffe Choral Society performance groups, directing thousands of student musicians in his several years at Harvard. From 1978-2010, he was also a senior lecturer in the Music Department.

Choral conducting, which Marvin refers to as "waving his arms," has been “a life-living of great reward and enrichment,” he said.

Marvin was known for rigorous ear-training and strict policy on tardiness by his singers, many of whom said he developed Harvard’s choirs into prestigious ensembles.

Indeed, Marvin said one of his proudest accomplishments from his time at Harvard was turning the Harvard choruses into a nationally recognized program. “When I got to Harvard, the choral society was sort of limping along,” he said. But after a few years of touring and performing at national choral conferences, Marvin said the Harvard groups became more widely known and admired.

“He's just a master of choral conducting, a master at creating a sound, a choral sound that is rich and blended and beautifully in tune and musical,” McCarty said. “The musical experience of singing with Jim is really truly extraordinary.”

Kelly M. Flynn ’91, the former president of Collegium, concurred. She said even though she “never had a great vocal apparatus per se,” Marvin still included her in the choruses and worked with her to train her voice. “It was about pursuing perfection,” she added.

Flynn, who had a lisp, said the dictation training she received “liberated” her.

“I learned to talk around my lisp, and that was totally from Jim,” she said.

Marvin’s former students recall his presence beyond rehearsal, too. Flynn recounted his “silliness” at post-concert dances, where he joined the undergraduates on the dance floor by imitating household chores.

“I never really knew whether Jim couldn't actually dance or he just wanted to be silly,” Flynn said.

Lisa Rucinski, the current president of the Jameson Singers, said singing under Marvin was “just seamless, there's no separation, it's like we are his instrument and he is playing us expressively.”

Recalling his time at Harvard, Marvin said he was proud of his legacy.

“I had an impact on a lot of these students, and that I’m so proud of. It means so much to me,” he said.

After over forty years of choral directing, Marvin will rest his arms after the choir’s last concert in May. He will be succeeded by Kevin C. Leong, the current assistant conductor of the Jameson Singers.