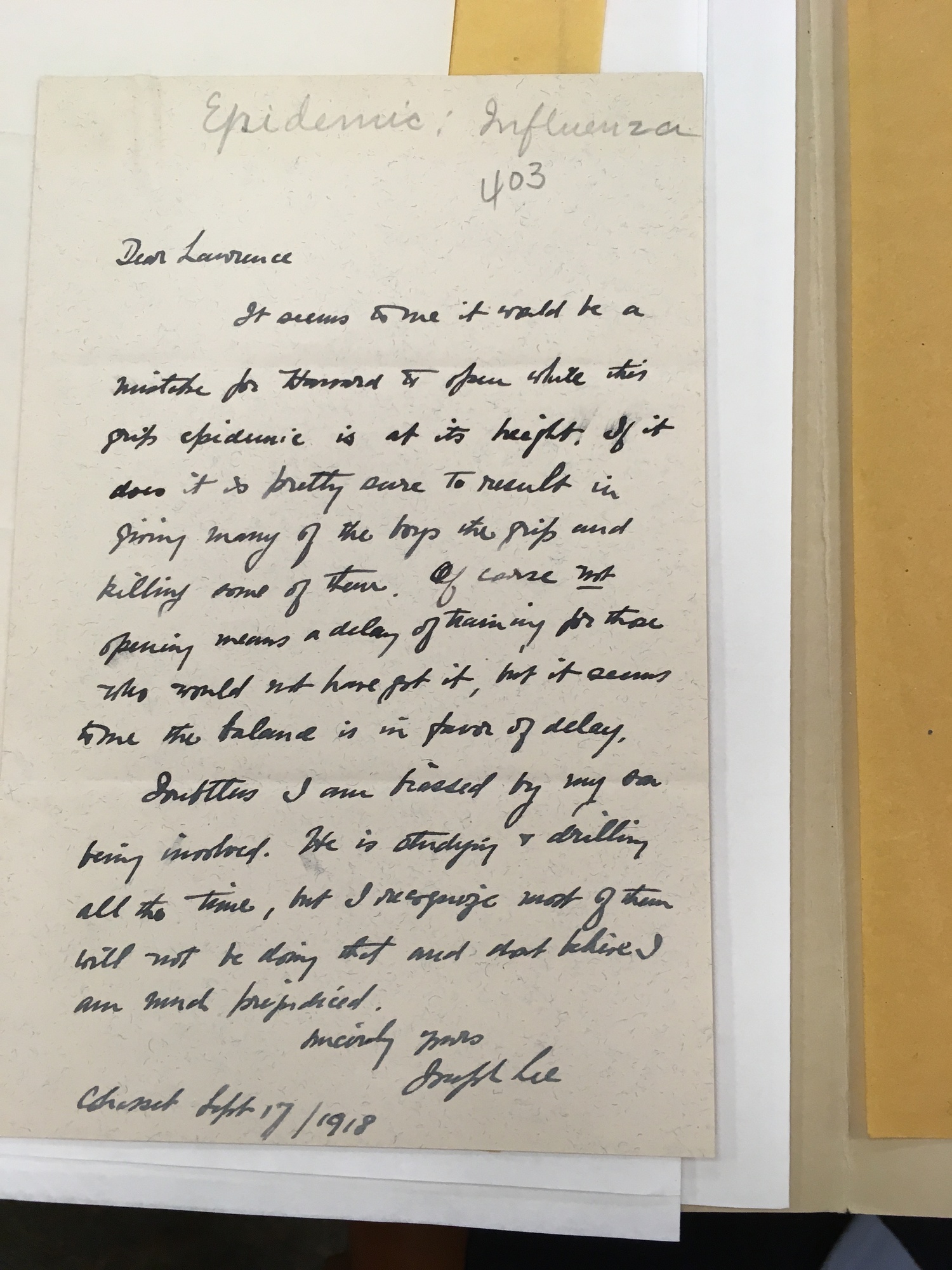 President Lowell knew he had a hard decision to make—one that would set a precedent for other institutions of higher education. He could either heed the warnings of doctors across the country or risk the health of his students.
By Margaux R. E. Winter

This year marks the 100-year anniversary of one of the deadliest health disasters in the history of the world: the Spanish Influenza. The immensely virulent disease infected 500 million people and killed 50 million worldwide.

While some other schools— including Radcliffe College— chose to send students back home until the epidemic had passed, President Abbott Lawrence Lowell made the controversial decision to keep classes in session in 1918.

In the words of one contemporary article in The Harvard Illustrated magazine, “The authorities here and elsewhere have deemed the effects of the epidemic to be of so alarming a nature as to warrant the closing of theatres, moving-picture houses, and the like, and the prohibition of public meeting of every kind… It is under these circumstances that Harvard University keeps open its doors.”

President Lowell knew he had a hard decision to make—one that would set a precedent for other institutions of higher education. He could either heed the warnings of doctors across the country or risk the health of his students.

On Sept. 18, 1918, Lowell wrote to his friend and colleague Joseph Lee, class of 1883, about his predicament. In his letter, Lowell said, “I have been talking over the question of opening with some of our medical experts. Doctor Christian felt as you do, that we had better postpone the opening. On the other hand, Doctor Rosenau... thinks it would be a mistake for us not to open on time; that as the epidemic has spread all over the country, there would be no increased exposure from bringing the students here.” Though Lowell clearly favored a prompt opening of the college, he was also open to opposition.

While Lowell deliberated, students grew aggravated. Under the letterhead of The Harvard Illustrated, Charles F. Zukoski Jr., class of 1919, declared his deep disappointment in Lowell’s inaction. Dissatisfied, on September 30th, Zukoski wrote to President Lowell, concerned that Harvard’s only preemptive action was to cancel larger lectures. Zukoski was unsatisfied with anything less than a complete closure of the institution.

In his reply, Lowell wrote, “On the question of postponing the opening of the University, Dr. Rosenau, our professor of public health, Dr. Balley, the college physician, and Dr. Kelley, the superintendent of public health in the state of Massachusetts, all thought it better not to postpone it… I write you all this because if you have not faith that the college authorities would of course act under the best advice I want you to know that they have done do.” Lowell did not mention the several detractors who advised that Harvard College be closed. His letter suggests the decision to open the school was unanimously recommended by medical experts.

Displeased with the public dissent, President Lowell considered prohibiting the Student Army Training Corps men from participating in college papers, a blow that would severely diminish staff numbers on various publications. In good humor, Zukoski replied, “We have not lost faith in the College authorities nor do we doubt in the least that they are acting as best they can. At Harvard we have learned, however, to temper faith with reason.” Lowell never responded.

In October 1918, the health of the student body took a turn for the worse: there were 60 cases of Influenza at the College’s Stillman Infirmary. By January, five students were reported dead. In a last-ditch effort to liberate his school from the grip of the flu, a desperate President Lowell demanded that anyone who sneezed or coughed during lectures be quarantined; 50 of the gravest offenders were detained and watched until further notice.

One campus over, Radcliffe College learned from Lowell’s unyielding stance.

On Oct. 7, 1918, the Radcliffe News reported, “the successful results of the week of suspension are the best proof of the wisdom of the decision of the Academic Board.” After a brief, yet much needed recess, the 27 ill students at Radcliffe college were all reportedly recovered and back to full health.

Even after classes resumed, Radcliffe continued to take precautionary measures, like preventing large gatherings of students and providing extra time for students to rest. The student body appeared to respond well to the administration’s more cautious policies. One student noted, “With the prevalence of gripp and influenza… there is something strangely disturbing and unconvincing in the aesthetic cavartings of a modern maid in the chilling night air.”

A century later, the reasons for President Lowell’s choice to keep Harvard’s activities in full swing remain a bit of a mystery. Though Lowell’s staunch refusal to consider a closure of the school was a point of immense controversy among Harvard and Radcliffe students alike, optimism still found its way to the surface of student outcry. In October of 1918, one Radcliffe student wrote, “the proverbial ounce of prevention is still worth its weight, and with perhaps a little more than ordinary care, we who have just returned from a long vacation, should have no fear.”