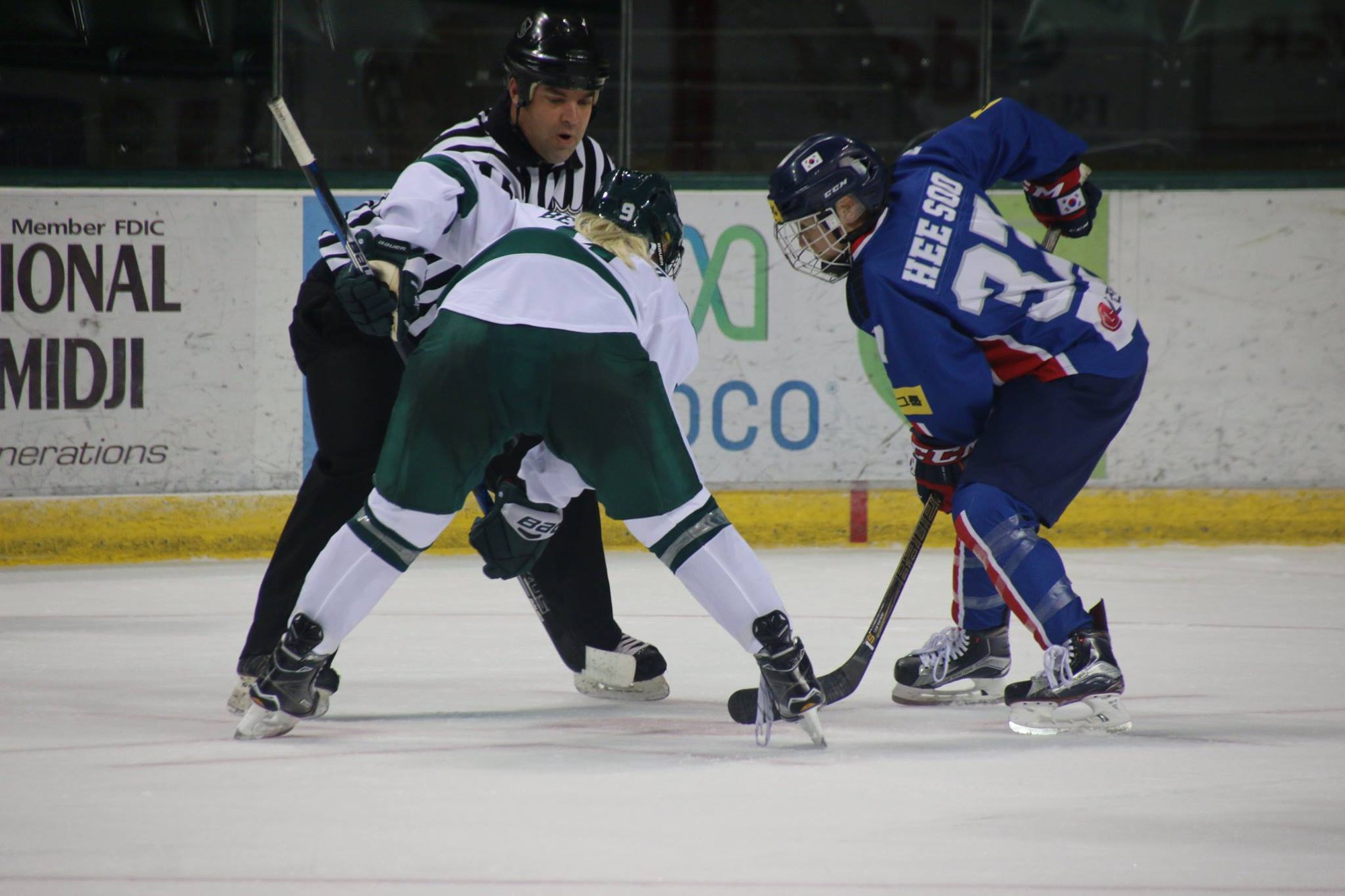 Fifteen Minutes caught up with Randi H. Griffin '10 in the midst of her preparation for the upcoming Olympic games in PyeongChang, where she will be playing for the unified Korean team.
By Devin B. Srivastava

For Randi H. Griffin ’10, the dream of representing her country at the Olympics is now becoming reality. Eight years ago, Griffin was a forward on the Harvard women’s ice hockey team. Now, Griffin, a 29-year-old American whose mother is South Korean, will be playing on the Unified Korean Olympic women’s hockey team. Comprising 12 North Koreans and 23 South Koreans, this team is historic—the first combined Korean team to compete in one sport at the Olympics. After her stint in the Olympics, Griffin will be finishing up her Ph.D. in Evolutionary Anthropology at Duke University, which she began pursuing in 2013. Fifteen Minutes caught up with Griffin, an Apex, N.C. native, in the midst of her preparation for the upcoming Olympic games in PyeongChang.

Editor’s Note: This interview has been lightly edited for length and clarity.

FM: What role, if any, did Harvard hockey play in your progression to becoming an Olympic athlete?

RG: When I joined the team as a freshman, I was used to being a top offensive player on my past teams. But Katey Stone [Harvard Women’s Ice Hockey Head Coach] sat me on the bench because I was lazy and sloppy in the D-zone [Defensive Zone] and we already had plenty of high impact offensive players. Basically, I had to learn to take pride in the less glamorous aspects of the game and become a well-rounded two-way player. I think that serves me well now, because, frankly, we spend most of our time in the D-zone on Team Korea.

Progressing from sitting on the bench to being a top two line player over my four years at Harvard really gave me a different perspective on the game. I think players who never have that experience of sitting on the bench sometimes have trouble empathizing with players at the bottom of the lineup. But because I’ve been there and I know how it feels, even though I’m on the top two lines with Team Korea, I try to give a lot of attention to the players who are struggling for ice time, just constantly letting them know that they are valued and helping them psychologically to play their best even when they are under the pressure of knowing they may only get a few shifts in a game.

FM: When and how did you find out about making the Olympic team? How did you react when you were asked to represent?

RG: The Korean Ice Hockey Association first contacted me via e-mail in 2014. They said they were searching for Korean heritage hockey players to join their team for the 2018 Olympics and invited me to skate with the team for some exhibition games against Kazakhstan in the summer of 2015. I honestly wasn’t sure whether it was real or some kind of joke, or if they realized how long it had been since I played hockey competitively. There were several emails back and forth, and eventually I agreed to go for one summer just to check it out—I was thinking, if nothing else, this was a free trip to Korea. I ended up having a lot of fun and realizing that I could help the team if I got back into shape. I could see how passionate this group of girls was. I saw that KIHA was putting in the time and the money to use the Olympics to spark the long-term growth of ice hockey in South Korea. I realized it was an opportunity I couldn’t pass up.

FM: What were your hockey goals and dreams growing up? Did you ever dream of playing in the Olympics?

RG: Of course I dreamed of playing in the Olympics. I was part of the generation that was inspired by watching Team USA and Team Canada battle for gold at the 1998 Nagano games. And I wanted to be just like them when I grew up. But at Harvard, I got to actually play with Olympians from Team USA and Team Canada—that included Julie Chu, Caitlin Cahow, and Sarah Vaillancourt. And I think any Olympic dreams I had were dashed when I realized just how incredible they were. I did my best to keep up with them, but I’m just not that talented. Playing for Team Korea is an entirely different story, because we aren’t some group of superhuman athletes. We are a ragtag group of hockey players that represent nearly all Korean hockey players in existence, and I came out of retirement after 5 years to skate with them. So this is not the fulfillment of the Olympic dreams from my childhood. It's a completely different dream that I never could have dreamed up on my own.

FM: What does it mean for you to play for the Korean team, as opposed to an American team? Who is going to be at the Olympics to watch you play?

RG: Since I am representing Korea as the daughter and granddaughter of Korean immigrants, the focus is all on my family. My grandparents live in Chicago now, and they immigrated to America when Korea was still very poor and recovering from the Korean War—my grandfather actually worked in the South Korean government. He was worried about his family’s safety, so they decided to make this transition to life in the US. It wasn’t easy for them. They don't speak English. They're educated people, but once they got here it was like none of that mattered anymore. They were back to square one, working multiple jobs, trying to make ends meet. Everything they that gave up sacrificed was for their family so that their children could have a chance at a better life. I know that they miss Korea and it's hard for them to sort of be separated from their home country. Seeing me living there now in and wearing the Korean jersey is very emotional for them. So I try to honor them however I can. I am wearing my Korean name on my jersey, Hee Soo, and I wear number 37 to represent the year my grandmother was born. They will be coming to PyeongChang along with my mother and father, and given their age, they think it will probably be their last trip to Korea. So I'm really grateful that I'll able to share this experience with them.