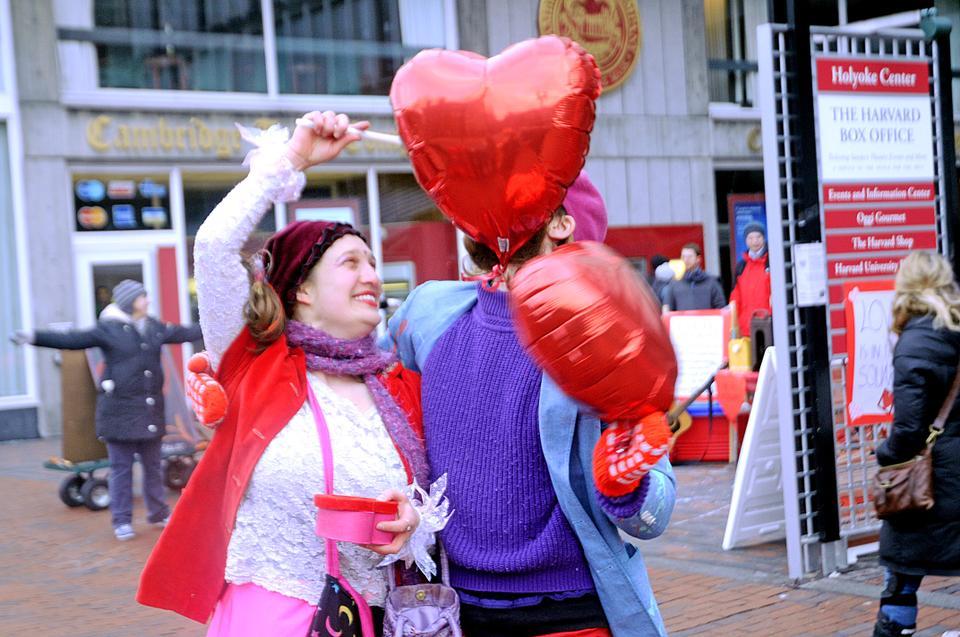 Picture this: You’re a 20, maybe 21-year-old Harvard boy in your junior year of college—hormonal, kind of a nerd, not really sure how to talk to girls. Cambridge doesn’t yet have shuttles to ease the long trek between Harvard Yard and the Radcliffe Quadrangle. It also doesn’t help that the College isn’t co-ed and the gender ratio in each of your classes sucks. Dating apps like Tinder and Bumble don’t exist yet; it will be a long 29 years before Harvard’s own Datamatch is developed.

The Radcliffe students who took classes with Harvard boys but lived in the the Quad couldn’t enter the then male-only Lamont Library, but they could get into intercollegiate mixers—if they paid a small fee. These mixers were in basketball-court gymnasiums with DJs playing records inside, and, occasionally, maybe even a live band. Girls came to these mixers from all over: “Wellesley, BU, whatever,” recalls Jeffrey C. Tarr ’66.

Like other 20-year-old boys in 1965, you might have gone to these mixers to meet girls. Tarr and David L. Crump ’66 certainly did. But these mixers were never quite the ideal environment to find a match. “You’d ask yourself, ‘Why am I here?’” Crump says. Harvard boys even ventured as far as an hour-and-a-half off campus for mixers. “It wasn’t uncommon to drive out to Smith back then,” Crump adds.

The main alternative to these mixers was, in Tarr’s words, being “fixed up.”

“Maybe your mother would tell you about someone who was going to a college in the area,” he explains.

In the fall of 1965, Tarr and Harvard classmate Vaughan Morrill III ’66 grew tired of the insufficient dating scene. They wanted a better, more surefire way to “fix up” people. Tarr hoped to automatically sort out people who were “not appropriate” for each other.

So Tarr and Morrill created the very first computer-based matchmaking service in the United States. They called it Operation Match. Morrill dropped out of Harvard soon after, but Tarr, who majored in mathematics, hired a “more or less homeless” Cornell University dropout named Douglas H. Ginsberg who would later attend Harvard Law School and become nominated to the Supreme Court. Tarr then solicited the help of his chemistry-major roommate Crump. The three of them—Tarr, Crump, and Ginsberg—managed Compatibility Research Inc., Operation Match’s parent corporation.

To enter, its clients filled out a paper survey with 75 questions about themselves and the same 75 questions about their date’s ideal characteristics. They would then mail their answer sheet to Cambridge along with a $3 fee. Their answers would be recorded on punch cards and run through a room-sized IBM 1401 computer. Three weeks later, the clients would receive a sheet of paper with the names and contact information of their top six matches.

Today, online dating sites are a dime a dozen, but in the 1960s, Operation Match was years ahead of its time. “One in a Million” was printed in big, bold letters at the top of the survey’s second page.

The questions weren’t scientifically designed. The founders sat down, thought about their own dating criteria, and just wrote them. The questions ranged from basic to raunchy—the first edition of the questionnaire asked applicants to pick between one of nine height ranges; what they wanted in their date’s SAT score; whether their race should be “Caucasian,” “Oriental,” “Negro,” or some combination; how much they believed that they were a “conformist;” and whether they were sexually experienced or believed that “romantic love is necessary for successful marriage.” They even added a question about their ideal date’s bra size that they ended up throwing out.

There were also four short-answer situational questions. One question, for example, asked: What would you do if your roommate set you up with an “embarrassingly unattractive” blind date for a big dance? Would you “monopolize your roommate’s date, leaving your roommate with only one noble alternative,” or would you “act very friendly the whole time and run the risk of being trapped into a second date”?

Once the questions had been finalized, Tarr, Ginsberg, and Crump got the word out. They called up local school newspapers and offered them a 10% commission to advertise their product. What started as a side project quickly turned into a full-time job: “First it took 10 hours a week, and then it took 10 hours a day,” says Tarr.

And compared to meeting someone at a mixer, Operation Match did have significant advantages. “You got someone’s name, you could look them up on the facebook, talk to them on the phone,” Crump says. He added that thinking of a conversation starter was easy, because you could simply chat about why you think you matched.

The service quickly became popular, not only on Harvard’s campus and around Boston, but at schools around the country—all the way down to North Carolina and out west toward California. “Every semester, we expanded it because people wanted to do it; there was the demand,” Tarr says. Then, Look magazine decided to feature Operation Match on its 1966 Valentine’s Day cover, boosting its popularity even more. “By the spring semester of my senior year, we must have gotten 100,000 applicants.”

Operation Match wasn’t without competitors. Similar services quickly sprung up around the country. One of them was Contact, Inc., started at MIT. But, according to Operation Match’s founders, their company had a much larger user base. “I think we were annoyed… I never thought about MIT during the years I was at Harvard, and never had contact with people there,” Crump says. Tarr agrees: “I’m sure that they did all right as well, but we were lucky to be the first, and we kind of dominated it… because of the size of our pool.”

Tarr and Crump’s college career saw the rise of Operation Match, but it also saw its fall. Soon after Tarr and Crump graduated, Operation Match’s novelty faded. “It was a fad, and it was a big thing for us for a couple of years, and then the interest of it died out,” says Tarr.

“Because of the Vietnam War, if I dropped out of college [to focus on the company], I would have probably been drafted,” says Tarr. “And so, we sold it in two pieces for very little money.”

They sold the first piece to an advertising company called National Student Marketing. They sold the rest to a company that performed the matchmaking process for “single hotels” that would attract customers by “matching up males and females.”

But still, even though it didn’t last forever, Operation Match achieved its goal. “We were able to have a lot of great sexual experiences out of this—you know, we were college guys,” Crump laughed.

“But we went on to do other things. I was a scientific guy, so I went to NASA to be a scientific engineer first, then I went to law school,” he explains. “Jeff went to Wall Street and made money, and so forth. We were no longer pushing the thing, and it died, I guess, a natural death.”

“I would imagine that at Harvard, now, people do all kinds of different things by which to meet people,” Crump says.