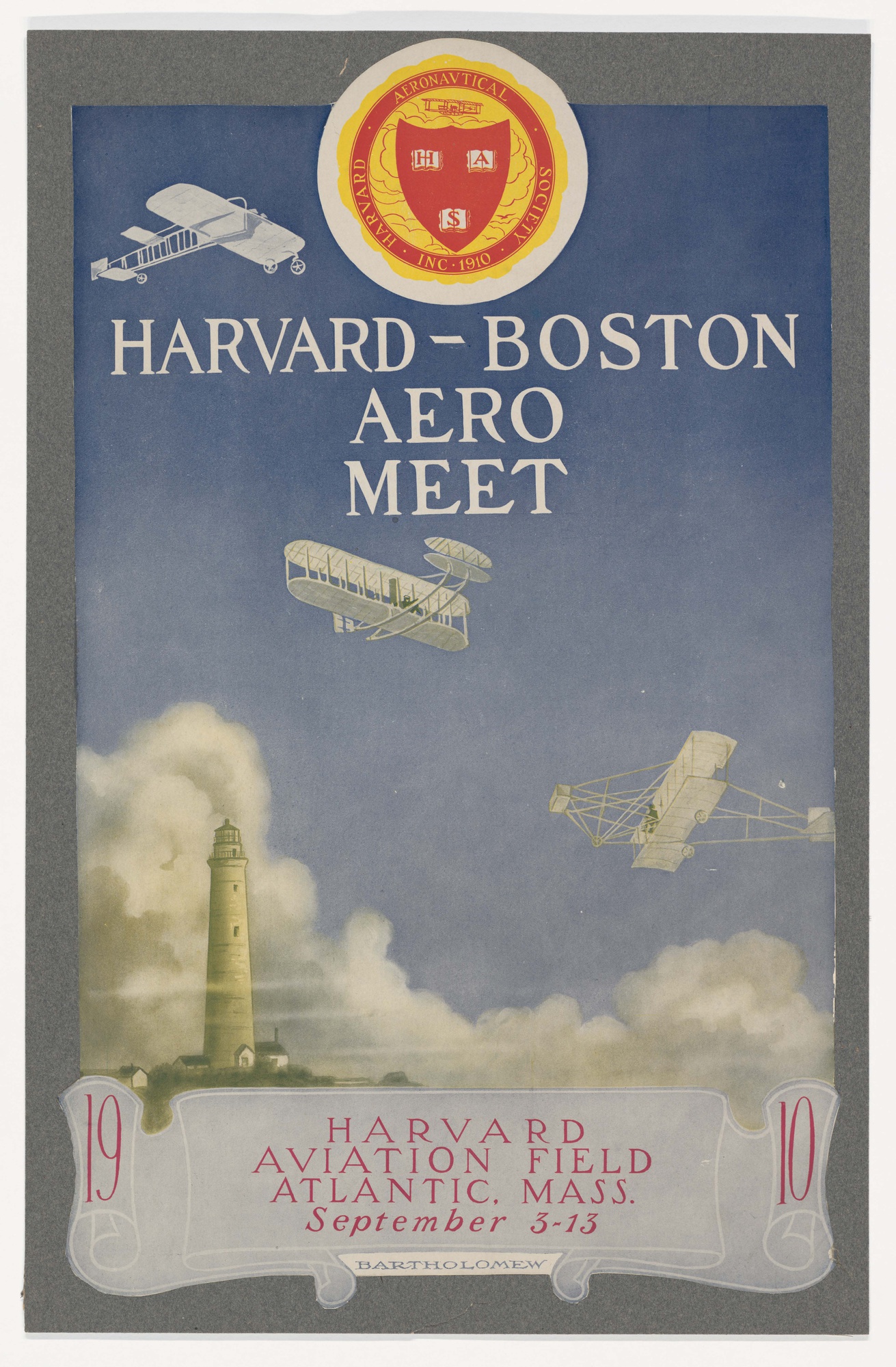 When Air Racing Was a Collegiate Sport

Three extra days of dropping eggs out of aeroplanes had to be added to the academic calendar.
By Kathryn S. Kuhar

In 1910, Harvard University President Abbott Lawrence Lowell decided there would be no flying on Sundays. That is, no airplane flying. Lowell’s decision meant that three extra days of dropping eggs out of aeroplanes had to be added to the academic calendar.

The year was 1909 and “flying machines” were the new interest of the elite, though most people in the world had never seen such a contraption.

Only six years after the Wright brothers’ first flight, Harvard affiliates created a club dedicated to aeroplanes. On Nov. 11, 1909, the Harvard Aeronautical Society was born, founded by a group of Harvard undergraduates, graduates, and faculty. According to local newspaper reports, about 300 students went to the first meeting, 250 of whom joined immediately. Within three months, the club had grown to 360 members and established an area in Gund Hall devoted to aviation, complete with a glider, models, and plans to build an aeroplane. Harvard had caught the aviation bug. 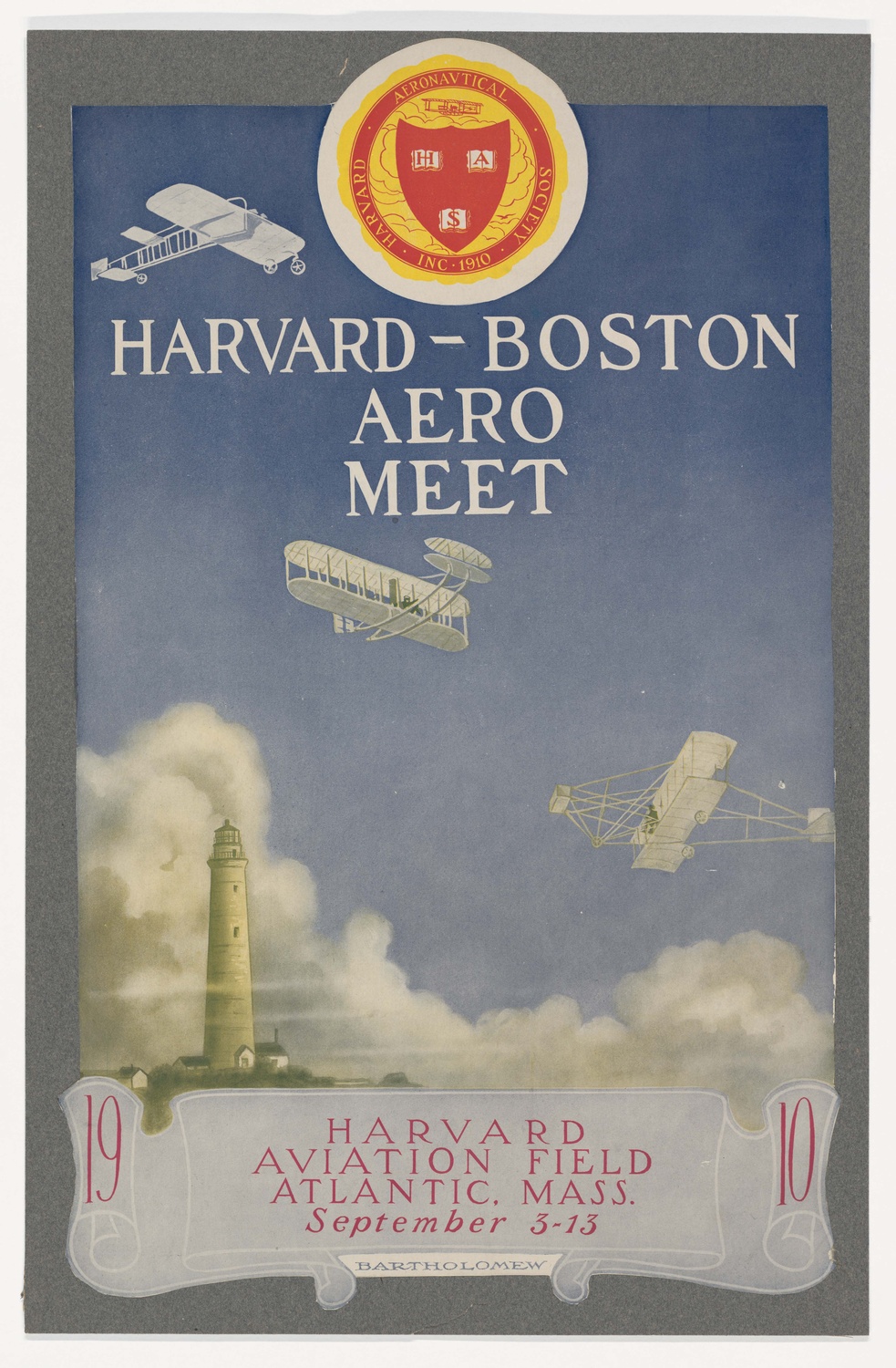 The club began with educational aims “to promote the advance of aerial navigation” and to teach students about the burgeoning field of aeronautics. While part of the club was devoted to a lecture series on aeronautics, the club also built its very own aeroplane—the Harvard I—which made its first flight on June 1910. Led by Professor Abbott Lawrence Rotch, also the founder and director of the Blue Hill Observatory, the club became part of the Aero Club of North America by March 1910. This association allowed Harvard flyers to compete in domestic and international competitions.

Meanwhile, the Harvard club was planning a competition of its own which would dazzle the nation. The Harvard-Boston Aviation Meet, which took place Sept. 3rd to 13th 1910, was “the first meet of this kind of any consequence to be held in America up to the present time,” according to Scientific American. With the support of President Lowell and Boston Mayor John F. Fitzgerald, the event was expected to attract about 500,000 spectators to the field, along with countless more who would come to watch planes fly around the Boston area. Attracted by the promise of $50,000 in prize money, some of the best flyers in the world—including Wilbur Wright, Glenn Curtiss, and Claude Grahame-White—shipped their planes to Boston. The society’s activities were closely followed by the press, including The Crimson, which recorded club meetings and updates.

The 1910 meet was originally planned for Soldiers Field, where Harvard’s athletic fields are now located. However, due to space constraints, the meet moved to modern day Quincy, Massachusetts. This airshow was so alluring that President William Howard Taft and Massachusetts Governor Eben Sumner Draper decided to attend. Events included challenges in speed, altitude, duration, accuracy, as well as “dropping bombs on battleships.” While the bombs were made of plaster and the ships only outlines in a field, the meet helped demonstrate the potential military uses of airplanes. Two world records, ten days, and thousands of dollars of prize money later, Harvard’s first aeronautical meet was a huge success.

In the years following, flying became “sport.” Collegiate teams from across the northeast would compete in events including speed, accuracy, and bomb dropping. In 1911, the Harvard Aeronautics Society hosted the first glider race. The Harvard-Boston Aviation meet also continued. In 1911, the meet added a new event which required pilots to race to different locations in Massachusetts, New Hampshire, and Rhode Island.

Tragedy struck in 1912 when a pilot and passenger died in an accident during the aviation meet, abruptly ending the tradition of large Boston aviation competitions.

While the original society seems to have fallen apart after 1912, the Harvard Aeronautics Club came back to life in 1915 and taught students how to fly. In 1925, the Harvard Flying Club emerged and became extremely popular. It appears that, over time, this group took over the role of the original Aeronautics Society, competing in intercollegiate meets and teaching students how to fly planes. Harvard did well on the intercollegiate circuit, competing against schools including Yale, NYU, Dartmouth, Ohio State, and Michigan.

Another flying society began in 1950, which included racing and allowed students to fly private planes around the country. According to reports at the time, the group earned a “playboy” reputation. A Crimson article at the time detailed “Aviation Club Mixes Flying And Partying,” mentioned how “HFC provides housing for pilots and their dates at the Falmouth Playhouse.”

Yet another iteration of the society appeared in 1983. In 1985, the Flying Club celebrated the 75th anniversary of the Harvard-Boston Aviation Meet with tours, lectures, and movies.

The club was briefly revived in 2007, but does not survive today. While it seems that Harvard’s days of dominating the skies are over for now, only time will tell if the college’s long-held aviation bug will take to the skies in years to come.