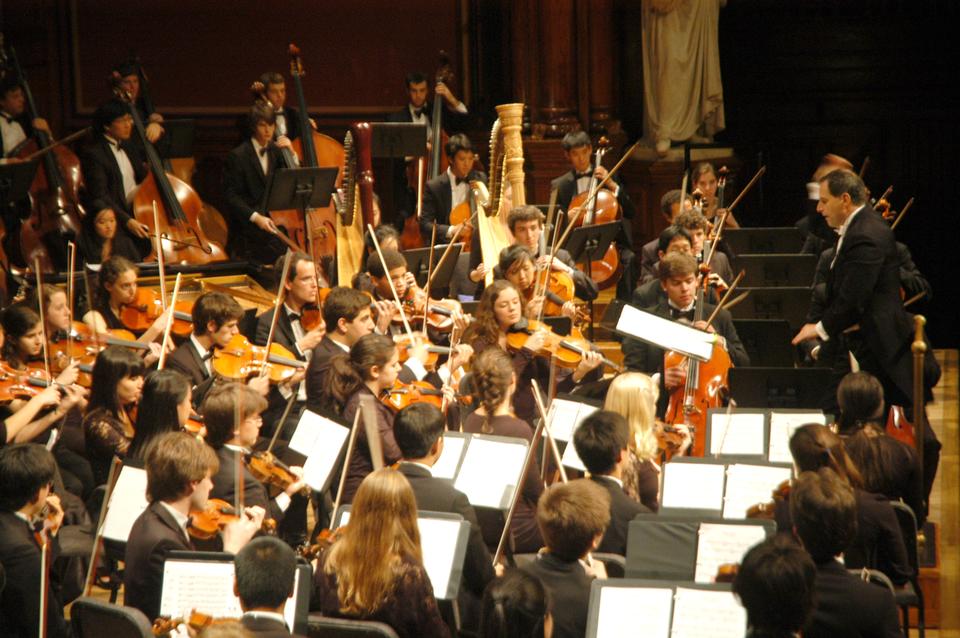 The large-scale collaboration between student ensembles had a very specific musical story to tell: the human history of the atomic bomb.
By Madeleine M. Joung

More than 40 years after scientists first detonated a nuclear device in the Trinity test, composer and conductor James Yannatos assembled over 350 musicians for an unusual memorial.

In April 1986, 90 members of the Harvard-Radcliffe Orchestra premiered “Trinity Mass,” composed by Yannatos. Over 260 vocalists from the Harvard Glee Club, the Radcliffe Choral Society, the Collegium Musicum, and other local choral groups joined them on a packed stage in Sanders Theater. The large-scale collaboration between student ensembles had a very specific musical story to tell: the human history of the atomic bomb.

With the looming history of World War II, the Vietnam War, and the Cold War, “war was there, in your consciousness, a lot,” says Nyia Yannatos, the composer’s widow.

James Yannatos told Harvard Magazine in 1986 that the composition was “a Mass for beyond war.” He wanted the music to persuade listeners of the horrors of war, both nuclear and conventional.

Before coming to Harvard, and long before he composed “Trinity Mass,” Yannatos was already using music for social justice. Earlier in his career, he was active as both a violinist and as an assistant conductor in San Antonio, where he and a bass player founded an interracial chorus. “Now, we’re talking in the fifties, in Texas,” Nyia notes appreciatively.

His passion for social justice also informed his pacifist politics. “He’s been antiwar ever since he could speak,” she says. On Memorial Day in 1970, at the height of the Vietnam War, Yannatos organized a concert called Musicians for Peace in Sanders Theater. A massive ensemble performed Brahms’ Requiem, a performance that anticipated his “Trinity Mass.” The mood of that performance was also somber—Yannatos requested the audience refrain from applause in honor of Memorial Day.

Yannatos was music director of the HRO from 1964 until his retirement in 2009. During the course of those 45 years, “Dr. Y,” as students called him, built the orchestra up from a struggling, incomplete ensemble to a full group that regularly undertook international tours. At one point, he even turned down an opportunity to become an assistant conductor with the Boston Symphony Orchestra, choosing instead to remain at Harvard.

But he was still “a more approachable conductor than [others] I’ve worked with,” says William C. “Bill” Hahn ’87, who played clarinet in the HRO under Dr. Yannatos’ direction throughout college. “He cared deeply about the orchestra and [his] students.”

After performances, the Yannatoses would often invite students over to their home for a listening session so they could hear their work. “He loved being with students and having music be an important part of their lives,” Nyia says.

The Trinity Mass piece was important to Yannatos. Nyia preserved the program notes, printed on thick paper in red and black ink. Yannatos writes in the program that “Trinity Mass” sketches out a meditation on the history of the atomic bomb, treating time “cubistically.”

Some of the events swirled into the score include the detonation of the atomic bomb at Hiroshima and the Atomic Energy Commission’s inquiry into J. Robert Oppenheimer ’25 during the McCarthy era. Oppenheimer was investigated for his reluctance to support early development of the hydrogen bomb.

The libretto draws from 33 sources, ranging from the Bible to J. Robert Oppenheimer and Winston Churchill to voices as diverse as Native American leaders, Hiroshima survivors, children, and the King of Heracleopolis (circa 1990 BCE).

“Well, he certainly did a lot of reading to find the quotes that he wanted,” Nyia says, laughing. After a long period of research, Yannatos compiled the libretto in three days during the summer of 1984.

The title is only a religious reference in an indirect sense. Oppenheimer chose the codename “Trinity” for the first test of the atomic bomb in the New Mexico desert. He drew inspiration from John Donne’s Sonnet 14, which begins: “Batter my heart, three-personed God.”

In the face of this brutal conception of God, the first movement concludes: “Christe, eleison. Christ, have mercy on us.”

Over the course of 75 minutes, the hundreds of musicians crammed on the stage carry the listener from ethereally dissonant instrumentals to shining, full choral passages.

The day after the premiere in Sanders, the entire ensemble took buses to New York City to perform the mass again at the world’s largest cathedral, St. John the Divine. As the Yannatoses prepared to enter the vast cathedral, Nyia recalls that they “were both a little anxious, [wondering] will people come?” But the piece proved to be a powerful draw for the audience. “We walked in, and the place was just packed.”

In the views of both the critics and the composer, the performance was a success. According to the program notes, the New York Times noted that “one cannot help feeling strongly” about the nuclear imagery, and the Boston Globe dubbed it “a cerebral feast of words and music.”

“It was wonderful having so many groups come together,” Nyia says. “I remember my husband feeling enormous gratitude that it did come off the way it did, and that his vision was played so beautifully.”

By the end of the 1986 performance at St. John the Divine, Nyia “truly felt people were moved.” She recalls that, as the audience filed out of the cathedral, “we all walked out feeling, yes, [change] could be possible—wouldn’t it be so beautiful?”

Still, she says, “if he were alive now, I think he would be so, so horrified” that there are “generations of young people who now have only grown up knowing war.” Her voice is raw.

Nyia says her husband would nonetheless continue to have faith in the possibility the world could change, and that people fundamentally want peace. In the mass, after all of the horror that the music illustrates, Yannatos pulls the listener into a sweeping, hopeful ending: “I dream of that day when my child will say: ‘Mother, what was war?’”