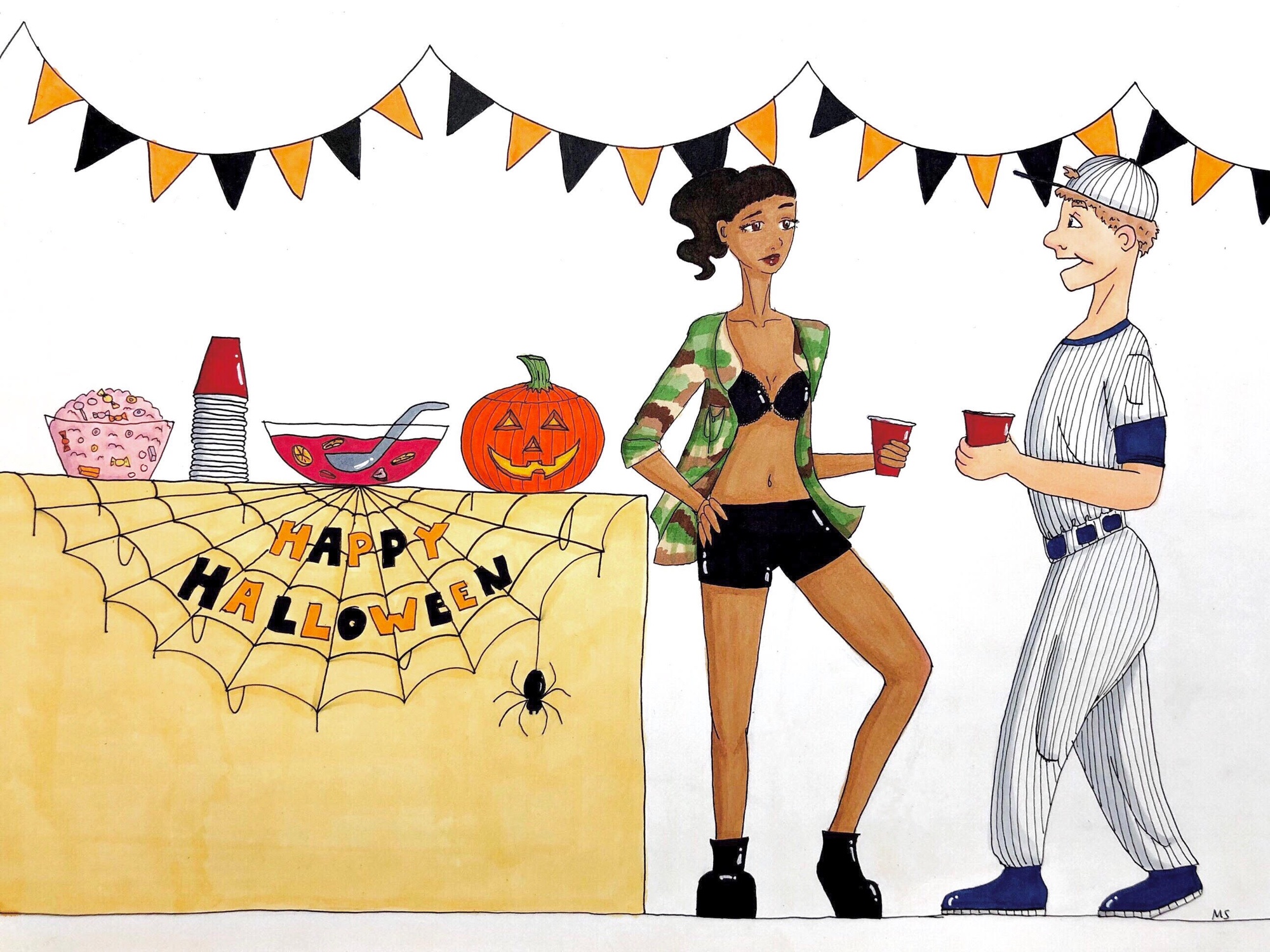 I slid into a line of girls combing through racks of nude-colored sports bras and thonged one-piece bathing suits. I hadn’t actually picked a costume yet—nor was I even thinking about what animal or character I’d pretend to be. I just knew I was going to wear as little as humanly possible.
By Jensen E. Davis

On Saturday of Halloween weekend, I drove to my local American Apparel and joined a legion of teenage girls intently browsing neon leotards and animal-print leggings. The store was congested with girls, each of them scrutinizing every thigh-high sock and plaid miniskirt as a potential outfit for a Halloween party. We weren’t so much looking for costumes as we were shopping for individual pieces: metallic-colored catsuits with the deepest v-necks, iridescent leggings that would lift our butts as high as possible, and body suits that zipped down to our belly buttons.

I slid into a line of girls combing through racks of nude-colored sports bras and thonged one-piece bathing suits. I hadn’t actually picked a costume yet—nor was I even thinking about what animal or character I’d pretend to be. I just knew I was going to wear as little as humanly possible.

Two years earlier, the night of my older sister’s first high school Halloween, I sat on her bed while she and her friends primped for a party. One of my sister’s friends put on a blue-sequined bustier from a store called Trashy Lingerie and peacock feathers safety-pinned to American Apparel lace booty shorts. Her other friend donned a leather vest with high-waisted spandex, a plain black bra, and a leather baseball hat. She said she was a biker chick. As the girls had gleaned from Facebook photos, in high school the animal ears were an afterthought, only picked after assembling a hot outfit.

So, at 16, while preparing for my first high school Halloween party, I finally shelved the store-bought costumes: the itchy polyester spider witch dress that skimmed my knees, the Sandy Cheeks onesie and plastic mask with a crude print of her cartoon face. I joined the annual Halloween-weekend pilgrimage to American Apparel.

I left the store with a lacy bralette and a pair of black, high-waisted hot pants that didn’t even cover my entire ass.

Thirty minutes before the party, I finally decided on a costume. From Facebook stalking the cool clique in the grade above, it seemed like there were two go-to options: a sexy school-girl or a sexy soldier. I went with the latter.

Around 10 p.m., when it was time to leave, my mother offered to drive us to the party. This posed a problem for my exposed legs, stomach, and chest. As my mom loves to tell me, she “went to an all-women’s college in the 70’s.” She was a feminist, a term rarely discussed in my classes at school, so a term I only understood in platitudes (Pussy power! Girls rule boys drool!). But I knew there was no way she’d let me out of the house wearing not just one exposed bra, but two—a black-push up underneath the sheer lace bralette.

The stakes were high. Missing my first high school Halloween party, or even attending the party but wearing a costume that included a shirt and pants, would postpone my first bid at seduction by at least a year. I had finally dared to wear just a bra, to draw attention to the body I usually hid beneath oversized striped t-shirts. My friends and I had straightened each other’s hair and watched YouTube tutorials for over an hour to teach ourselves how to apply winged eyeliner. We even planned phrases to initiate conversations with boys.

My two best friends dressed as vampires, wearing outfits nearly identical to mine—black booty shorts and black bustier crop tops, the midpoint between shirt and bra. They stuck very subtle vampire fangs to their teeth with dental putty that eased the defanging process (which they carefully considered when deciding between different brands of fangs—sharp teeth were only sexy from a distance, so if a boy actually asked them to make out they wanted to be able to defang as quickly as possible). Over my booty shorts and bralette, I pulled on an army jacket.

Though I was not cognizant of it then, my costume was only sexy because I didn’t actually pose a threat—the kinked-up camo emphasized my body instead of making it blend in, my only weapon my pushed up boobs. A 16-year-old soldier wearing too much mascara is hot because the combination of cleavage and camo is just a reminder that, while she can salute to powerful men in uniform, she hasn’t actually built up any fighting techniques through push-ups or gun drills. But, as far as I could tell at the time, the only ammo in my arsenal was my own body.

So, I quickly threw on an old tank top and planned to slip it off once I got to the party. Having to hide my costume only further convinced me of the power in looking hot. It felt like sneaking your own food into a movie theater.

When we first arrived at the party, I saw plumes of smoke hovering over a crowd of older kids with whom I was too afraid to make eye contact in the hallways at school. Before we walked towards the party’s center of gravity—a ping pong table littered with red solo cups and empty Smirnoff bottles—my friends and I prepared ourselves by locking arms, ensuring we would not somehow lose each other and have to wander the party alone.

The three of us—two vampires flanking me, the soldier—lingered by the edge of the party, where couples made out and boys shamelessly cupped girls’ barely pubescent butts. Fifteen minutes later, we finally had enough courage to walk inside the house instead of wandering in the backyard. On the way inside, I saw someone vomit Red Vines.

Inside the house, sitting alone on a couch and nursing a Four Loko as he stared at nothing in particular, was the boy I had made out with at a party the weekend prior. I thought he was the coolest boy I’d ever met. He had three vapes and knew how to smoke out of a bong. And I wanted to make out with him again.

The weekend before, he had pursued me—he approached me while I stood in line for the bathroom and, as he talked at me on a topic I had forgotten by the following morning, I giggled and twirled a strand of hair around my index finger. He very suddenly leaned in and started kissing me, but I didn’t know how to kiss so I just stood with my mouth slightly parted, my arms dangling at my sides, as he shoved his tongue in my mouth.

But this time I wanted to pursue him. So, I feigned a surprised “Hi!” as I walked past and sat on the couch next to him. I opened my jacket slightly, to reveal what felt like voluptuous, barely restrained cleavage but was really just my protruding chest bones. I crossed my legs, stretching them out so he could see that I had both shaved and moisturized.

His lips were chapped and his mouth tasted like pepperoni pizza. He left my mouth wet with slobber. But the actual kissing was irrelevant—I had decided to seduce a boy and successfully did so with my very own body.

Two days later, my computer pinged with a notification from my older brother, a college senior. Apparently, someone had uploaded a group photo on Facebook. It featured me with eyes half-closed and lips puckered in a “duck face,” with my costume—or lack of costume—entirely visible. My brother saw the picture and posted about it in the long defunct “Lawlz Davis Sibz” Facebook group.

Jack: “what the fuck Jensen did you really wear just a bra out?”

“boys will think they can take advantage of u”

“if u do this again i’ll tell mom”

I immediately untagged myself from the photo, erasing any evidence of the night from my profile. It wasn’t that I feared my second-wave feminist mother’s punishment—I had already worn the costume out. Rather, I suddenly felt like the hot pants that exposed my legs—that suggested I not only wanted to be looked at but could command those looks—had actually marked me as a soft target, a target obviously unaware of her own self-inflicted vulnerability.

I promised my brother I wouldn’t dress like that again and, to prove it, gave him the right to mock my Halloween costume for eternity.

During my freshman fall, I enrolled in my first Women and Gender Studies class—“Beyond the Sound Bite: Women, Gender, and Sexuality in the Daily News.” It was taught by Alice Jardine, one of two women professors I had that semester. She wore lots of paisley and velvet, nonchalantly dropped the term ‘postmodernism’ (and even did so in a palatable way, always breaking down the term so that it lost its Bogeyman quality), and analyzed the discourse around Hillary Clinton’s pantsuits as rigorously as she analyzed Baudrillard’s books.

The class was a 12-week crash-course in gender theory. By week six, I had acquired a whole new vocabulary that included glittery terms like “constructivism,” and “subject hybridity.” Three weeks before Halloween, we learned my favorite term—“the male gaze.”

I stayed up very late most nights that semester reading the women on the syllabus. I had a whole team of smart women thinkers, women whose faces I never even saw. Suddenly, I could abstract my body into a larger narrative instead of fumbling to understand the actual, immediate thing.

Now, I have glossaries and curricula for scrutinizing the ways in which people who identify as women can find agency over our bodies, and the reasons that finding such agency often feels as elusive as hunting ghosts—for very complex and historically valid reasons. But I couldn’t do the same at 16. Still, wearing two bras on Halloween might feel nice.