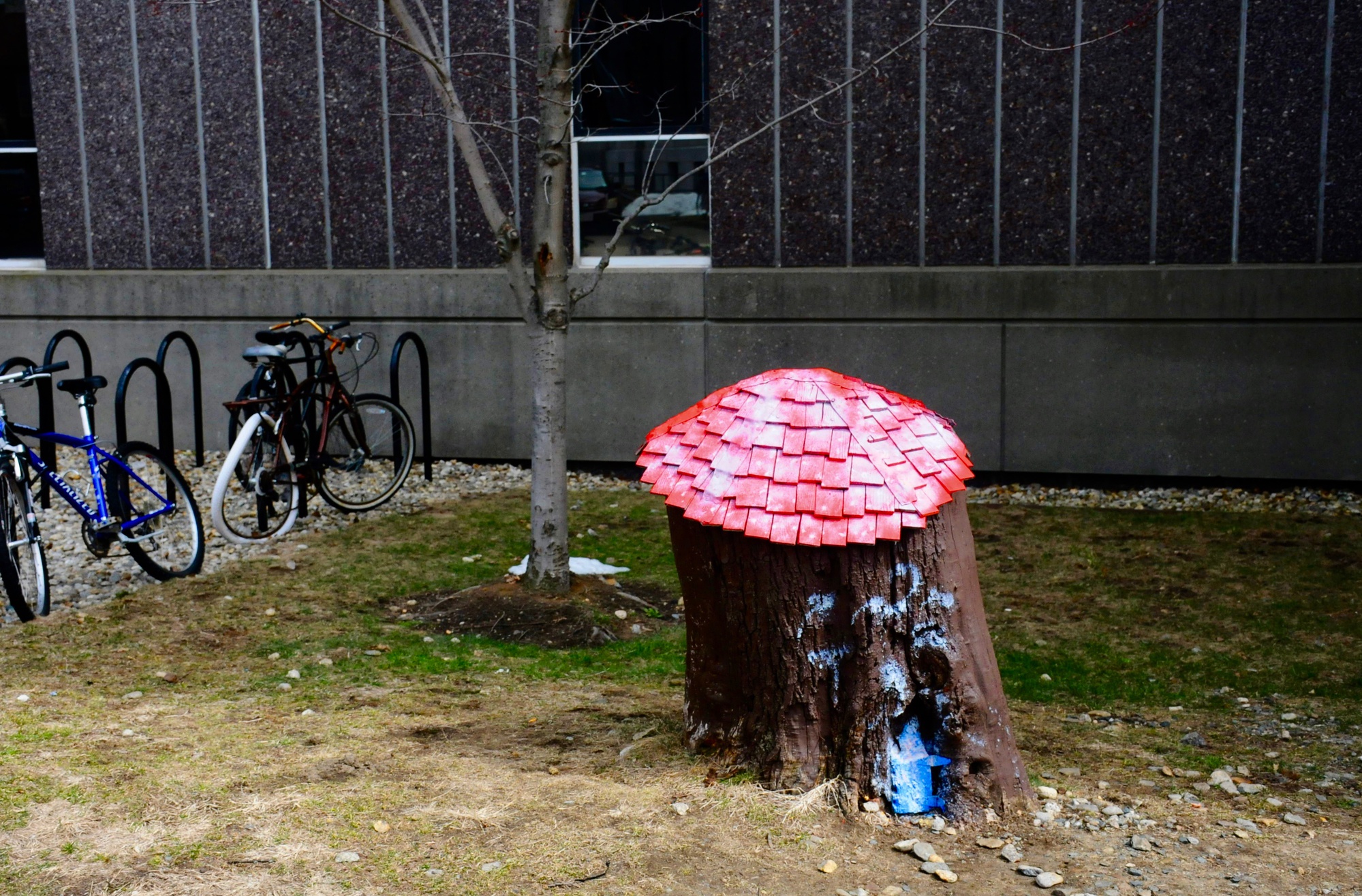 A small stump with a red shingle roof and battered blue door next to the Science Center are all that remain of Winnie the Pooh's homes in Cambridge.
Advertisement
Advertisement

Over the past 20 or so years, Cambridge has been home to two different Pooh trees. The house next to the Science Center seems to be the oldest one, having been built sometime in the early 1990s. Its exact origins remain a mystery, but it survived even after the tree that housed it was chopped down in 2012.
By Kathryn S. Kuhar

The next time you walk past the Science Center on your way to the Law School Library, stop and take a look around. You are now in the Hundred Acre Wood:home of Winnie the Pooh and A.A. Milne’s beloved franchise.

Confused? Look to your right and notice the small tree stump with a fading red shingled roof and a worn blue door. Some illegible blue spray-painted word covers part of it. The house, passed by hundreds of students every day and largely unnoticed by pedestrians, is so tiny that only a small animal or a magical creature could possibly live in it.

Over the past 20 or so years, Cambridge has been home to two different Pooh trees. The house next to the Science Center seems to be the oldest one, having been built sometime in the early 1990s. Its exact origins remain a mystery, but it survived even after the tree that housed it was chopped down in 2012.

Once upon a time, Pooh had another home in Cambridge, closer to the Quad. In 1998, E. Mitchell Ryerson (“Mitch”), a local sculptor, built a Winnie the Pooh house out of a hollow tree trunk on Hurlbut Street. Ryerson says he had been working on a project with the Cambridge Arts Council to carve seats out of trees that had been cut down. When he came across the tree on Hurlbut Street, it was already known as “the Pooh Tree,” thanks to the late Harvard Professor B. Irven DeVore, or “Irv.” According to Ryerson, Devore “was obsessed with Winnie the Pooh. He had turned some trees in front of his house, which was just down the street, into Owl’s House and Eeyore’s House for his grandchildren.”

The house on Hurlbut Street was much more elaborate, built inside the hollow of an eight to nine-foot stump. Its roof sheltered a window and a seat with a secret compartment underneath. Inside was a staircase and mini furniture, custom-made for Pooh’s House. While Pooh was never home, people came from far and wide to visit, leaving messages in a journal inside the tree. Ryerson still keeps many of these journals, which include notes like “Dear Pooh, I want to be your BFF,” and “I hope that you get a lot of honey.” He estimates that they went through about 100 journals in the 20 years that the house existed.

Unfortunately for fans of A.A. Milne’s classic children’s stories, the Pooh House on Hurlbut Street no longer exists. The tree house was chopped down just over a year ago, in the spring of 2017. Even Winnie the Pooh’s eternal youth could not escape the Americans with Disabilities Act and the inevitable decay of an old tree.

So that leaves Cambridge with one last and often overlooked home for Milne’s silly ol’ bear on Harvard’s campus. The Pooh House you see today is only a husk of its former glory. It hadn’t always sprouted out of such a disappointing stump, but the rest of the tree was chopped down in 2012. And Pooh’s House has been the victim of vandals for years. George H. Eastman, a local doctor and Graduate School of Education alumnus, served as a caretaker for the House for several years. He made a sign for it that said “Pooh” and created a small door—both of which have since been ripped off. Rabbit and Piglet lived in nearby trees for a time, but those houses have disappeared. Today, Pooh’s blue door is bolted in place and the red shingled roof is weather-worn.

Pooh’s presence on Harvard’s campus wasn’t always limited to one tree stump. In 1946, a few members of a certain semi-secret Sorrento Square social organization that used to occasionally publish a so-called humor magazine applied to create a “Pooh Club.” William G. Rueter ‘46 was elected their Christopher Robin—whatever that means. But times have changed. Today, the dilapidated house by the Science Center is the only Pooh-friendly space in Cambridge.

So the next time you’re racing to class or trying to navigate your way to the Law School, take a moment to search for Pooh’s humble abode.