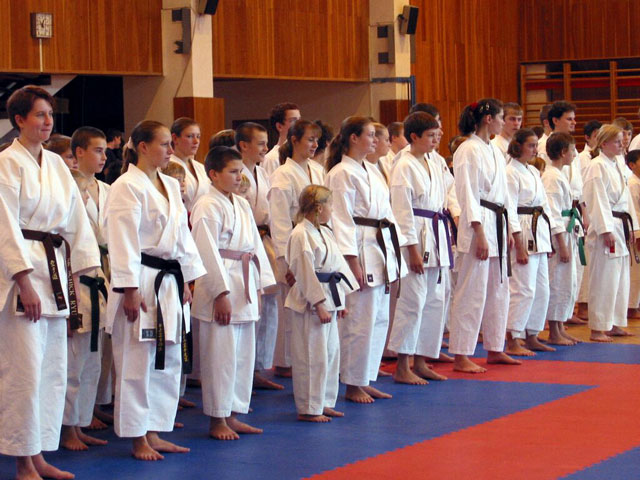 I had begun karate in pursuit of knowledge and Danger, but by age twelve, I simply enjoyed the sport.
By Norah M. Murphy

“The Dangerous Book for Boys” was bound in red cloth, larger than a spiral-bound notebook and much thicker. It was a 10th birthday gift for my friend, which I immediately began poring over with him. The tome was chock-full of incredibly useful information — building treehouses, decoding ciphers, tying knots, talking to girls — and I was enthralled. We spent a long August weekend weaving together lofty plans for running away from home or building a small settlement in the woods: some activity that would allow us to flex our newly learned and assuredly practical skills.

For my birthday, I asked for the tome’s feminine counterpart — “The Daring Book for Girls.” I was interested enough to ask for the book, but not countercultural enough to request a book specifically “For Boys.” To my chagrin, this book replaced tying knots with braiding friendship bracelets and building treehouses with turning cartwheels. It included a section describing how to throw a punch and some helpful hints on writing secret codes, but this felt insufficient — where was the Danger? Daring was a personality trait with undeniably positive implications, but Dangerous was Daring without the seatbelt and measured sensibility.

My ensuing desire to become a Dangerous Girl was not grounded in any sort of practicality or vengeance. I had no wrath; I was 10. I had spent the past several years absorbing YA-novel narratives featuring teenage girls who fought evil wizards and undertook espionage missions. Dangerous described my fictional companions, so why shouldn’t it describe me? To fulfill this desire, I decided to pursue fencing, a sport that delightfully necessitated the wielding of sharp objects, and karate, the closest substitute for learning how to beat someone up.

In an unsurprising turn of events, fencing was not the most accessible sport. My sword-fighting dreams were derailed by logistics, so I was left with karate, which was easily attainable via the local recreation department.

Seven-year-olds have nothing but free time and rampant energy, so they densely populated the beginner karate class at my local YMCA. Few students were above age 10 — students quickly learned that it took longer than six weeks to become a ninja and lost interest.

I had anticipated being one of the older students in the class, but I had not anticipated the age gap being so physically evident. I was tall for a 10-year-old, but had seven-year-olds always been this small? My uniform was somehow already too short, leaving my ankles scandalously exposed. I felt like a tourist in Lilliput.

Not only did I know less karate than my second-grade compatriots, and not only did I stick out like a gangly sore thumb, but, at age 10, I was on the precipice of puberty. This stage in adolescence is the embodiment of the sentiment “Please do not look at me or else I will be forced to fly into the sun.” This trifecta caused so much discomfort that I considered leaving the class and never returning.
Still, quitting karate after one class was the antithesis of the Danger I’d sought out. I gritted my newly orthodontia-clad teeth,and soldiered on.

Because karate is foundationally much less violent than my danger-seeking self had anticipated, my first few months of class were devoid of hand-to-hand combat, which was replaced with sparring done several feet apart — shadowboxing in front of a human mirror. I wasn’t disappointed at this lack of violence. I wanted to know how to engage in combat, not necessarily do so.

I had begun karate in pursuit of knowledge and Danger, but by age twelve, I simply enjoyed the sport. The sensei was a gruff, mustachioed man whose favorite activity was push-ups. He granted each student the same discipline and encouragement, and was kind but never overly warm.

I wasn’t knocking people’s heads from their bodies during class, but I was yelling loudly and ritually during movement sequences and throwing my entire weight behind my kicks. My mom encouraged this practice — “get your black belt before college,” she’d say. “I want you to feel like you can hold your own.” I had started to feel strong each time I went to class, and the idea of becoming a Dangerous Girl had since fallen to the wayside, but the idea of self-defense was naturally latent in the sport.

I steadily moved up the ranks into the “advanced” class, home to higher-ranked belt colors and slightly taller kids. I was breaking wooden boards with my body, learning how to do a halfway-decent push-up, and had a killer flying roundhouse kick (thanks to my longer-than-most legs). I was no longer concerned with the gaping inch of ankle skin left unguarded by my gi.

After several years of growing into my uniform, I was bumped up to the adult class. Perhaps I had finally gotten too tall, my kicks too lethal for the twelve year olds around me. Alternatively, I had started high school and the YMCA had regulations about who was considered an adult.

“Adult,” as a term, was a somewhat apt descriptor for the class, but it didn’t capture the off-kilter dynamic. There were several adult men in the group, ranging from older teens (mostly pale young men with acne-ridden complexions and sweaty palms) to dad-aged karate enthusiasts. I remember one other teenage girl in the group, maybe two on a lucky day. They got their black belts soon after I joined the class and moved on to other teenage pursuits (dance? academics? knife throwing?).

There was no formal difference between this class and all the classes prior: we all stood in the same line in order of rank, and all responded to commands in the same way. The men and women in the room were treated exactly the same, just as the boys and girls had been treated exactly the same in each prior class. But my hard-won confidence in karate faltered. The playing field was hypothetically level, but now I was set to spar against a 19-year-old man and uncomfortably aware of the physical difference between him and my 14-year-old self. I had signed up for a class where men would throw punches at me, but I hadn’t anticipated feeling so uneasy. And if I were to refuse to fight and buck the constructed social order of the dojo, it would only give credence to my insecurity in the space. We were left to face off, and I was once again uncomfortably aware of my body as it related to a man’s.

I wasn’t craving some cinematic “I can’t fight a girl!” moment, after which I would knock the offender’s stubble-ridden head clean from his slouching shoulders. I wanted to own real estate again — I had been relegated to a rental tenant, in the dojo and in my body. No longer could I gain ownership of the space through tenacity and adherence to the sport’s formal qualities. I was a teenage girl in a class full of adult men and, even with every possible meritocratic measure in place, no one had told me that a dangerous girl was only just on a level playing field with an adult man.

My mom had continually encouraged me to pursue my black belt over the years of my time in karate, and her enthusiasm increased as I entered high school. Fifteen was only a stone’s throw from college-age. Once I found myself physically uncomfortable and surrounded by somewhat-looming men, karate lost its shine as a means of protecting myself from actually looming, predatory men. I pulled away from the sport, and my mom dropped the rhetoric. If physical security couldn’t be found in a strong punch and far-reaching roundhouse kick, it was unlikely to be found in a black belt.