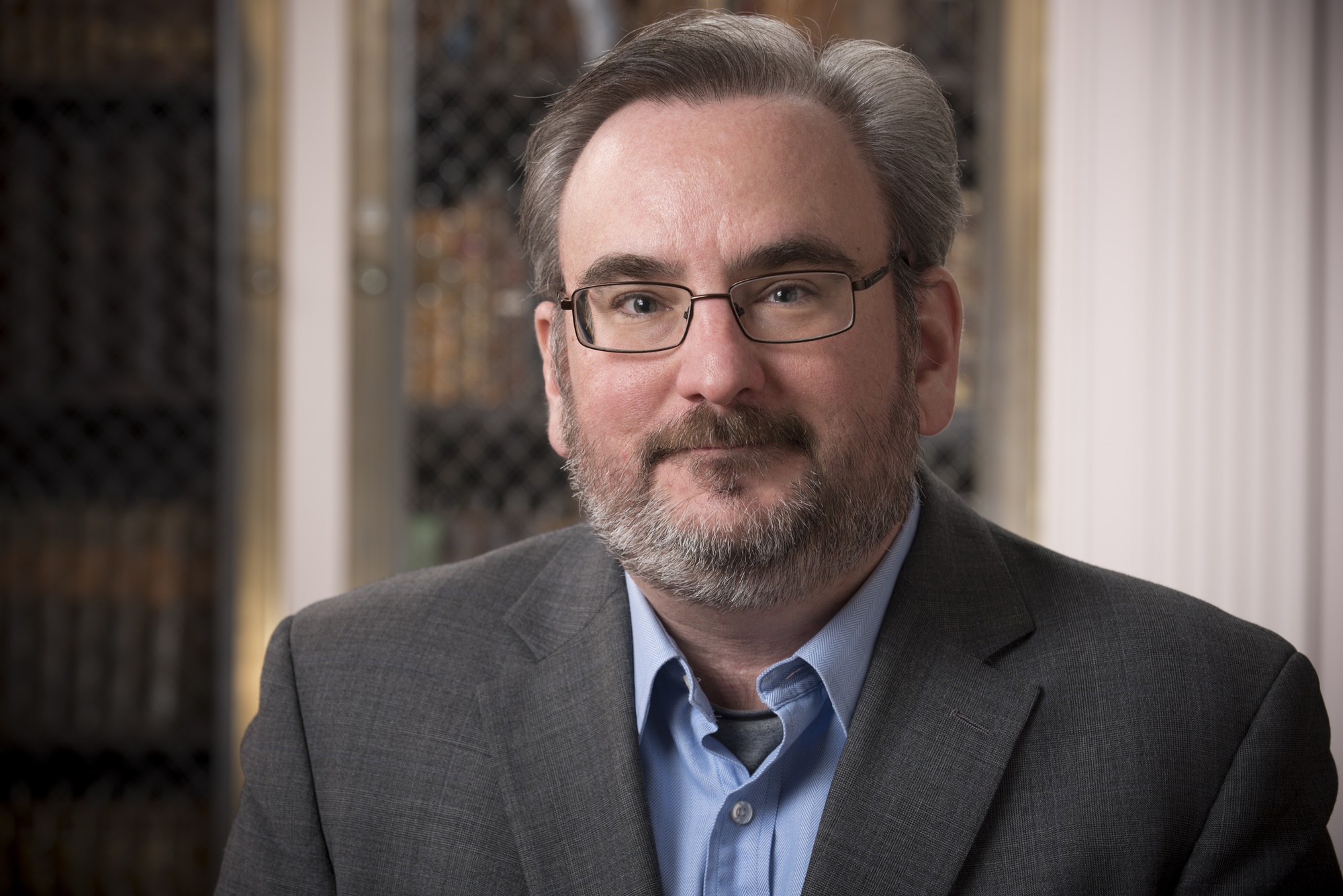 The Heart of Harvard’s Houghton Library

Despite being a soft-spoken lover of books, John H. Overholt is not your typical librarian.
By Nicole B. Farina

Despite being a soft-spoken lover of books, John H. Overholt is not your typical librarian.

Overholt’s official title at Houghton Library is “Curator of the Donald and Mary Hyde Collection of Dr. Samuel Johnson and Early Books and Manuscripts.” Responsible for almost all of Houghton’s pre-1800 materials, Overholt manages a great deal of the library’s collection.

But in his spare time, Overholt shares his knowledge of and experience with rare books to the rest of the world. In 2002, he went on national television to compete as a contestant on Jeopardy; he won, despite incorrectly answering the literature-themed Final Jeopardy question.

“Alex [Trebek] actually said, ‘Now you would expect John Overholt, being a librarian, would know this one,”’ Overholt says. “And I said, “Yes, you would expect that,” when they revealed the wrong answer.”

Overholt uses his Twitter account for outreach, and he has amassed over 20,000 followers and 46,000 tweets since joining the site roughly ten years ago. He usually tweets several times a day. His content ranges from the relatable (“It’s really lovely out today. I’d go outside more often if the wi-fi was better,” accompanied with a photo of a half-empty beer on a backyard table - @john_overholt, 10/13/2019) to the things that only a rare books librarian would say (“I whacked my knee hard into a marble column but I didn’t drop the medieval manuscript I was carrying. This has been my most curatorial tweet.” - @john_overholt, 10/19/2019).

Overholt says his presence on the site helps “demystify” the experience of visiting a library like Houghton and interacting with rare books and manuscripts.

“I really love sharing the things that I’m doing, not just with other colleagues, but with people who just think books are interesting, because I think they’re really interesting, too!” he says with a smile.

Overholt has worked with rare books since he was an undergraduate at Washington University in St. Louis. He started at Houghton in 2004, and in June of this year, his role at the library expanded dramatically, as he became responsible for most of the pre-1800 collection.

When making new acquisitions for Houghton, Overholt concentrates on finding unique copies of books –– such as those with annotations from early readers, or mistakes in a first edition printing –– which produce feelings of connection to the people who made and used them in their time period.

One of Overholt’s favorite items is known as The Little Gidding Harmony, or as he calls it, a ‘cut-and-paste’ Bible. In England during the 1600s, the women of a small religious community fashioned clippings from Matthew, Mark, Luke, and John into one continuous narrative of the Gospel that better suited their tastes than a conventional Bible. They took great pride in the construction, even adding illustrations from other sources. The women then used the book in their everyday lives.

“That [book] feels so personal and powerful to me,” Overholt says.

He is also interested in materials that were not intended for preservation. For instance, cheaply produced and widely-disseminated publications might have sold thousands of copies, but because few people thought they were worth saving, such an artifact may exist in very small numbers today. Acquiring one of these unique pieces, Overholt says, can drastically increase the knowledge we have about culture at the time of publication. “I'm very interested in collecting that kind of stuff because it's got so much more opportunity to change what we know.”

Overholt emphasizes the importance of understanding Houghton’s materials as physical objects because their tangible qualities reveal just as much as, if not more than, their internal content. The design and layout of the books reveal information about the artifact’s time period and context, keeping in-person visits to Houghton relevant even as its materials become increasingly digitized.

Although Houghton’s publications are from the increasingly distant past, the library is facing towards the future. In an effort to make the library more accessible, Houghton is undergoing renovations until autumn of 2020.

For the past 77 years, Houghton’s lobby was devoted to displaying bookcases full of works written by upper-class white men. While Overholt notes the importance of these authors and their influence, he recognizes that exhibiting an unvarying collection of materials is no longer representative of Houghton’s vision.

“We’re putting in new display cases that will, instead of just being a spine, be designed to display individual pieces out and open, and to rotate them so that you’re constantly seeing new things every time you come into the library. I think that’ll give a much more realistic impression of what kind of place we are, what we do, and why you might want to keep coming back.”

“I want us to feel like a friendly place, a place that’s welcoming, and a place that’s excited to have you come in and have an experience with something neat in our collection,” he says. “Because we’re just as excited about it, too.”