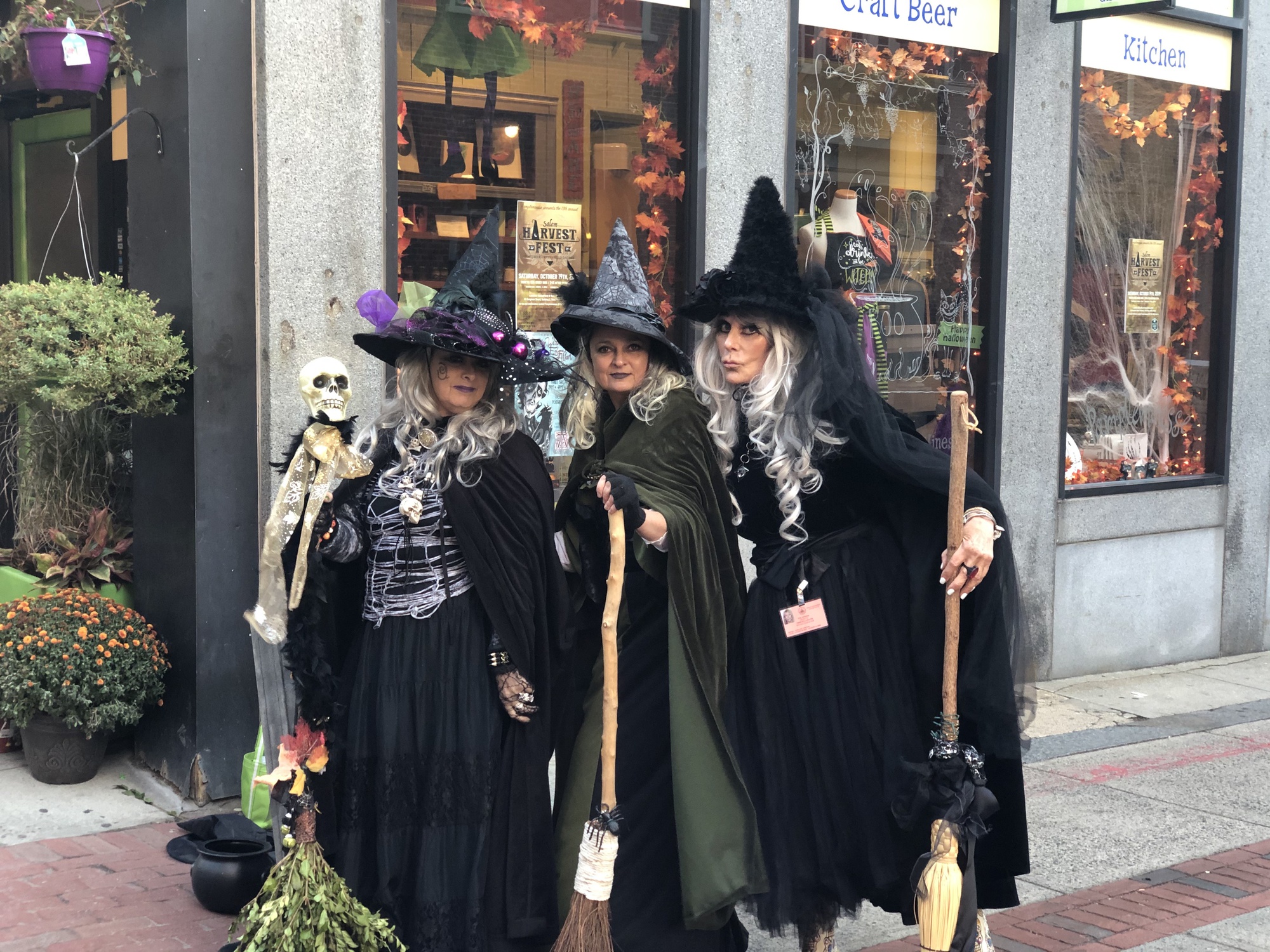 So a Witch, a Voodoo Master, and a Warlock Walk Into a Market...

We’re stuck behind a cluster of middle-aged women clad in black tulle and felt witch hats. It’s early on a Friday evening in Salem, Mass., and after unsuccessfully trying to locate the Psychic Fair and Witch’s Market, which we traveled 26.2 miles to visit, we decide it’s a safe bet to follow the gaggle of witches.
By Nicole B. Farina and Roey L. Leonardi

We’re stuck behind a cluster of middle-aged women clad in black tulle and felt witch hats. It’s early on a Friday evening in Salem, Mass., and after unsuccessfully trying to locate the Psychic Fair and Witch’s Market, which we traveled 26.2 miles to visit, we decide it’s a safe bet to follow the gaggle of witches. Sure enough, they lead us onto Essex Street, which is lined with vendors selling everything from dracula teeth to incense to beetles preserved in amber pendants.

Among the vendors are street performers dressed as every imaginable Halloween villain: a Frankenstein poses for a picture with his hands around two tourists’ necks, a green-faced warlock needles a passerby. “What? Are you scared?” he teases.

Almost all of the businesses we pass repackage Salem’s dark history of witch trials into cute, kitschy attractions. There’s a haunted house and a Museum of Monsters, both crowded with hordes of eager patrons. Multiple stores pack their shelves with decks of tarot cards, enchanted candles, and healing crystals. Many of the street vendors hawking face paint and henna tattoos have shown up expressly for the spookiest month of the year, though permanent establishments like Witch City Ink offer tourists a more permanent memento of their time in Salem year-round.

The energy of those working at the festival is matched by its patrons. There is no shortage of graphic tees emblazoned with witch-related puns — both draped across mannequins and sported by attendees. A bright-green souvenir shop offers “I Got Stoned in Salem” and “I Practice Bitch-craft” shirts. We spot one attendee wearing an orange tee boasting that she is, in fact, “100% THAT WITCH.” Some visitors even don full-blown costumes, including colorful wigs and dramatic stage makeup; the only thing distinguishing them from the street performers is the lack of a tip jar.

We approach three silver-haired witches, each wielding a broomstick, midway through posing for a photo next to a little girl. The photographer who accompanies the witches introduces the group as “Priscilla and the Girls.” The witches explain that they volunteer with other street performers, collecting tips to donate to local charities. “We engage the crowds: the tourists, especially the children — and we put some spells on some people we do not like,” Priscilla jokes. She points across the street and shivers: “Jason’s over there,” she says, referring to a performer dressed as the killer from “Friday the 13th.”

“I hate that mask. He scares me a little bit... and I’m a witch!” Luckily, there’s a supernatural solution for such a human response: “I could probably make him disappear!”

Throughout our conversation, the witches slip in and out of character. Priscilla shares that, during the rest of the year, she works as a minister; she’s going to Punta Cana to marry a couple in February.

The other essential player in this season’s festivities is the Psychic Fair. Housed in Witch City Mall, professional psychics give readings from curtained booths surrounded by spellbooks and charms. Their services are in such high demand that additional tables have been set up in the space between a New York Deli and a costume shop.

Visitors fish crumpled bills from their purses, happily parting with $40 for a fifteen minute glimpse into their future. We were skeptical that we could discern our entire futures in the middle of a shopping mall, but in the name of journalistic integrity, we found ourselves separated from one another and seated in folding chairs for our respective palm and tarot readings.

First up: me, Roey. I approach a palm-reader, a middle aged man in a plaid newsboy cap. He prefaces the reading with a reminder that the future is not set in stone, reassuring me that “you have more magic than any of us, because you have free will.” He proceeds to give the lines in my hands glowing reviews. He’s especially impressed by my heart line, which ends in the “holy grail” between index finger and middle finger, indicating a balance of idealism and narcissism. This clue, combined with what he dubs the steadiness of my life line, leads him to the mystical conclusion that, “you got your shit together, kid.” I’m too flattered to tell him that the inaccuracy of his prediction will surely make me a skeptic for life.

When I, Nicole, sit down for my tarot card reading, the psychic asks me to shuffle the deck of cards to infuse it with my energy. The psychic spreads out the shuffled cards in front of me, and I choose three. She places them between us, face down, and explains their significance: the first card provides insight into my last nine months, the second my ‘now,’ and the third, my next nine months. In our fifteen minutes together, she flips over each card one at a time, revealing first “The Lovers,” then “The King of Air,” and then “The King of Earth.” The descriptions she gives of my love life are eerily accurate.

We reconvene after our brush with the supernatural, feeling, if not wiser, then at least satisfied that we’ve partaken in the full Salem experience. As we head back to the train station, we share an affectionate smile at the sight of an older witch smoking a cigarette and dancing a jig with a warlock. Then, an email from our editor notifies us that we may not be reimbursed for our $40 fortunes, leaving us to wonder if Priscilla and the Girls put a curse on us.