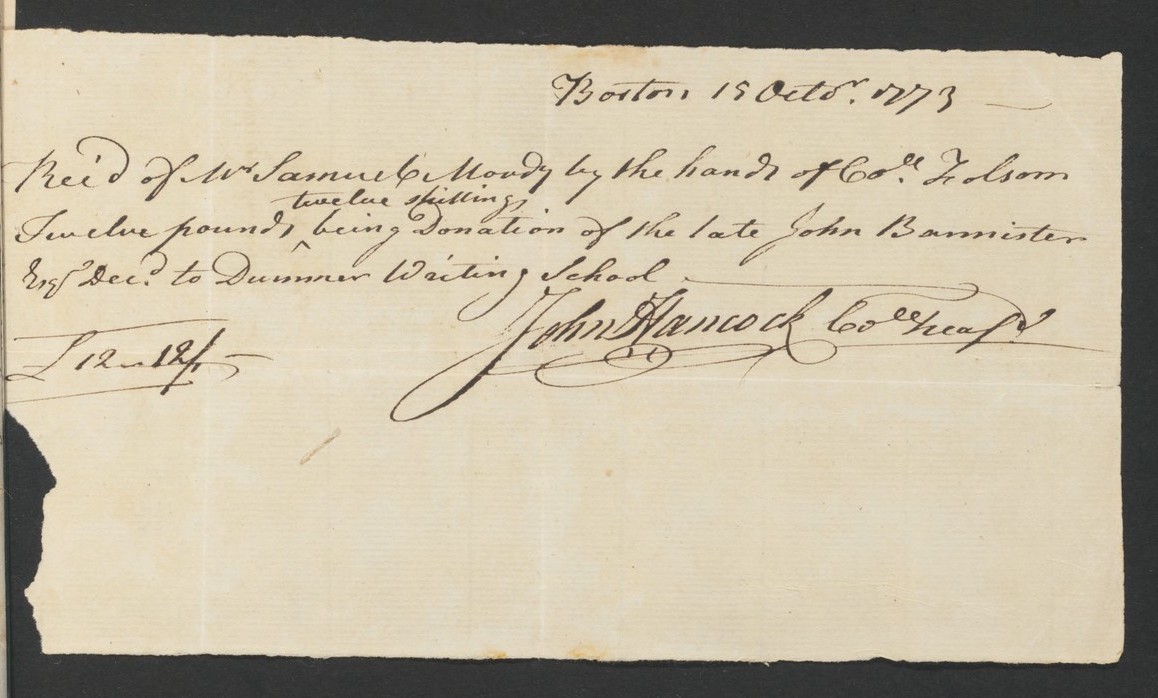 A receipt from October 19, 1773 signed by John Hancock for a gift from John Bannister to the Dummer Writing School.
Advertisement
Advertisement

But once his patriotic duties came calling, barely a year after his appointment, Hancock abandoned the post without officially resigning.
By Fiona K. Brennan and Aiyana G. White

John Hancock – graduate of Harvard College Class of 1754, revolutionary leader, president of the Second Continental Congress, and first signatory of the Declaration of Independence – was also the Treasurer of Harvard University beginning in 1773.

Hancock was in charge of the University’s financial accounts and was supposed to give then-University President Samuel Langdon reports on the state of the treasury, especially for the semiannual meeting of the Overseers of the University.

But once his patriotic duties came calling, barely a year after his appointment, Hancock abandoned the post without officially resigning. He took with him large sums of money, about £15,000 in cash and securities, and important information about the University’s financial accounts, sparking a back-and-forth between Hancock and Langdon that would continue for several years.

In November 1774 and January 1775, Langdon sent Hancock two letters reminding him of his duties as treasurer, but to little avail – Hancock didn’t respond until months later in March 1775.

Hancock may have been involved in the fight for the creation of our nation, but Harvard wanted its money and its report on the treasury.

At first, Langdon was relatively understanding of Hancock’s critical role in the Revolution and dealt with him patiently. “We are very unhappy in being again & again disappointed of an opportunity of setting our Treasurer’s Accompts,” Langdon stated in a letter to Hancock in April of 1775. “We know your Patriotic exertions in your Country’s cause, & are willing to allow much to this plea for the delay of our affairs hiterho.”

But if Hancock did not back down to the power of the British Empire, he certainly would not give up easily in a fight with a mere university president. Just days before the first shots of the Revolutionary War were fired in April 1775, Hancock found the time to scribble a response to Langdon’s complaints.

“He is much surprised & astonished at the contents of the President’s letter as the doing of the gentlemen present, which he very seriously resents,” Hancock wrote, referring to himself in the third person.

By March 1776, the Revolution had arrived at Harvard in full force. By this time, it had been over a year since Hancock had abandoned his role as treasurer, and Langdon was fed up. He penned a letter to Hancock describing the damages inflicted upon the University and imploring his return so that the financial situation could be addressed. 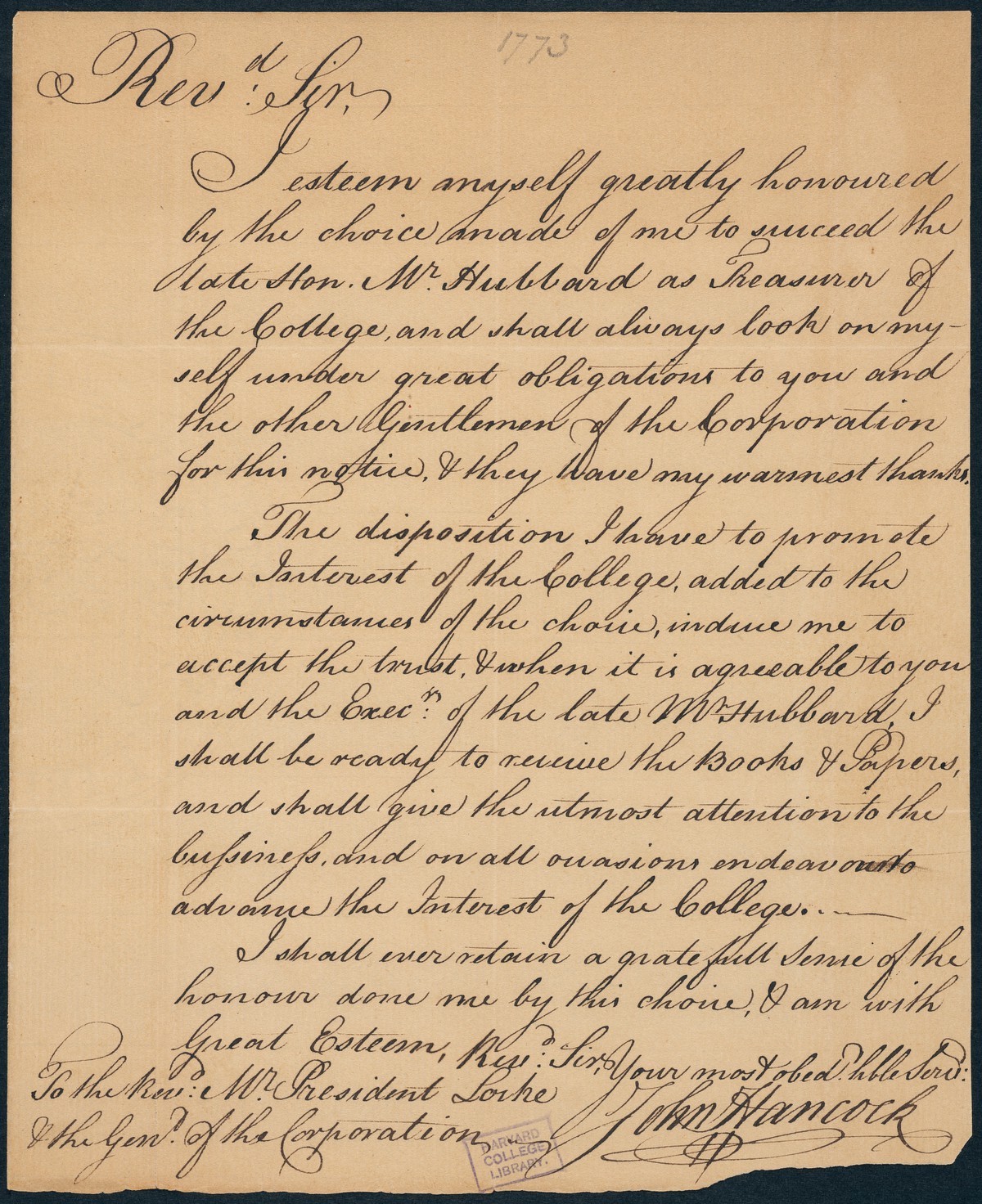 John Hancock wrote a letter in 1773 accepting appointment as Harvard University's treasurer, serving from 1773 to 1777 — concurrent with the American Revolutionary War. By Courtesy of Harvard University Archives 50.27.73
Advertisement

“The buildings are stores & barracks, their beauty is defaced, & it will be so long before the wastes, breaches, & ruins can be repaired...” Langdon wrote. “But, for want of access to our Treasury, nothing can either be receiv’d or pay’d out for defraying the current expenses of the Society.”

Hancock, preoccupied with the burdens of helping lead a country in its revolution, did not immediately reply. Langdon sent a follow-up letter a month later, reminding Hancock of his duties to Harvard and “renewing his urgent request to hear from [Hancock] speedily.”

Hancock responded with a flourish of platitudinal apologies, and offered to have another interim treasurer installed while he organized the forces of the Revolution. Langdon responded gravely: "you yourself, Sir must judge how far it may be consistent with your other Employments to continue in so important of Office of the College."

The stalemate in the battle between Hancock and Langdon pressed on. As Langdon became increasingly frustrated with Hancock’s dismissal of his responsibilities at Harvard, Hancock was signing America into independence and managing the Continental Congress as the British seized New York. By February 1777, Langdon was so infuriated that he wrote a 24 page letter to Hancock detailing all the ways he had failed to fulfill the job’s requirements.The game Langdon had been playing with Hancock was over — he was ready for an all out fight.

Hancock was not amused. Punctuating his irreverent letter with liberal underlining, he began by calling out “... the Corporation of Harvard College, of which I was once respected as a member.” Hancock made clear his displeasure with Langdon and the Harvard Corporation in a sophisticated clapback: “Surely I did not run away with the Property of the College,” he wrote, “no gentlemen, I sowed it.”

Hancock ultimately gave more than £16,000 back to the University, but did not pay interest on the money he had held nor did he turn over all of the treasury records. The Corporation was enraged.

In January of 1778, almost a year later, the Harvard Corporation received a curt letter from Hancock, who had recently learned from a newspaper notice in another state that Ebenezer Storer had been appointed as Harvard’s treasurer.

“A few days ago before my departure from Congress,” Hancock wrote to the corporation, “a Boston newspaper announced my dismission from the honorary appointment of College Treasurer...”

This advertisement, he wrote, “is the only information I have ever had of my dismission.”

His anger is only barely contained by his heavy handed script. It is hard to decide which is more unbelievable: that Hancock didn’t anticipate his removal or that Harvard waited over a year following their altercation to enact it.

Harvard’s financial records may not have had the same nationwide impact as the Declaration of Independence, but his famed signature still graces them both. And while he may have created a new country through the Revolutionary War , he didn’t escape the watchful eye of Samuel Langdon unscathed.