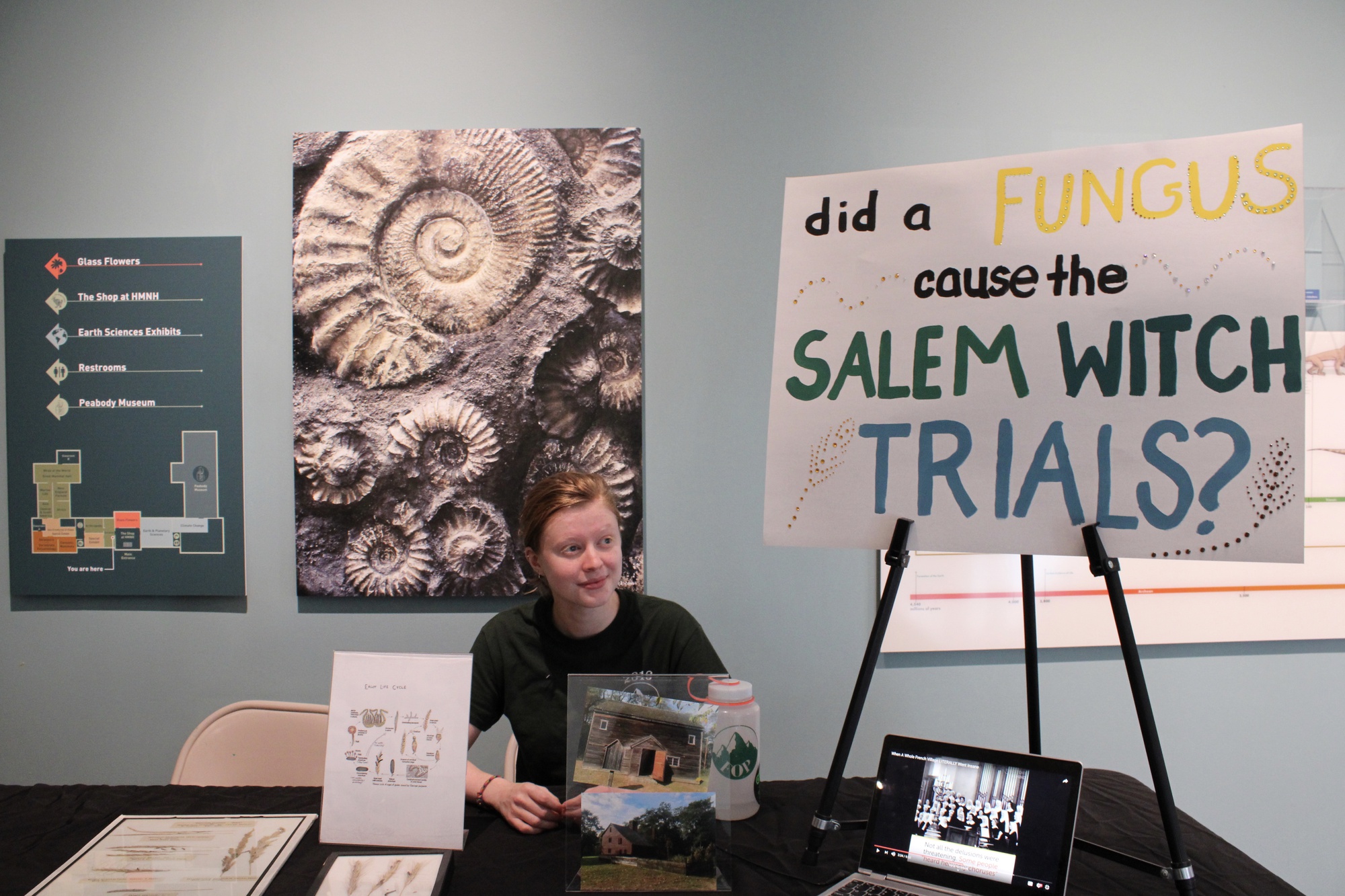 Elizabeth U. Keeley explains a possible connection between a fungus known to cause delirium and the Salem Witch Trials.
Advertisement
Advertisement

Fantastic Fungi and Where to Find Them

The quiz booth presenters say that most people wish they were black truffles, but only one person has yet attained this status.
By Saima S. Iqbal

Nestled between exhibits displaying glass flowers and preserved mammal specimens, I see them: dried mushrooms with stems as thick, tough, and red as walking canes; samples of lichen that resemble curled up gyro meat; and cotton-white fungi peeking out of preserved ant bodies. Each time I pass another shroom-themed booth, it feels as if I’ve stumbled upon a hidden treasure.

It’s a warm Saturday afternoon at the Harvard Museum of Natural History. Visitors are lining up for tickets by the minute, but it’s hard to parse who is here to gaze at the rare minerals from who is here to stroll through the sixth iteration of the Fabulous Fungus Fair.

Students from Systematic Botany professor Donald H. Pfister’s class, Organismic and Evolutionary Biology 54: “Biology of the Fungi,” staff booths featuring mushrooms with industrial applications (the thick red ones are as hard as concrete and can be used as bricks), symbiotic superpowers (the lichen’s dual identity as algae allows it to absorb toxins), and stealthy parasitic properties (Ophiocordyceps unilateralis, the white fungus, hijack the minds of ants it infects.)

Young children zoom through the interactive exhibits, rubbing mushrooms between their fingers and playing fungus-inspired versions of their favorite board games. In “Fungus Operation,” they carefully extract parts of the fungus body: a portion of the cap, the gill, the stalks. In “Fungus Land,” they slide their mushroom-shaped game pieces down a winding path to “Shroom Stop.”

Amidst the elementary school chaos, some college-aged girls stop at the Operation Station and ask a student working the booth how to detect an edible mushroom from an inedible one.

Pfister says it’s not uncommon to see adults at the Fabulous Fungus Fair.“Fungi are making more and more appearances in the news now. Many 20- to 30-year-olds are interested in eating healthy and the environment,” he explains. In his experience, a newfound cultural interest in fungi has manifested in a surge of media inquiries about the fungal types and properties. 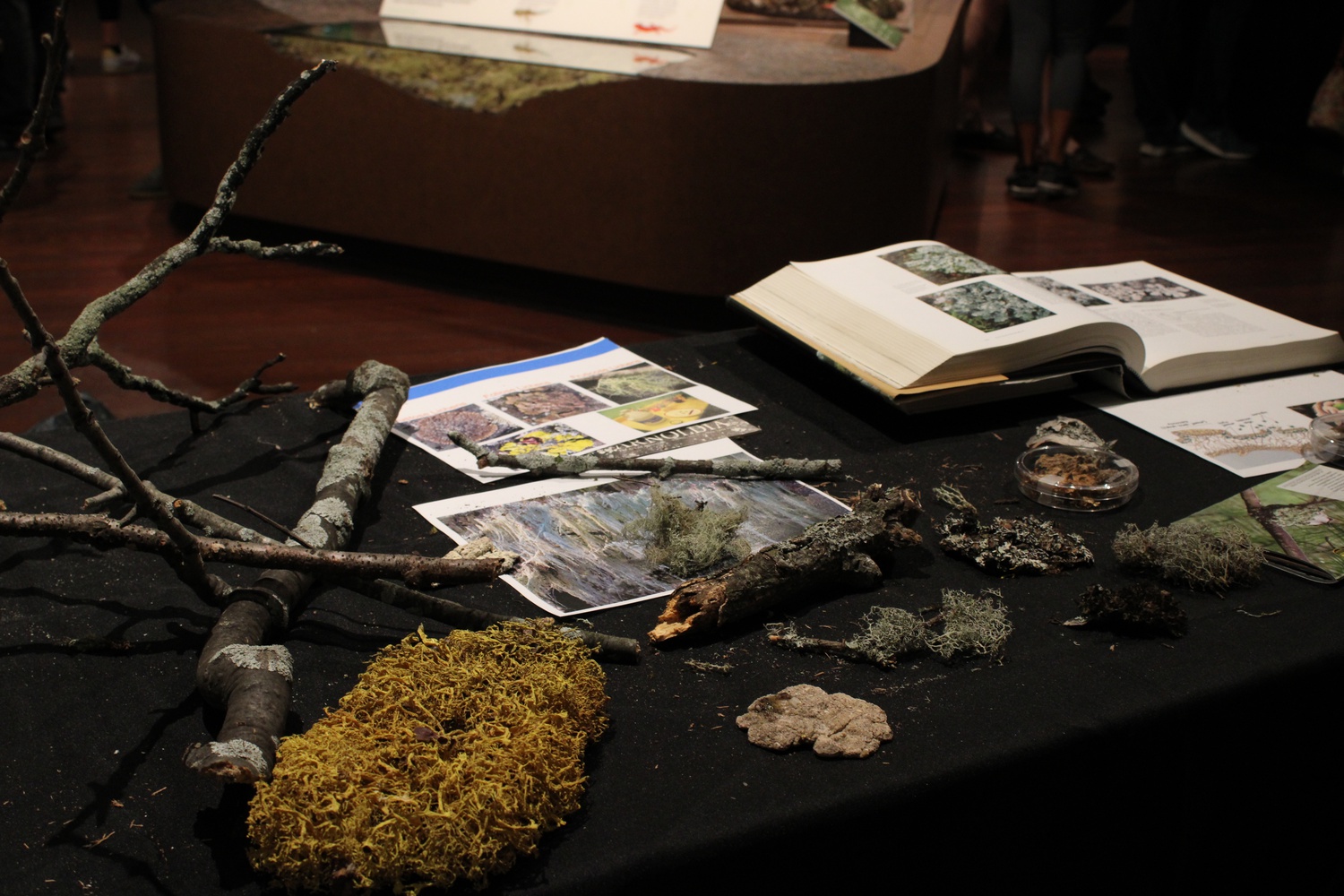 The girls make their way to a quiz station to answer a pressing question: What fungus are you? The Buzzfeed-esque quiz asks about their favorite climate and solicits three adjectives describing their personalities. It turns out that I am a mushroom that grows in the chilly depths of Antarctica, as are most festival attendees. The quiz booth presenters say that most people wish they were black truffles, but only one person has yet attained this status.

When the first Fabulous Fungus Fair took place in 2012, the museum had just opened its New England Forests Gallery. While this gallery included a minimal fungi presence, museum administrators sought to expand programming on what one student calls “the often-forgotten third kingdom.”

Wendy Derjue-Holzer, the museum’s education director, co-founded the fair with Pfister. She says it not only “gives the public a broader sense of what fungi are and of the important role they play in the ecosystem” but also “gives students the chance to practice communicating with the public, to practice teaching, rather than learning.”

Pfister hopes that the visuals will help draw people in and make microbiology more accessible. He first fell in love with fungi while growing up in rural Ohio, “fascinated by the things [he] saw growing on corn crops.”

His students smile at children, gesture enthusiastically at their live specimens, and tour their classmates’ booths. Clayton Ziemke, a student in Pfister’s course, said that he enjoys working at his station since he does not have many opportunities to interact with kids as a laboratory technician. Over the course of two hours, he has learned to speak the language of curious children, and settled on a few “standard catchy terms” that they seemed to understand best.

As children scamper out of the exhibit, Pfister tells me a story. The day prior, several students had asked him to collect a specific strain of mushrooms for their exhibit the next day. He didn’t make any promises, but on his walk home he suddenly noticed a cluster of the very same fungi.

“Once you tune in and look for them,” he says, “you see the world in a different way.”