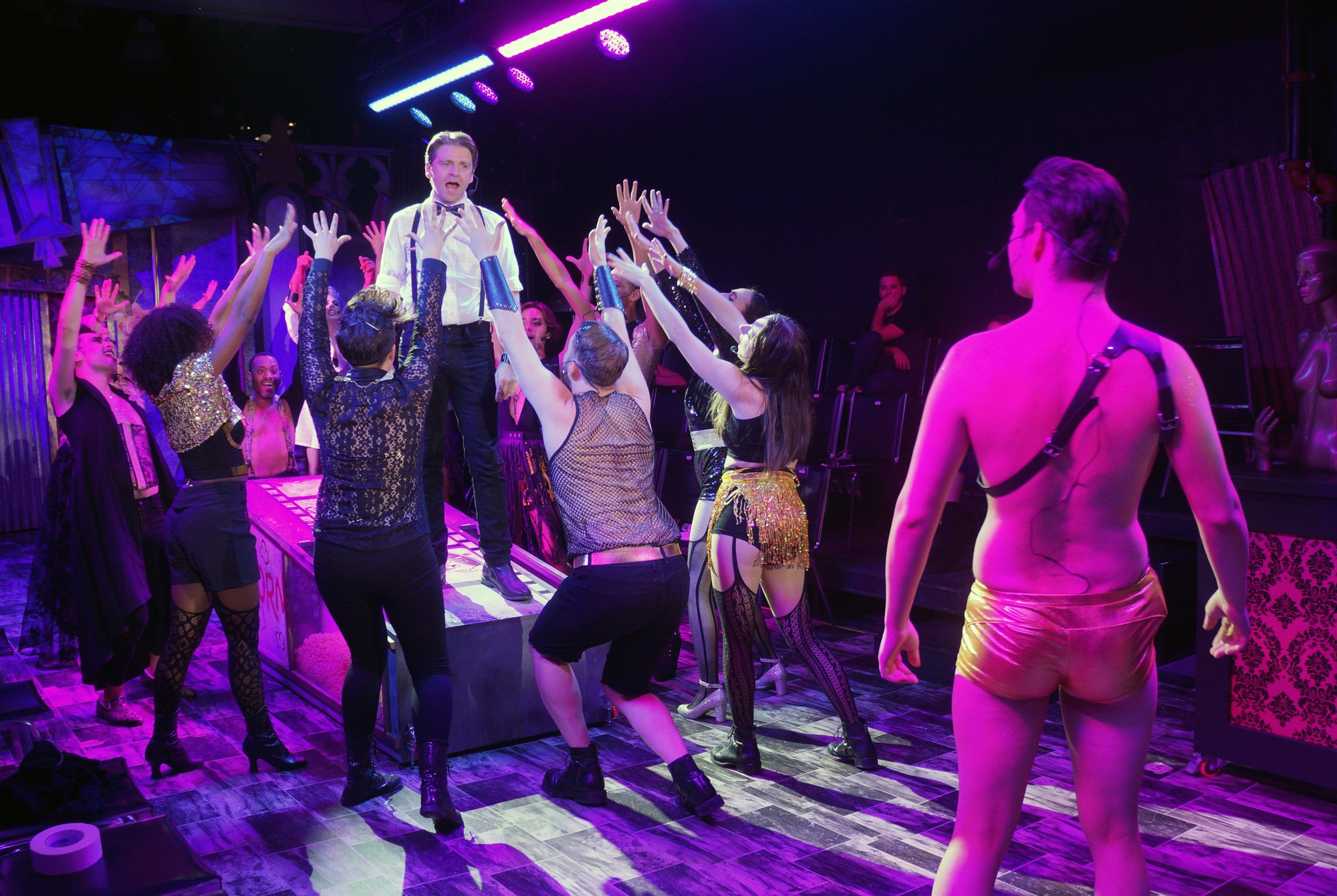 "The Rocky Horror Show", a live theatre production in Harvard Square, runs Oct. 17 to Nov. 2 at 25 Brattle Street, a prime retail space that has been vacant since December 2016. By Courtesy of Sharman Altshuler
Advertisement
Advertisement

Amidst the mallification of the Square, Rocky Horror inspires a new generation of followers while paying homage to the decades-long history of its showings in Cambridge.
By Kevin Lin

In bold red text, Moonbox Productions makes it abundantly clear that they will not permit me to throw toast, rice, or water on stage. Instead, I am free to shush Eddie; sing with the Phantoms; internalize, then verbalize, that Brad’s an “asshole” and Janet’s a “slut”; and, in case my throat gets sore from overuse, make lewd gestures.

When I see the venue for the Cambridge production of The Rocky Horror Picture Show, the carb and water prohibition makes complete sense. It is a glorious set — part movie theater, part cabaret with a bar, part bankrupt retail store: an “Everything Must Go” banner and mannequin limbs line the proscenium arch.

The space was formerly a local candy store, Hidden Sweets, which was then replaced by its more corporate successor, a Lululemon popup. Now, it has been gutted for Rocky Horror’s return to Harvard Square.

In 1984, Boston’s Full Body Cast performed the first staged Rocky Horror show in the United States at the Harvard Square Theater, an act that would continue to run for 28 years until the theater closed in April 2012. David S. Lucey Jr., the director of this production of Rocky Horror, remembers the tradition fondly.

“It was always a unique experience — always boisterous and fun,” he recounts. “Everyone was always welcoming and had a great time. It was sort of this gathering of people in a safe space where we could all be a little weird.”

Lucey mentions during our interview that he was “a weird kid” — something Rocky Horror fans seem to have in common. A woman who goes only by Will says that her mother first told her Rocky Horror was “something for the freaks and outcasts,” she says. “And she told me it was something that I would like.”

“[Rocky Horror] has always resonated with me since I was a kid,” Will says. She came to the show dressed as a female version of Rocky, in a gold lamé sports bra and a platinum-blonde Elsa wig from “Frozen.”

Rocky Horror’s return to Cambridge is one of rebellious triumph, occurring again amidst the closure of longtime Harvard Square staples. In addition to the shuttering of the Harvard Square Theater and Hidden Sweets, John Harvard’s Brewery and Ale House, The World’s Only Curious George Store, Crema Café, and Tealuxe all closed their doors within the last year. Rocky Horror’s lead actor Peter Mill describes these closures as the Square becoming more “corporate” and “sanitized.”

“You go out there, and you see so many corporations coming in, and you see all these high end restaurants and all these branded stores,” says Mill, who stars as Frank N. Furter in Lucey’s production. “I mean, you're losing some of the landmarks.”

This is why Rocky Horror’s creators wanted to bring back something “that's kind of reminiscent of what [the Square] was and what it still can be,” Mill says. 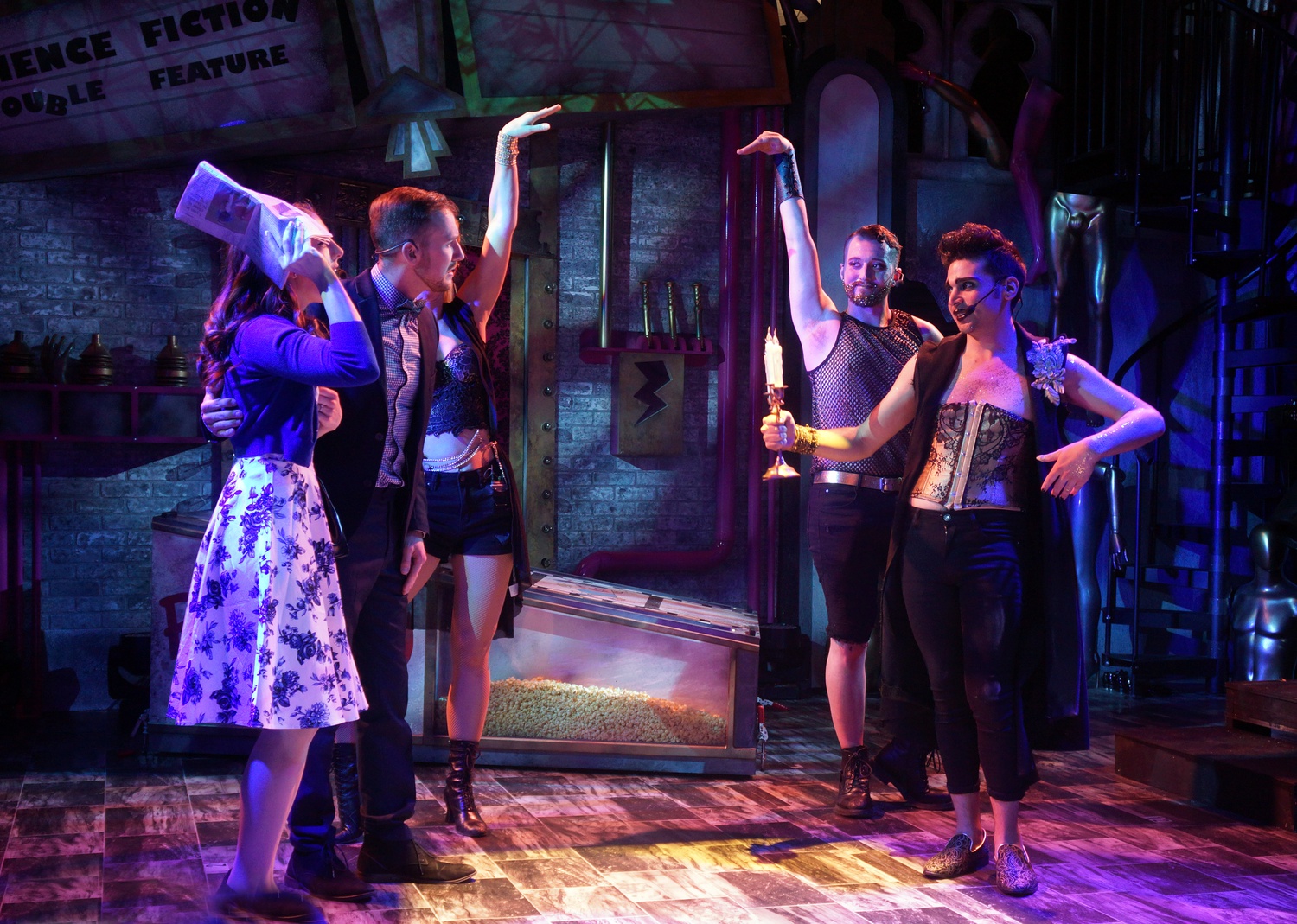 Luminaire flood lights in jewel tones and Pepto-bismol pink spill onto the crowd; they illuminate a woman’s gold top, the 2.5-inch-long septum piercing of a man wearing a miniature top hat, and a woman’s Hillary Clinton sweater — not a Hillary Clinton 2016 campaign sweater, but a sweater tessellated with Hillary faces. The dress of the crowd ranges from corseted men wearing sheer black briefs to a simply dressed woman in a teal, floral-patterned blouse and classic light wash ‘mom’ denim.

As the opening number, “Science Fiction - Double Feature,” plays, shyer audience members lipsync while the more intrepid belt out the lyrics. The Phantoms, Rocky Horror’s interactive “ensemble,” slither among us, dissolving the boundaries of cast and audience, inspiring participation.

The cast’s performance is as clean as it was dirty, much like its “callbacks,” the Rocky Horror-specific term for the banter between actors and spectators.

Even so, it is the “Time Warp” that distinguishes the true Rocky Horror “sluts” — die-hard fans like Blair Trippe, who attended the first showings at the Waverly Theater in Greenwich Village while in high school — from the “virgins,” Rocky Horror newcomers like longtime Cambridge resident John A. “Jay” Shetterly ’66. Shetterly missed the early Harvard Square Theater days of Rocky Horror while serving in the Peace Corps and seized the opportunity to see their revival.

Amidst the mallification of the Square, Rocky Horror inspires a new generation of followers while paying homage to the decades-long history of its showings in Cambridge. To Mill, it acknowledges and attempts to reinvigorate the quintessentially Cambridge art scene.

By the production’s end, I feel indoctrinated into a decades-long Time Warp legacy of Rocky Horror showings. As Mill says, Rocky Horror is “an equalizer”; “It unites people in our differences, [in] being as freaky or as outlandish or as bold as we want to be.”