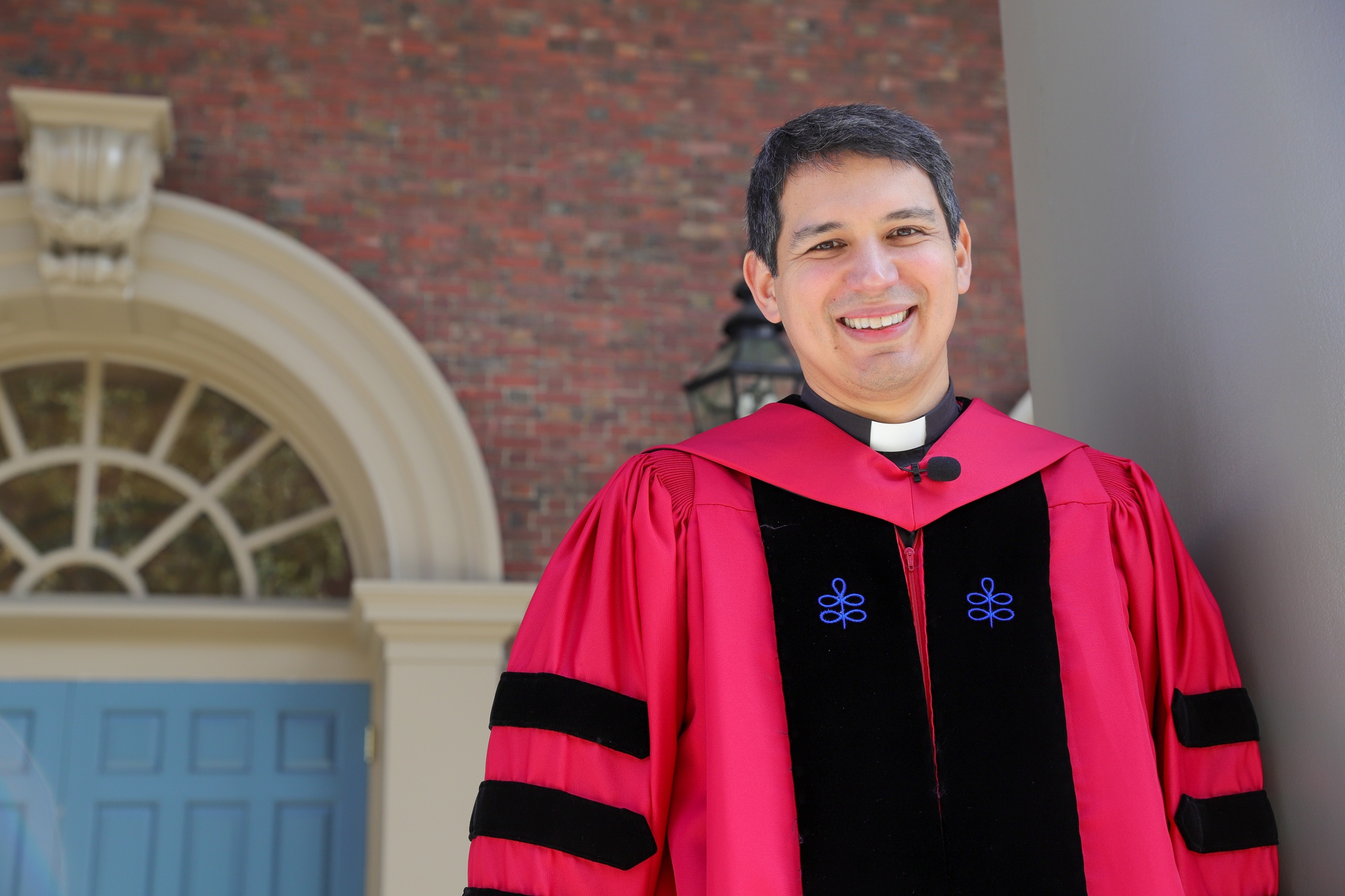 Matthew L. Potts, Associate Professor of Religion and Literature and of Ministry Studies at Harvard Divinity School, is interested in how "Jesus Is King", Kanye West's new album, "plays with a tension in Christianity between the high and the low, the sacred and the mundane."
Advertisement
Advertisement

Next Up On Harvard Divinity School’s Playlist: Jesus is King

From being "broken down" by the Devil in "The College Dropout" to proclaiming himself a god on "Yeezus," Kanye West now "bows down to the King upon the throne" in his latest release "Jesus Is King," a self-proclaimed gospel album. While some gospel artists have embraced the album, music critics have largely dismissed it as inauthentic.
By Saima S. Iqbal and Garrett W. O’Brien

From being "broken down" by the Devil in "The College Dropout" to proclaiming himself a god on "Yeezus," Kanye West now "bows down to the King upon the throne" in his latest release "Jesus Is King," a self-proclaimed gospel album. While some gospel artists have embraced the album, music critics have largely dismissed it as inauthentic. They also say that his regularly-held private gospel concerts, which he calls Sunday Services, are a self-serving way to profit from religion.

To assess the religious resonance of the album, FM turned to the most obvious source on all things Kanye: the Harvard Divinity School. Specifically, professor Matthew L. Potts, who studies the intersection of Christianity and culture through literature.

Potts first heard about Kanye while working at a Catholic homeless shelter in Phoenix, Az. A guest explained to him that “Jesus Walks,” one of Kanye’s most famous songs, accurately reflected his own relationship with God. Potts was surprised that Kanye could connect so deeply with people. Potts says Kanye “has evidently put his own faith into [“Jesus is King”],” producing “emotionally and religiously resonant music.”

Potts believes that while Kanye’s Sunday Services may be exclusive celebrity events, there is something to be said for “music realized in a Christian setting.” He refuses to say that the album “is not gospel music.” He also sees little difference between the exclusivity that people critique about Kanye’s services and televangelists, who are paid to preach on public broadcasting channels,, for instance, and that it would be “unfair to single out” Kanye for this type of gathering.

As any tabloid from the last decade is quick to reveal, Kanye hasn’t lived a traditionally Christian lifestyle in the past. However, Potts notes that struggling to find faith makes for a convincing Christian leader. Potts compares Kanye to the Apostle Paul, who describes himself as the “worst of sinners” in the New Testament. Potts says that “part of the authenticity of [Paul’s]conversion” came from his sinful beginnings, and Potts argues that Kanye’s conversion represents this same level of authenticity.

Kanye himself underscored this connection to Paul — in his last album, “The Life of Pablo,” he directly compares himself to the Apostle. Potts points out that West deals with his past on the track “Selah” and invokes the understanding that God saved him and his past is no longer important which “is a belief that is deep in Christian history.”

Between bars about his own wealth and power, Kanye shows off his command of Christian theology, making sprawling references to everything from the well-known hymn “Amazing Grace” to verses from the Gospel of John. In “Selah,” he rhymes, “Everybody wanted Yandhi/then Jesus Christ did the laundry,” alluding to an iconic image of the blood of the Lamb washing away the world’s sins.

We expected Potts to find the line irreverent, even demeaning, but he interjects to tell us it’s his favorite. While some say “Jesus is King” is trite, he identifies deep meaning within it. “What’s so smart about it,” he says, “is that [Kanye] plays with a tension in Christianity between the high and the low, the sacred and the mundane.” After all, Potts quips, Martin Luther himself wrote that just as preachers find God while reading the Gospel, fathers should be able to find God while washing their children’s dirty diapers.

But Kanye goes beyond likening himself to just an apostle— he likens himself to Jesus Christ. On “Selah,” he imagines what it would be like to await crucifiction: “even with the bitter cup/forgave my brothers and drank up,” he says, referring to Judas’s betrayal of Jesus. To some, the line might seem egotistical. But Potts argues that Kanye is grappling with what one’s relationship to Christ should be. Many devout Christians seek to imitate Christ and aspire to his level of humility and kindness. During the Roman Catholic rite of the Eucharist, priests can “actually become” Christ. “What I think Kanye’s getting at,” Potts explains, “is that it is a prideful thing to say you can imitate the Son of God.”

Potts seems most interested in the points at which Kanye exposes his imperfections as a Christian. Take, for example, his controversial song, “On God.” in which he thanks God for the commercial success of his sneaker line, among other material things. While Potts personally disapproves of this emphasis on material success, he points out that Kanye is not unique in associating God’s favor with wealth: many churches in Southeast Asia preach the “prosperity gospel,” for instance. Besides, Potts highlights that Kanye himself admits that he’s unsure if he’s a good Christian.

Still, not all of Kanye’s provocative religious lines land as well.

Potts is quick to acknowledge that Kanye’s remarks on mass incarceration in “On God”— “All my brothers locked up on the yard/you can still be anything you want to be”—and public statements on slavery don’t “sit well with [him] at all.” In “Selah,” when Kanye claims that only God can free people from bondage, he drastically over-simplifies a complex theological argument.

While Potts doubts Kanye will remain as devout as he is currently, he hopes that Kanye will continue to blur the boundaries between religious and secular art and bring religion into public discourse. “Like any other human being,” Potts says, “he’ll always have to reinvent himself.”

“He’s so creative; I’m sure he’ll find a new mode to explore and practice his art.”