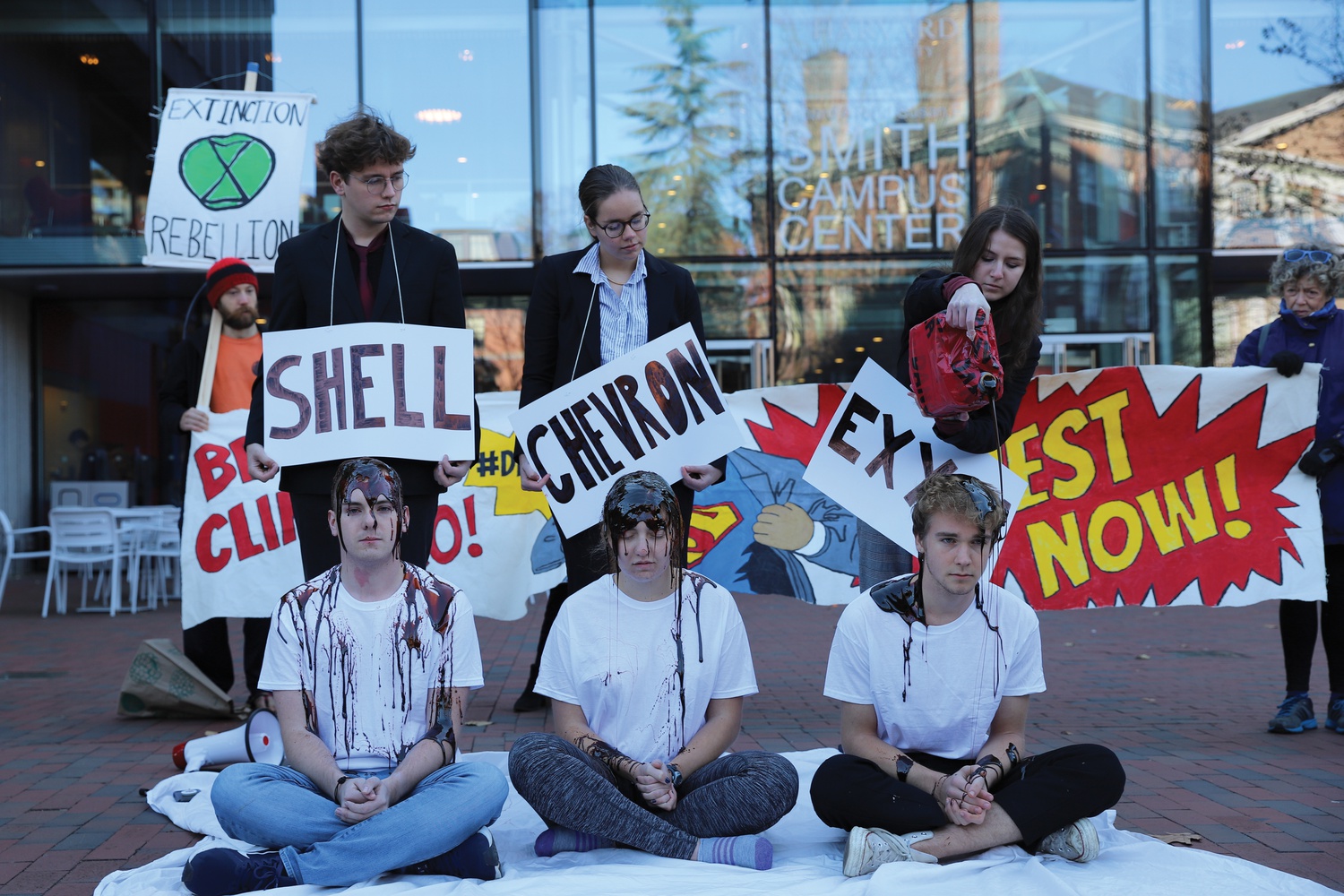 Protesters with the Harvard Divest movement staged a protest, in which they poured molasses — to represent oil — in front of the Smith Campus Center on Friday. By Suuba M. Demby
By Jasper G. Goodman, Contributing Writer

Organizers of Divest Harvard — a student group calling on the University to divest its endowment from fossil fuels — poured liquid meant to represent oil over their members' heads during a demonstration at the Smith Campus Center Friday.

More than 20 protesters from Divest Harvard and climate advocacy group Extinction Rebellion marched from the John Harvard Statue in Harvard Yard to the Smith Center to watch Claire Pryor ’22, Jaden “JD” D. Deal ’23, and Owen Torrey ’21 carry out the demonstration. The trio sat on white sheets while three other Divest Harvard members, wearing placards bearing the names of oil companies, drenched them with a thick, brown liquid meant to symbolize oil.

Protest attendee Miles A. Mcallister ’21 said the demonstration was “amazing.”

“My congratulations and gratitude to the performers,” Mcallister said. “That was really cool and special and powerful. I wish there were more people here to see what went on today.”

The demonstration came just one day after an Undergraduate Council ballot referendum showed that 69.3 percent of undergraduate voters believe Harvard should commit — by Earth Day 2020 — to complete divestment “as soon as possible” and produce a plan for doing so. Last year, 71.5 percent of UC referendum voters supported divestment.

Mcallister, who carried a sign at the protest that read “Harvard profits from climate change,” said that he voted to support divestment.

“If the University is going to broadly act that they’re leaders in the fight against climate change and sponsor research into it and things of that nature, their investment holdings need to also represent that,” he said.

Joseph Winters ’21, a Divest organizer who spoke at the event, told attendees that Harvard’s continued fossil fuel investment makes the school “complicit in the degradation of our collective future.”

“We — students, alumni, faculty, and community members — demand the divestment of Harvard’s over $40 billion endowment from the fossil fuel industry,” Winters said. 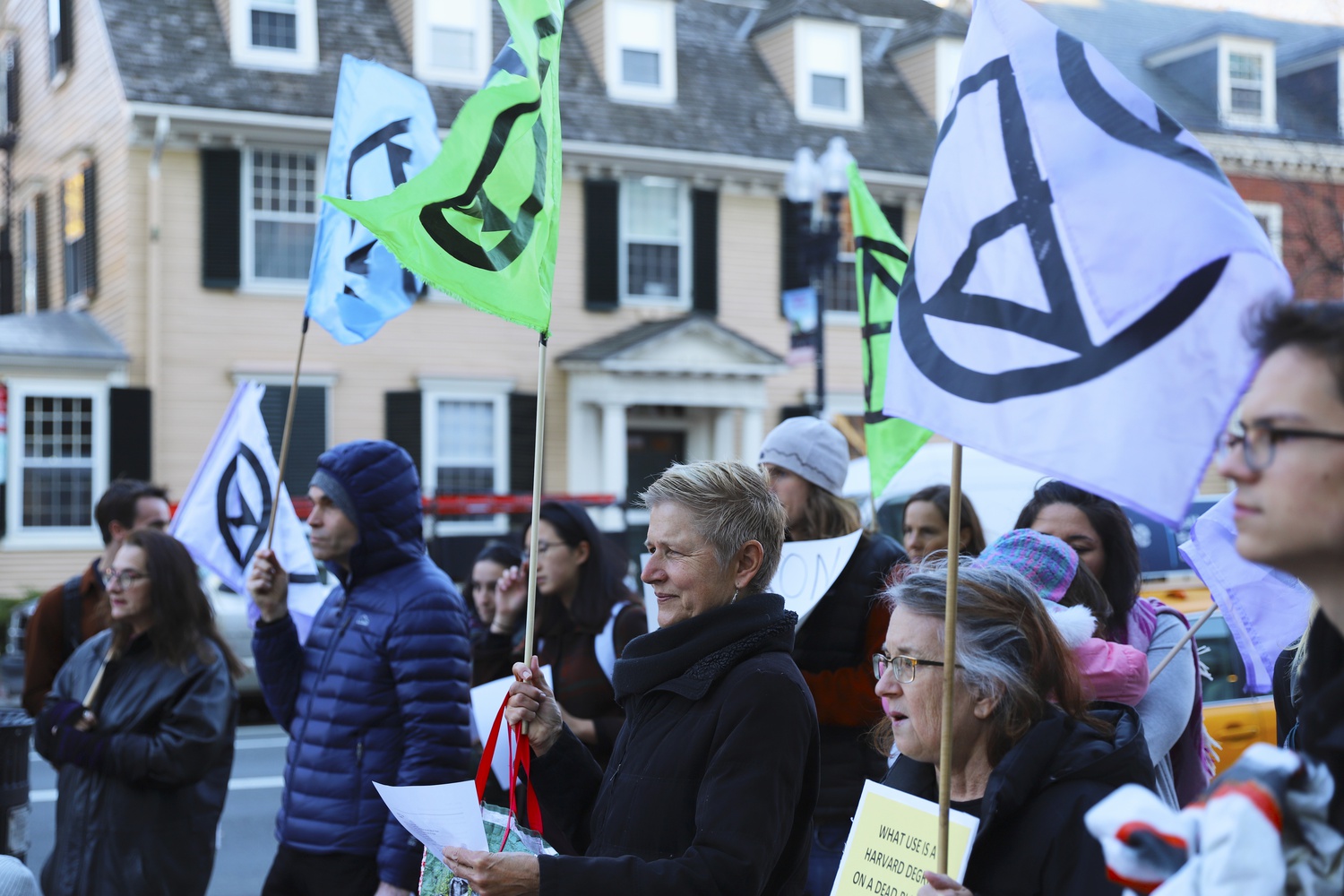 A crowd of protesters converged on Friday to urge Harvard to divulge its investments. By Suuba M. Demby

“While we agree on the urgency of this global challenge, we respectfully disagree with divestment activists on the means by which a university should confront it,” Swain wrote in an emailed statement. “Universities like Harvard have a crucial role to play in tackling climate change and Harvard is fully committed to leadership in this area through research, education, community engagement, dramatically reducing its own carbon footprint, and using our campus as a test bed for piloting and proving solutions.”

“As it has done for well over a decade, the University will continue to support its faculty, students and staff as they pursue a range of innovative and ambitious efforts to accelerate the world’s transition to renewable sources of energy and to help mitigate the catastrophic consequences of climate change that are already being realized,” he added.

Swain also pointed to Harvard’s climate action plan, which was introduced by former University President Drew G. Faust, which commits the University to ridding its operations of fossil fuels by 2050.

Winters closed his remarks to the crowd saying that the demonstration was meant to symbolize Harvard and the fossil fuel industry’s “extraordinary indifference” to fossil fuels' impacts on humans.

“We call out these bad actors and demand that Harvard take responsibility for its role in perpetuating the climate crisis and global climate injustice,” Winters said.